I’ve had this Sleek Major Morphosis eyeshadow palette for a while, I think it was way back in March when I bought it, but it disappeared off the Boots site so I wasn’t sure about posting it. Apparently it’s back and in Christmas offers so thought it’d be a good time to share as it’s got such a range of colours and finishes in it. You can find it for £12.99 on the Sleek website or on the Boots site, though I haven’t seen it in stores it might be available in your local if it’s got a larger Sleek Makeup display.

Most sleep palettes have 12 eyeshadows in them, this one has 18 so some extras, it’s also got a different style front of the plastic palette itself, but still has that big mirror that fills the lid and the nice click closure. It’s got a range of finishes, from mattes to foils and one with a matte base and tiny glitter in it. There’s a few of the shades that have a duochrome that are a nice wash to use with others, I think they’re the ones that give it the Morphosis part of the name.

END_OF_DOCUMENT_TOKEN_TO_BE_REPLACED 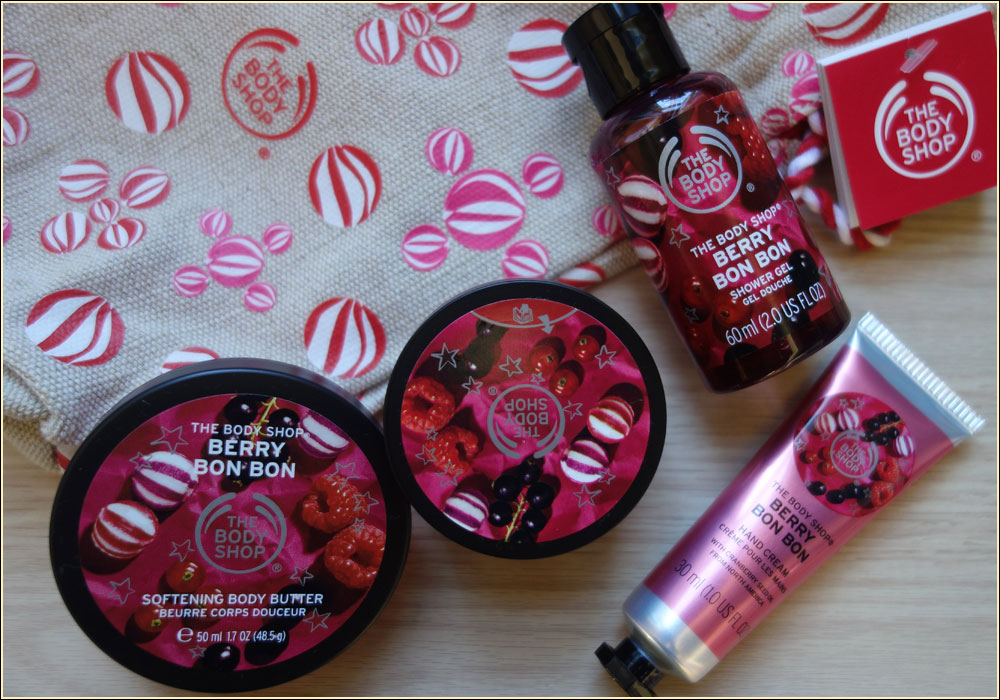 I’m always a fan of berry scents, I’m not sure why but there’s something comforting about them to me, so when I saw the Festive Sack of Berry Bon Bon Delights on the Body Shop website as early release online I had to try it. I tend to either miss out on limited edition Christmas scents from them because I don’t try them in time to know I like them or I order full sized and then they don’t agree with me for whatever reason. This sack of minis seems a bit expensive at £18 but if you bought these mini sizes separately they’d come to , so it’s actually a bit of a discount if you want to just see if you like them. Also it’s a cute sack and would be a great present for someone.

This set comes with four small sized products, they’re each the smallest size you can buy individually. It has a 50ml Body Butter, 50ml Sugar Body Scrub, 60ml Shower Gel and 30ml Hand Cream. As with everything from the Body Shop it’s all cruelty free. I think that’s a pretty nice range of products and the scent does actually change a bit depending on the base for the product.

END_OF_DOCUMENT_TOKEN_TO_BE_REPLACED

I think I’m going to be a bit late posting any sale hauls, the few other things I’ve bought haven’t arrived yet and I just haven’t done all that much sale shopping this year! I did, however, manage to get into my local Lush a couple of days after Boxing Day and it wasn’t too manic so I had a look round and bought a couple of gift sets and some other bits I was planning on getting. The reason this is part one of two is because my mum and sister went back and I asked them to get another gift box in the sale for me which has quite a bit more in it so this post would have been very long.

As some of these things may still be available in your local Lush I thought I’d do a mini, one or two line, review for each of the things in the sets as a first impressions. A few I’ve used before so I’ll either link to a review I’ve done or it’ll be more on experience than first impression as I’ve actually used them. Anyway, onto the haul and I hope you enjoy.

END_OF_DOCUMENT_TOKEN_TO_BE_REPLACED

A couple of years ago I bought the Soap and Glory Perfect Ten limited edition eyeshadow palette and I saw the one they brought out this year so I thought I’d buy the newer version too. I know they brought one out last year but my old one has got to the point where I’ve hit pan, for the first time ever in an eyeshadow, so I thought I’d see if the new one is as good as the old. There are some obvious differences, the colours chosen being the main one as the older one is mainly neutrals, this one has more smokey colours, and the fact that over half of the colours are mattes this time around but the range of colours in there still looked good so I gave it a try.

The Perfect Ten eyeshadow palette contains ten eyeshadows in a mix of finishes, there are 6 mattes and four with degrees of shimmer (one of them is probably more of a glitter than shimmer really). It costs £16 from Boots and is in the three for two offer on Christmas gifts. As it’s limited edition I’d say get it before Christmas if you’re interested as they sometimes appear in the sales after but last year they sold out before then.

If anyone’s interested the older one still seems to be on the Boots website, I’m not sure if it’s a permanent line product now maybe as it’s £10 but it does have exactly the same product names so I’m guessing they’re the same formula as the original. My original post on that one is one of my first posts and you can find it here, it does have a review of the colours in there and I’d say the old one is a good palette, it’s still one I use today so it must be doing something right.

END_OF_DOCUMENT_TOKEN_TO_BE_REPLACED

This is the second Pusheen gift set I’m reviewing and this one was definitely better than the bath fizzers set from Monday. This is the Pusheen Nail Art Set and costs £8 at Boots, though it’s in the Christmas three for two offer. In the set there are three nail varnishes in the shape of upside down ice cream cones, a Pusheen shaped nail file, two toe separators, a black nail art pen and a sheet of Pusheen stickers (which may have been the main draw for me).

In the past I have bought a few nail art sticker sets and they all seem to have the same flaw of the stickers coming up at the edges quickly, I’m not sure I will ever learn that this happens but these were so cute and I do love Pusheen so I thought I’d give them a go. I know that I am probably twice the age of its intended audience, being 27, but I liked it and thought I’d review it in case any of you guys are interested in it, whether it’s for yourself or someone else. I do think it makes a very nice gift set with everything n there, like an introduction to nail art.

END_OF_DOCUMENT_TOKEN_TO_BE_REPLACED

It feels a bit odd not doing anything Halloween this year, though I honestly ended up kind of forgetting about it in the lead up recently for some reason. I love Halloween decorations and movies and it somehow managed to creep up on me. I’ll probably end up watching movies and playing horror games for the next few weeks instead, November can be creepy right? Here’s a nice cute, fluffy Pusheen Christmas gift set review instead.

With the lead up to Christmas and so many gift sets out there I found a few that I wanted to try for myself and review for you guys. This is a small gift set with three bath fizzers in it from the Pusheen range at Boots and costs £6. It’s in the three for two offer they have on all of their gift sets around this time of year and this was the one I got free. I mainly bought it as I don’t have any bath bombs at the moment and was making a Boots order. I also may have a slight weakness for all things Pusheen and saw this after putting the nail art set in my basket. I’ll be reviewing that one later this week, or maybe next Monday depending on how long the nail varnish itself lasts.

This bath bomb set has a scent described as sweet and fruity so I was intrigued to see what that would be like, and how these bath bombs would work considering it’s a set for £6 and franchise products aren’t always the best quality for these kinds of things.

END_OF_DOCUMENT_TOKEN_TO_BE_REPLACED

I know I did another recent purchases post earlier this week, I would have saved this one until next week but I’m not sure how long the Soap and Glory tin is going to be available and I think it’s a pretty god offer so wanted to show you guys what’s in it. I did go into a Boots store earlier this week and there was a display for the Soap and Glory Sweet Ten-Tation but someone in front of me got the last one as I walked through the door so if you want to get one in store you might want to be quick or just order it online may be easier as you can still pick them up in store. I got all of these things on the Boots website.

I didn’t realise that Boots had done their version of the Beauty Blender, or kind of anyway, and with the price difference I wanted to try it and the Real Techniques sponge as I’ve been recommended it in the past. Also, getting these things I now have enough Boots points to get the original beauty Blender with them anyway so I can compare them in the future some time. I also didn’t know about the Soap and Glory Sexy Mother Pucker lipsticks, there’s a Nudes Collection, a Pinks Collection and a Reds Collection with eight colours in each with three different finishes. I am definitely going to be getting more in the future but I thought I’d go with two from the Nudes Collection to start with as they’re buy one get one half price at the moment.