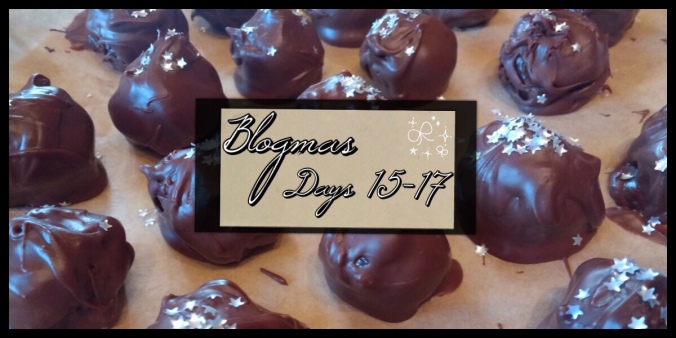 This weekend was more exhausting than I thought and I was still catching up from the weekend before energy wise during the week so I wants as prepared and that means a bumper Blogmas blog post with three days worth of advent goodies in one! It was a great weekend visiting family and it was great catching up and seeing people from the other side of the family than last week but two weekends in a row and all that travelling really drained me. I’ll try to be more organised for the rest of Blogmas.

In the Holland and Barrett beauty advent calendar there were three very different gifts. One is something I’ve been needing to get to replace an old one, another is something that I’m looking forward to trying and the third is probably the first flop for me from this calendar so it’ll be passed on. The Harry Potter Funko Pop advent calendar had two figures in that are characters that already appeared in the advent calendar. I can get why Harry, Ron and Hermione would have duplicate figures but I’d still rather have some extras like Bellatrix or something.

A bumper Blogmas post also means three days of questions to answer! I am going to put today’s in tomorrow, simply because I couldn’t find the card I wanted to photograph today so I’ll have to have a look for it tomorrow, but that still leaves the questions for day 15 and 16 in here.

I think the best gift I’ve given is probably when we’ve found old Rupert Bear books for dad. He’s always had the annuals but for last year we found someone selling the really old individual story books from the 30s I think.

16. The hardest person to buy for?

The hardest person to buy for in some ways is my sister. In some ways it’s fairly easy as I often have ideas what to get, and hopefully they’re good, but her birthday is a few weeks later so it’s more thinking of two gifts different enough that she’ll like. Also anything has to be able to travel as she comes home for Christmas but then goes back home by train. 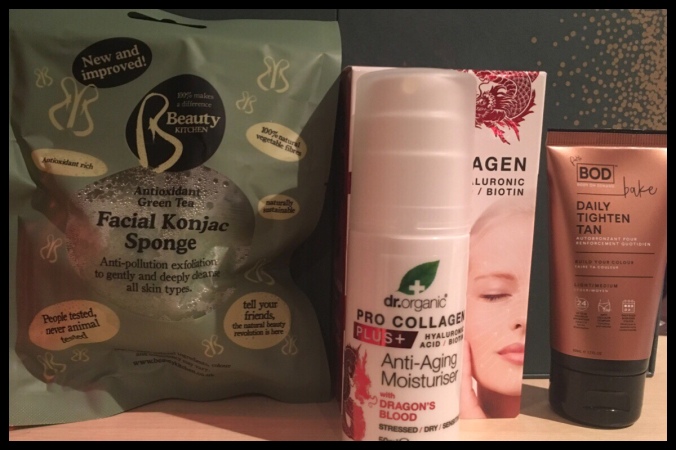 Day 15 in the Holland and Barrett beauty advent calendar had the Beauty Kitchen Konjac sponge. I think this is one where you could get either the green or the black one and this is the Green Tea version, they cost £6.99 each. I’ve used sponges for a while and it was time for a new one but as I knew I was getting one I didn’t buy one, does anyone else use these advent calendars as sort of shopping for replacements? I haven’t tried a green tea sponge before but I’m looking forward to seeing if it works for me.

The next day’s gift was another Dr Organic product in the Pro Collagen Plus with Dragons Blood and is an anti-aging moisturiser. This bottle costs £18.99 on the website, so it’s over half what I paid for the whole calendar and it’s a great way to try this. It has a similar scent to the Moroccan Argan oil products I’ve tried, I think it’s mainly the patchouli, clove and dragon’s blood coming through but there are a few other highly scented ingredients too. I’ve tried it on my hand and it does sink in well and leave my skin feeling nice so I’m looking forward to trying it on my face and seeing how it works for me. As with all Dr Organic products this is cruelty free, and it’s also vegan friendly.

The third product, and the one I’ll be passing on, is the BOD (Body on Demand) Daily Tighten Tan, which is a gradually tanning lotion. I haven’t tried anything from them before but they’re cruelty free and this is vegan. I tried some on my hand and it does smell nice, it’s got a tropical smell, and it does seem to spread easily and evenly. I just don’t use fake tan and the tightening aspect of this isn’t something I really try either. I guess I could give it a go in the summer, maybe it’ll surprise me, but I’ve still got the bronzing products from last year’s calendar in my drawer. At least it’s light/medium so may work for my skin tone. I can’t find it on their website, maybe it’s a summer product, but it seems like this may be worth £4.99 going by other sites.

I have to admit that two of the three of these figures are a bit disappointing. I love the Moaning Myrtle figure from day 15. The detail on her is amazing, especially including the little Hogwarts uniform crest in the ghostly colours. I think she looks great and is probably one of the top three for me so far in this calendar. I think the lack of paint does make it easier for them to make her but it is an effective way of showing the ghost without going the clear or frosted clear plastic look.

The other two, however, I am less happy with. There’s nothing wrong with them exactly, though I do think that they could have added the Hogwarts crest on Ron in his uniform from day 16 considering they did on Myrtle at the same scale. It’s just the duplicating figures when there are so many characters in the Harry Potter universe.

Hermione from day 17 is ok, I like that she has the time turner on, and I guess she could be good for recreating scenes from the third movie in that section of it. The thing is that these more scene specific figures come from all different scenes. We not have Ron, Hermione and Harry all in their year 3 clothes from those scenes in the movie, instead so far we have Hermione from this and Harry from the train scene in the first one. I feel like I’m complaining, and I’m not really, I like the figures and love the fact that Funko released an advent calendar at all. I just wish they’d gone for more variation, even adding more animals like Nagini or Fang, Who they have released in previous versions, would have been good.