My lips seem to get chapped and dry throughout the year, so today’s Holland and Barrett product is definitely welcome, especially as they get worse in the winter. The Funko Pop figures for today adds to the Weasley family. I like how they’ve included Ginny in here as she’s a fairly main character but seems to be sort of forgotten in a lot of Harry Potter licensed products.

I managed to find the original image on Google rather than Pinterest so I could save it and use it, only took me two weeks. Anyway, this is the list I have been getting my Blogmas questions from. The website still isn’t working for me but it’s peanutputterjenny.com and the question for day 9 is:

9. Easiest person to buy for?

I have to say probably both of my parents. At least at the moment as there are certain themes for my dad, mainly certain authors, that I know he likes the work from. However, he does now have all of the Terry Pritchett books so it needs a bit more imagination but it’s still fairly easy within my budget. My mum is also easy to buy from, to be honest a lot of the things are ones I’d like, and it’s more stopping myself from over buying and ending up with too much as I keep seeing things I know she’d like!

Today’s teabag from the Holland and Barrett Organic Herbal Tea advent calendar was Ginger. It’s one of the ones I thought I’d like as I do normally like ginger teas, it was nice and strong and fairly spicy but was probably the closest so far to a fresh version of the flavour. It worked really well with honey in it, it’s a good flavour for the winter as I find it warming. Ginger is also supposed to be good for the digestive system and I do find it helps when I’m feeling nauseous so this might help with that too. I’ve got a spare of this so I’ll wait and see how it works next time. 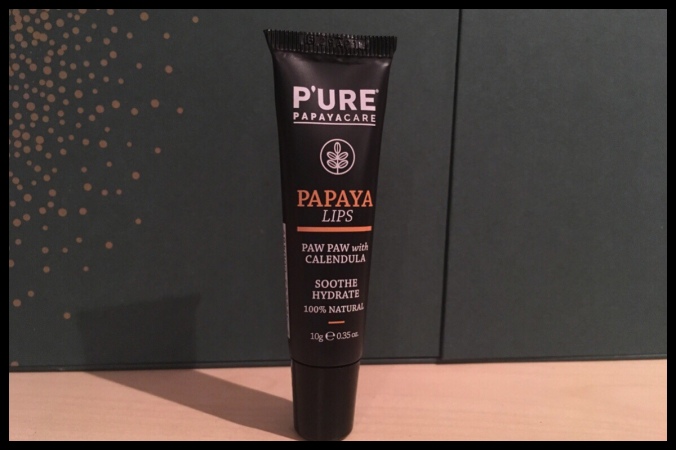 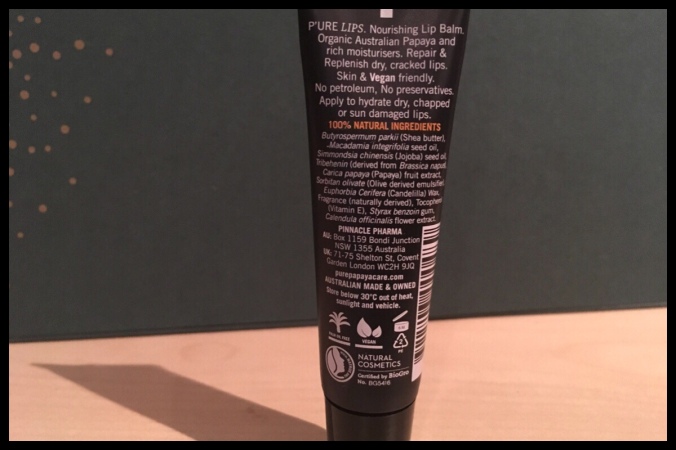 I always like trying new lip balms, not many seem to be moisturising enough for my lips in the winter, so I’m happy to give the P’ure Papaya Lips a try. This is the full sized tube and costs £5.99 so it’s not too expensive and I’ll get more if it works. This is vegan friendly and cruelty free.

I’ve been trying this out today and so far I’m liking it. It’s definitely a very thick balm, it reminds me a lot of coconut oil in that it’s almost solid but seems to sort of melt as it gets warm on your lips. It also smells quite a bit like it too, I don’t smell any papaya or other tropical fruit in it. It spreads evenly and easily and sinks in pretty quickly. It does feel nice and moisturising but I’ll have to try it out more to see. I’ll definitely be giving this one a post to itself in the future though.

Sometimes I feel like Ginny Weasley gets left out behind some of the other female characters in Harry Potter so it’s nice to have her in today’s Funko Pop advent calendar. Although she’s in the books and movies from the first one on and plays a fairly important, though maybe off camera/book, part in the last one it does feel like Luna gets more merchandise based around her as she’s so distinctive.

Ginny’s in the Hogwarts school uniform, minus the robes, and I think it’s her as she was in the Chamber of Secrets, so her first year. I like the look of this figure from a distance but I have to say that the quality isn’t there as much when it comes to the painting, it’s definitely the one with the most inaccurate paint job. Also it’s the least stable of all of the figures. I managed to get it to stand for literally thirty seconds to take some photos and when I tried again she just falls over all the time. At the moment she is stood at the back leaning against the calendar itself. I think to get her to stand up for a display it would need blue tack or some kind of base but I do like the idea of a Weasley family display some time.