It doesn’t feel like December at the moment, it’s too warm for this time of year, so much for the snow we were supposed to be getting from November.

The advent calendars today had some more goodies, I do love trying new nail varnishes, though I should probably reducing my nail varnish collection rather than adding to it. The Funko Pop figure is the first of the Hogwarts pets. Crookshanks is almost as big as the other figures but still a very cute looking angry cat!

Today’s Blogmas question from peanutbutterJenny.com is another that was so hard to answer. It was

6. What is your favourite tree decoration?

It’s the sheep that I bought I. Ireland last year. It’s not particularly Christmassy and totally the tourist gift shop type thing but I love how cute the sheep is and the memories. The photo also has two of my other favourites in the purple dancing Santa, he’s a lot like the first Christmas present mum and dad bought together that’s been on our tree since I was little, and the bright coloured robot set of three I got just because I like them.

The Holland and Barrett Herbal Tea today was Lemongrass and, so far, it’s the first I’ve actually not really liked. I didn’t really taste lemongrass, it tasted like a bitter tea with some kind of green leafy taste. It could be nice and refreshing in the summer and it might actually work as a cold tea better.

I have more than enough nail varnishes already but I’ll never say no to trying a new range. I have tried Nails Inc in the past and find them a bit hit and miss, often the free ones with magazines work the best for me, but I haven’t tried the Green Fingers bio sourced range, I don’t think I’ve even seen it before. These are £11 for the 10ml bottle and this light pink is called Thistle Fade.

This isn’t one of those colours I’d choose, I’m not a fan of light pinks as they tend to make my skin look even paler than it is. As far as consistency goes it seems ok, it takes three coats to get an opaque finish and the first two coats looked quite patchy and uneven as I applied it. I can’t say how well it would last, I’ll give it a proper try and see how quickly it chips. If it’s good and actually does help my nails then I might be tempted by another colour. 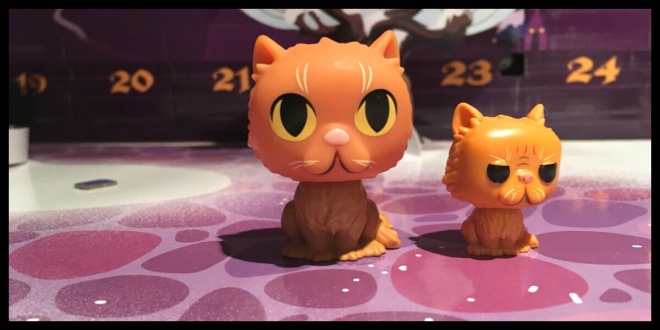 I forgot that there were any of the Harry Potter pets in the advent calendar, so today’s figure was a nice surprise. Crookshanks, Hermione’s cat, isn’t that major as far as characters go but it is nice to have a pet in there. I like the detail, the texture they’ve gone for with the fur does make it look like a cartoon cat and the fluffiness of this particular cat does work well. I love the expression on his face, it’s got the grumpy cat look and the pure black eyes add to the angry look.

Crookshanks is one of the figures I got in the smaller figure blind bags that Funko released so it was interesting to see how it compares to that as well. I think they’ve used the same mould design, just increased it slightly. The head is also made if the same material with this one but not the larger one. I think the angry face on the pocket pop works better and makes him more like the character to me.

Have any of you tried this range from Nails Inc? Are they pretty consistent or are they one of those products where each colour seems to be a different formula like some seem to? There are a few colours I’d be tempted by if I like this one when I try it.