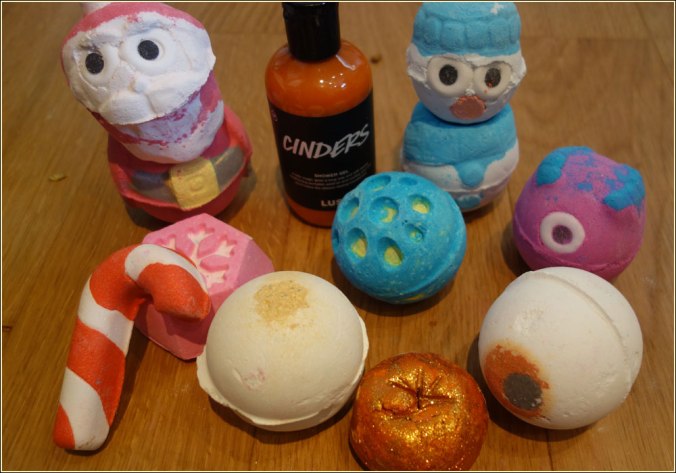 I tend not to buy much Lush any more, ten years ago everything I had was by them, but I always get dragged back in at Halloween and Christmas. This year I’ve not gone over the top, for me anyway, but I do like to try new products that sound nice to me to know if I’m going to try and get them in the sale. I got three of the Halloween products and quiet a few of the new Christmas products so I thought I’d put them all in one post.

This is pretty much a first impressions post, though I have used a couple of them before if they aren’t new this year I can’t say that they’re definitely the same as in past years even if they smell like it.

I’ll start with the Halloween products, and I’ll add the link to my review of the Ectoplasm Jelly Bomb here too as that’s reappeared. Not one I’d go for as I didn’t like the lumpiness of the jelly but if you’re interested you can see more about it there. 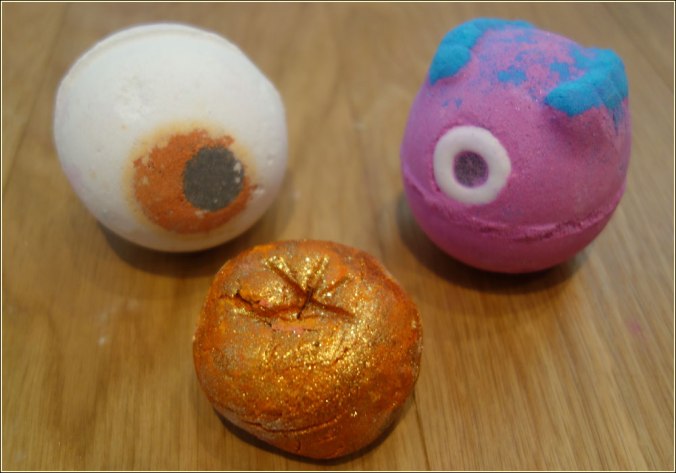 Eyeball bath bomb (£4.95) is new this year and doesn’t have that much scent, it was overpowered by others in the box but having been out for a week or so it’s got a bit of a sweet and slightly herby but citrussy smell, like if you put citrus fruit, snow fairy and dream cream in one. It’s odd and I’m undecided on it, I’ll see if it changes when it hits the water.

Monster Ball bath bomb (£4.95) this has the Calacas/Day of the Dead scent that seems to have become one that comes back every year in some form or another. A nice lime jelly baby type scent to me, sweet but refreshing. I did a review of last years but not much has changed except the eye design and the fact it’s gone up 45p. If you don’t mind missing out on the colour changing this is one that will definitely do two or three baths.

Sparkly Pumpkin bubble bar (£4.75) has the Carrot scent, it’s light and slightly fruity and green and just a nice refreshing scent. Not much to do with Halloween and it seems to come out in some form each Easter too. This one normally does at least two baths too.

And the Christmas products, I’ll try to keep this short for each of them as I don’t want this post to be too long! These are all new to me so these are real first impressions and I have a feeling that some of these may be the kinds of scents that change a bit when you use them. Also, as I did buy it last year I thought I’d include a link to the Snow Fairy Jelly Bomb review I did. This is one of the jelly bombs I might be tempted to get again, mainly for the smell. Also worth knowing if you plan on getting a jelly bomb they don’t keep very well. 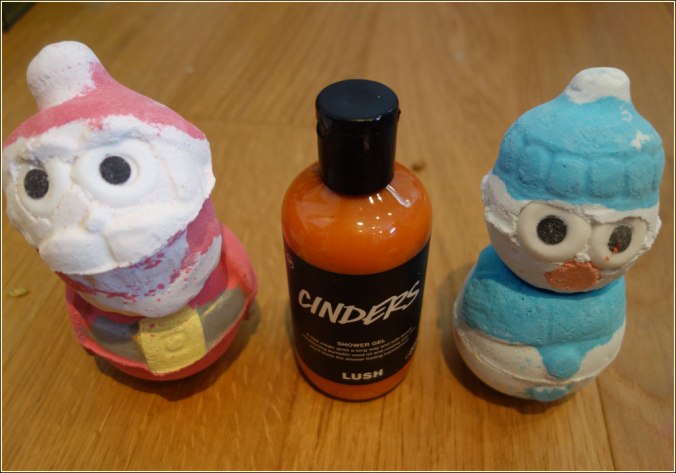 These are definitely the most expensive bath bombs I’ve ever bought but I can see them doing a lot of baths. They are both made of two fairly big bath bombs that sit on top of each other so they’re sold as being a two bath product. At nearly £10 I’ll definitely be smashing these guys up and putting them in a jar. I’ve found that’s the best way to store Lush bath bombs when they’re broken and means you can use as much or as little as you like, some bath bombs I’ve got four baths out of so they actually become good value for money! These will get at least five, I’m hoping anyway.

Snowman Bomb Bomb bath bomb (£9.95) I’m not sure if anyone remembers a bath bomb they did called Abombinaball a few years ago. It was a buttery mint and so nice I stashed a few. This one reminds me of it but pure spearmint, like just opened a packet of polos spearmint, it’s pretty strong and was one of the main scents in my room recently. Nothing subtle about it but it’d be a great wake you up scent.

Cinders shower gel (260g) (£10.95) This is a bit of an odd scent to me, it doesn’t smell of the oranges or spice but all I can really smell is cherry cola for some reason. It’s not overpowering and has the almond in there to make it smell creamier. I’m just hoping it’s not going to go like the shower creams and turn to water after a couple days when I start it as it does have a similar consistency to them.

Holey Night bath bomb (£4.25) I have a feeling this one is a very subtle scent as most of what I can smell I think has come from the other products around it. Other than that I can maybe get a soapy smell to it, like plain hand soap bars, but I really can’t tell with this one. I do love the design though.

Cheery Christmas bath bomb (£3.95) I love this and it really reminds me of an old Lush scent that I can’t put my finger on. It’s got a hint of citrus in there to brighten it but really makes me think of the purple gum drops you get in dolly mixture. That may sound oddly specific but it’s different to other gummy sweets.

Candy Cane reusable bubble bar (£3.95) This is one that surprised me when I read the description, how did they not make the candy cane shaped thing mint of some kind? Anyway, this is another citrus scent with lemon and bergamot and it’s basically a sweet, subtle citrus with a hint of floral to it for me, though at times I mainly get Snow Fairy when I smell it, which is odd as I don’t have any of that nearby to have influenced it. I’m hoping this is a reusable bubble bar that lasts, I’ve had some that do eight or nine baths which are great value for money, others melt and turn to goo in the first try.

Perle de Sel (£4.95) This says it’s supposed have rose in it but all I can smell is pretty much almond like butterball or the butter bear bath bombs. Does anyone remember the Ghost lily scented products they used to bring out at Halloween? There may be a hint of that in there but it’s not a strong scent.

I have to say that, although I’m not complaining as I am a fan of citrus, they do seem to be going all out for citrus scents when it comes to limited editions. Most of the ones I’ve bought, and a few that I haven’t that I’ve tried before, have either lemon, orange or lime in them.

I do like everything I have and there are definitely others I’ll be buying at some point as they’re old favourites I want to get again, but it does feel a bit similar to previous years when I look at the scents. I’m all for bringing back old favourites, I always stock up on Snow Fairy, but when there are ‘new’ products out I’d prefer more of a range of scents. Maybe I’ve just been buying things from Lush for so long that they’ve done so many scent combinations and ended up cycling through old scents again.

I feel like maybe I should add some of the returning Christmas products from the past that I’ve loved but that would make this post way too long. There are definitely a few that will be going on my to buy list before the sales so I don’t miss out on them.

Have any of you tried this year’s Lush range yet? Anything of the new products that you’d recommend? There are a couple of the soaps I was half tempted by but I never really use soaps and half the time theirs seem to dry my skin out even more, though the pear one last year was really moisturising so maybe the ones with cream in are better.