I did originally plan to do an update every three months but my last one was in March so you can see how well that went! I can’t believe how quickly 2018 has gone, so much seems to have happened but in so little time. Having got a notification saying I’ve just had my 4 year anniversary I thought I’d look back at the goals I set way back in January and see how I’m doing.

I tend to see goals as something to aim for, but still keep them flexible. I’ve found that if I’m too rigid with these things it’s easy to get discouraged and give up. Things change, life gets in the way, making realistic goals helps me to stick to them and I love that feeling when you achieve something. It’s like that feeling of crossing off things on a list. I think I just like lists in general.

If you want to see my last post and some of the goals I’d already achieved that I’m not including in this one you can find it here. I have actually added some extras at the end of this one with things that have happened recently.

I should probably include a bit of an update in here as some of the explanations might not make sense without it. I was going to do a separate post but I might be a bit short for that. In the past month I’ve started a certified course in Customer Services and also started work experience as a graphic designer! These do both mean I have less time for blogging, though now I’m a bit more in the swing of things there I have got more of a plan so hopefully it will be less disruptive, you may have to be a bit patient with that though. There’s also been a few health scares for a family member who ended up in hospital twice recently and I’ve been spending more time visiting them which has meant less energy for other things but that’s hopefully sorted itself out too so it’s all looking good going forward.

And now I’ll start with the actual goals update! I’ve just copied the goals I set back in January over to here and will see how I’ve done so they’re exactly the same as January and March.

Get a regular blogging schedule. Well this was going well but kind of fell apart in the past month or so. I do have a plan for this though so hopefully it’ll be back on track, though it may be writing blog posts on the weekends for the week, I’m definitely going to work on this as I want to do the daily blog posts in December for advent. I’m hoping to be back up to three posts every week, if not I’ll do two but on set days while my course and work experience are going on.

Be organised enough that I have my blog posts ready in advance. Another one that fell apart when life got in the way. As I said, hopefully I’ll get better at writing the posts on the weekend.

Get my blogging space sorted. Done! I even have two baskets for things I plan on blogging about so feeling very organised for this.

Get more involved in blogging. I felt like I was doing well with this but, again, life got in the way the past few months. I really want to get back into reading more blogs but I know a lot don’t show up on my feed when I check it so I need to work out a way of checking blogs without having to go to each individual one separately.

Sort out my blog layout. I didn’t really get any further on this than at my last update. I include my social media most of the time but haven’t really changed anything apart from that. However, as I now have the whole adobe creative cloud of programs because of my work experience I plan on having a play around and actually getting a proper header and post ending designed.

Start the diet properly and stick with it. I’m pretty much sticking to the diet. There are the odd days where I’m not, things like birthdays or people visiting I’m letting myself go a bit off it, but I’ve been going back to trying proper recipes and different foods again and I can tell a difference so this is going well. 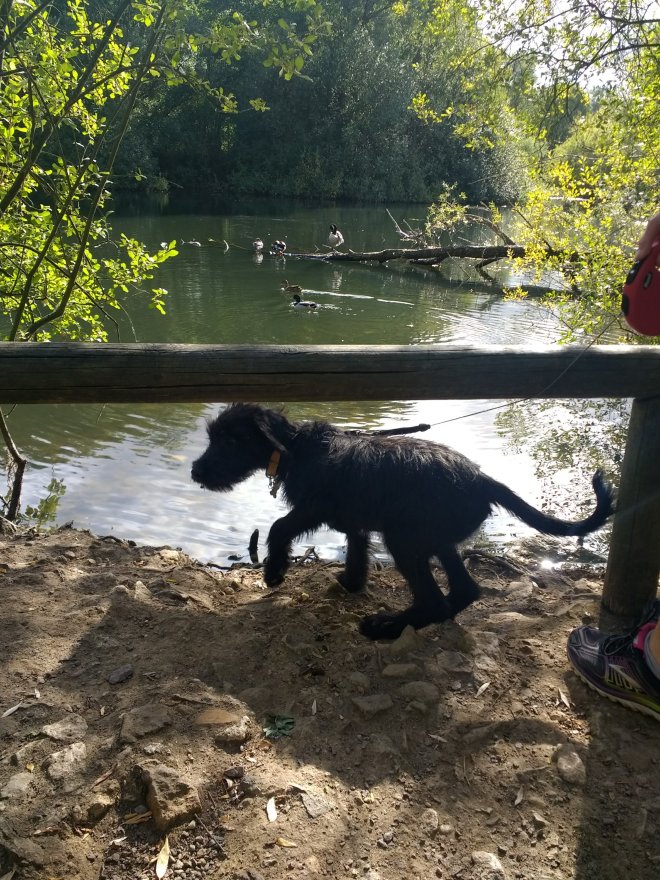 Go for a walk and do my exercises five times a week. I have to say that having a puppy has helped with this. I go for walks six days out of seven, the one day is puppy training so I don’t always go for the walk before that, and can tell I’m walking further than before. Also doing my exercises every day. I won’t say that I’m doing this 100% of the time, but the only times I’ve missed have been when I’m ill and can’t manage to do them which I think is fair enough.

Get organised! As far as using a planner goes, it’s been a failure, but my room is so much better organised. I have more space for things and my life in general is better organised so I’m going to count that as a win.

Read more. This was going so well in the summer, I was reading a new book every few days. But you can see when I stopped, I’m half way through two books I started in August! I will try to read more, maybe next year a goal will be a book a week but this year I’ll say I want to finish these two. 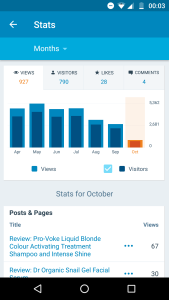 Get 450 views a day by the end of the year. Ok this one didn’t seem too big of a goal, I was fairly often almost hitting 400 so an extra 50 when they’ve increased by 100 or 150 a day the previous two years didn’t seem too greedy. I feel like I should leave that explanation in but say that I think a goal of 100 views a day now seems more doable. Since paying for a WordPress domain thing my posts have gone down in search engine results and my posts aren’t even getting 100 views a day let alone the 400 I almost got regularly last year. So disappointing and discouraging to know that spending the money seems to have actually made my numbers go down. Did anyone else find that?

Make a Facebook page. Done! And get 50 followers by the end of the year. Maybe I’ll change that to get 10.

Do a collaboration post with a brand or blogger. Not happened, and with my numbers probably won’t happen, but maybe next year.

Make some sort of record of my makeup collection. I have in a way, with each declutter I’m changing the numbers but I haven’t made a record of which palettes I have and things like that. I think when I’ve finished going through them all completely I’ll start on that. Something to aim for next year.

Declutter so my makeup fits into the boxes I have for them. Done! With the exception of the eyeshadow palettes which will never get into the box I originally chose eight years ago, everything else fits into its box with room to spare! My decluttering strategy really seems to be working.

I guess now it’s time to do the extras that I’ve come up with, there’s only a few so it’s not going to be a lot more to add on to what I’m doing already.

Get Norbert out more. This may seem an odd one to put as a goal but I’ve found that, since having Stormy the puppy, my blue tongue skink hasn’t been able to explore as much. I’m going to try and get him more used to coming out of the vivarium. He’s the kind of lizard who, once he’s out he’ll happily wander around, explore or just snuggle and nap on me, but it’s getting him out as he gets nervous. Basically trying to get him to climb onto me rather than me going to get him.

Have three design projects done for my portfolio. This one may be a bit ambitious and it does all depend on what projects come along for my work experience but I really want to get some proper experience and have something to show for it at that end. I’ve just started on my first project but I’ll try and see if I involved in others after.

Complete the customer service course. This one seems like it should be easy enough to do, the deadlines are two weeks apart and that’s more than enough time to complete the sections, but life can get in the way and with my health it’s been known to suddenly crash and missing a deadline isn’t good so it’s going in the goals.

As I said, not many to add and hopefully they’re doable, but I wanted to add some as I know that at least two of my old goals aren’t going to be reached. I guess that’s the thing about blogging, it can be unpredictable. I felt like 450 views a day was achievable in January, now I’m aiming for less than a quarter of it.

Did you guys set yourself goals at the beginning of the year, or any time? Have you achieved them or have you had to modify them as you go along? I find it interesting to see what goals people set themselves so hopefully you’ve enjoyed reading mine, even if some of them aren’t going so well!

One thought on “Another 2018 Goals Update”