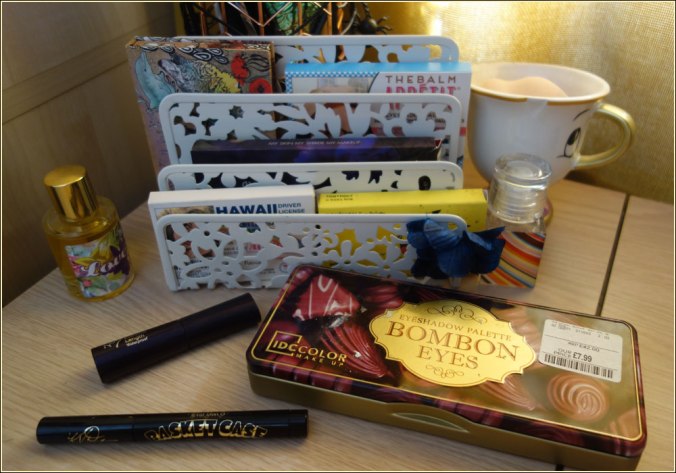 For the past few months I’ve been going through my collection, picking out a set amount of products and only using those for the month. I guess it’s kind of a way to find out if the products I’ve kept for ages are ones I really like or just don’t like the idea of letting go and keep them ‘just in case’ when that day never comes. So far it has also helped me to declutter because I’m actually using the products so I see how they work rather than just looking at the pretty colours or swatching them once and deciding to keep them.

This month I think everything I tried was old, I didn’t get any new products and everything I’ve had in my to use area has either been sat in my drawer waiting to be used, been loved at one point and forgotten, or something I was pretty sure I’d be keeping but wanted to use anyway.

I’ll start with the non eyeshadow products because, apart from my staples which I’m not actually including in these posts, there were only really the two that I was really focussing on. I didn’t pick any extra lip products besides the three I tend to use regularly anyway and my base products are ones I know and love and I tend not to experiment with them too often.

I have so many of these luxury sample sizes for mascara and so I’m going through them and giving them a proper try. This No7 Extreme Length Waterproof Mascara in black is one I’ve had open for longer than I should probably have been using it so it’s going in the bin after this but I did like it. It’s one of those that’s gone on my list to repurchase and get a full sized one if I need to buy one as it’s just a formula I like.

The Kat Von D Billie Joe Armstrong collab Basket Case Anti-Precision Liner is one of those products I saw and had to try. I do love it but there’s the whole Kat Von D thing going on at the moment and I’ve sort of stopped using her products recently but wanted to give them another go. There are others that will be popping up in future posts like this too. I did a proper haul to try a range of products not long before the whole controversy started and I’m not throwing them out, I paid the money, but I’d have to think very carefully about whether I’d buy more, and to be honest I probably wouldn’t. Anyway, no review for this on my blog at the moment but I do love it as it stays really well, blends out amazingly and I’ve found it works great putting some on the back of my hand then using a thin brush to apply it as a smoky liner. 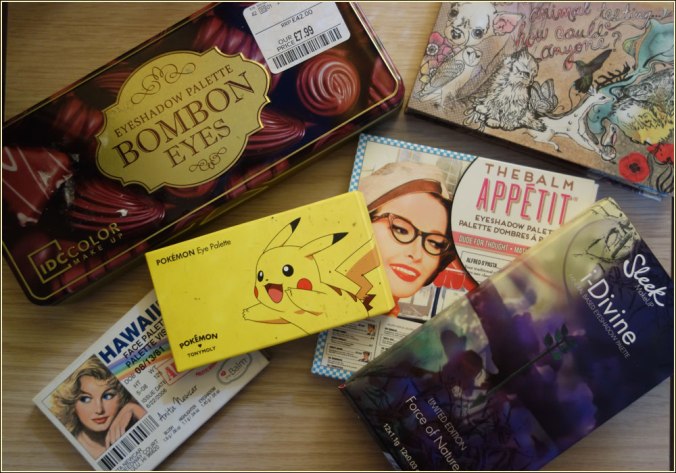 I think the area I’m working on most is the eyeshadow palettes, eyeshadows do make up more than half of the makeup I own when I add them up as individual products, but they’re also the things I use the most and play around with the most, so it makes sense to have more of them each month than anything else. Also they fit well into the little organiser I have out on my desk and that’s always a bonus. I try to have six out each month and only use these, whether it’s travel or everyday looks. 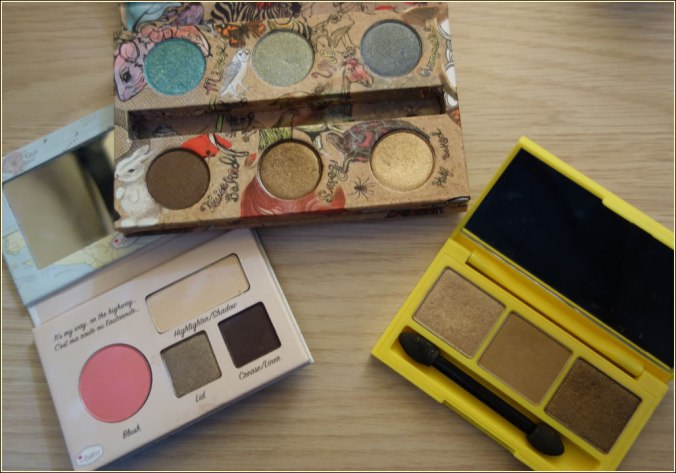 The two mini palettes I chose are the Hawaii Autobalm palette from theBalm and the Pikachu Pokemon Tony Moly eye trio. The Autobalm palette is a full face mini palette and these are great for travel. I wanted to see if this worked as well as I remember and I did find it was a great one for travel and I used the dark brown and matte highlight shades a lot alongside other palettes. The Pikachu palette has three great colours that work well for one eye look but there’s not a great amount of variation there so it benefits from another palette with it. I do love both of these so they’re both staying.

The Urban Decay Vegan palette is one that’s been out for years, I want to say it was released 2010 going by Google, and I really thought this would be one I’d be depotting or throwing out but I ended up loving it. I only really used the one row in here, the brown one, as the top definitely has two of their old glitter formula that isn’t my favourite, but I love the packaging so much and they are still nice colours if you’re careful with them so I’ve kept it all.

Do you guys have those palettes that you think you remember the colours in there and they’re not ones you’d reach for but when you look inside there’s actually some great wearable shades in there too? That’s the Sleek Force of Nature palette for me. I remember the amazing matte formulas and the brighter colours but seem to always forget that top row with the neutral mattes that are super pigmented and blendable. This is definitely one of those hidden gems that I’ll have to remember when I’ve finished going through everything.

The Eat Your Heart Out palette from theBalm is one that I always remember as being better than it is. Some of the colours are amazing and I love it, I’d actually recommend it as a great all round eye palette for travel, but I did find myself using this less than I expected. I love the range of colours in it but they weren’t the ones I went for in my everyday looks. When I took it for travelling I actually used it over the two smaller ones so I’m keeping it but it’ll probably mainly be a travel palette as I can get away with just taking this for a range of looks.

The final palette is one I actually reviewed recently, the IDC Color BomBon Eyeshadow palette. It’s pretty much an exact dupe of the Too Faced Chocolate Bar palette but on a budget. It’s a decent enough palette but only a few of the colours stood out to me. I did plan on depotting it but that didn’t go so well! I managed to sort of salvage three of the colours I got out, the large pale one is surprisingly ok despite missing half of it, so they’ll be going into my magnetic palette when I buy some magnets, but it was a bit disappointing that it turned out to be such a mess. On the plus side I did declutter a palette I guess.

This wasn’t one of those months where I necessarily thought I’d be getting rid of things as much as I did in past months but I did end up with less than I started and I’m more aware of what I have going forward. I’ve got this month’s set up and I’ve already rediscovered a couple of old favourites, but I do have an order with quite a few lip products on the way so I have a feeling it’ll be a month of trying new lipsticks.