Or maybe a better title would be ‘Why I Shouldn’t Keep Things Too Long.’ I’ve had a look through my collection and realised that some I used to love have gone beyond when they should be used, others are simply products I never really got on with but kept ‘just in case’ or free gift with purchases that I already had better versions of but kept anyway.

I’ve been working through my stash and using some of the ones that have fallen through the cracks or ones I haven’t used recently to decide which I’ll keep and which I’ll get rid of. At the end of the month there probably will be more joining these decluttered products but I wanted to do this as a separate post as otherwise that end of the month one will be way too long, plus these are ones I just don’t think I want to even try for the whole month before I get rid of them.

I am definitely guilty of keeping things too long because I think I’ll get some use out of them and used to buy colours I thought I’d like but found out that they really weren’t me. I’m getting better at that but some are just too pretty to pass up. I’ve also got better at not being everything in the collection just to have it, that’s where some of the Sleek lipsticks that aren’t colours I’d normally choose come from. If I have done a full review of any of these I will link to it and there may be some mini reviews but I’ll mainly just say why I’m getting rid of them to keep this post shorter.

All of the Sleek Lip VIP semi-matte lipsticks are going as the formula has changed over time. I used a couple, the nude shade is half empty, but they’re almost oilier now compared to the one I got for Christmas so this is another case of keeping them too long. To be honest Big Shot and Fancy Pants from the Fairground themed collection were never me, but I did love Private Booth and Reserved when they still worked for me. I do have another one somewhere which I can’t find, I’ll see what it’s like before I say I’m definitely getting rid of it but that’ll probably go too. 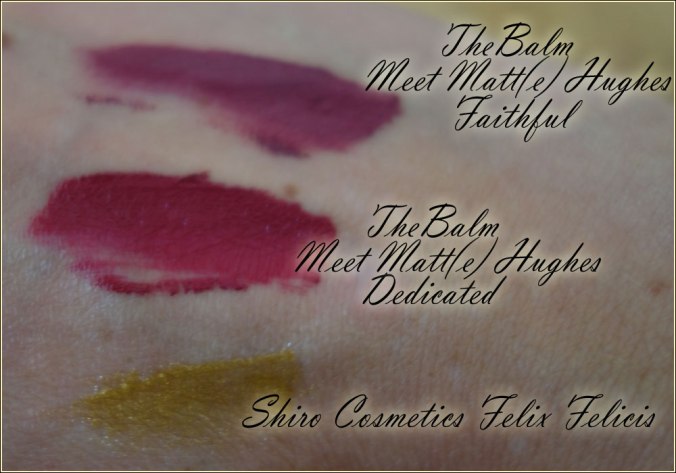 Shiro Cosmetics Felix Felicis is a gorgeous colour but it’s never been used. This may end up as a display piece for my nerd shelf because it’s so pretty.

I do love TheBalm Meet Matt(e) Hughes liquid lipsticks but I have so many reds and pinks that I will never use and these were so similar to others I’ve kept, I guess that’s the problem with buying two mini sets, so Faithful and Dedicated went to someone who would like and use them more.

I seem to have a bit of a love or hate it relationship with NYX lip products. I love the lip lingerie but their other formulas I just can’t seem to get on with. I found that the Liquid Suede, in both Tea and Cookies and Orange County, just wouldn’t set for me and transferred onto everything. Also Orange County is just one of those colours I’d never wear. The NYX Cosmic Metals in Speed of Light had a similar problem, I just can’t get on with it and I should probably know by now that metallic colours aren’t very me, with a few exceptions.

This is the same reason for getting rid of Lush’s lipstick in Perspective. It’s a nice colour but it’s way beyond it’s use by date and smells off, plus I just never use it. On the plus side these black tubes do count in their return five get a free face mask so this will be cleaned out and taken back to a store. 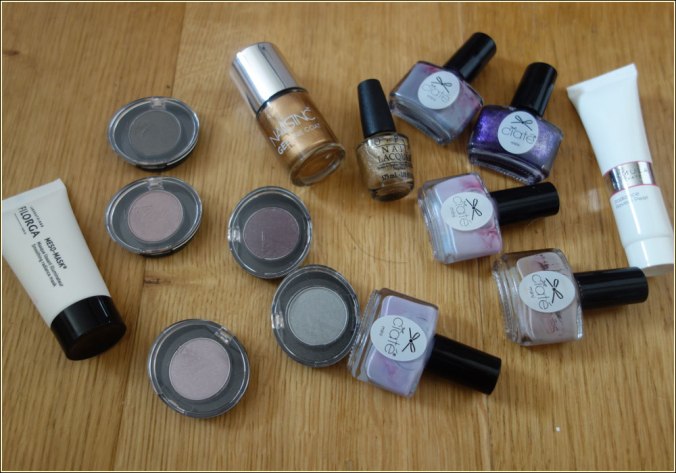 The No7 single eyeshadows come from a set I bought in a sale and never used them, they’re decent but I have better purples and I hardly use them either.

I think it’s the same with the mini Ciate nail varnishes. These are a mix of ones from last year’s Mini Mani Month and one from three or four years ago and I have been downsizing my regular nail varnish collection (it’s finally into one box and smaller than it’s been for years) so these ones I never use had to go. The shades I’ve got rid of are: Ibiza Blues, Iced Frappe (the old formula), Sugar Plum, Pillow Fight, Chain Reaction and Risky Business. The Nails Inc Molten Star one was another that I already have so many similar colours in formulas I prefer and the same goes for the mini OPI gold (not sure on the name).

Unfortunately the Filorga Meso-Mask and Marks and Spencer’s Formula Innovate Radiance Reveal Peal both made my skin react so they’ve gone too. Though I think mum’s already used both and loved them so it’s just my skin not cooperating rather than an issue with the products themselves.

The MUA Mosaic Blush in English Rose is one of those products I will be sorry to let go of. When they discontinued it I bought an extra which has been kept ‘for special occassions’ and now it smells of crayons and has a pink shimmer rather than the subtle blush it was. I wish MUA would come out with something that actually works like this but it’s time to say goodbye.

The Beauty People eyeliners are some of my favourite eyeliners ever. I got a limited edition set with Snow White on the front (which is still available at least two years later so not so limited) and they’re so soft and creamy. they’re just getting too old and this black and brown have dried up so much they’re no use even after sharpening.

This final product is one I wanted to love. I bought the Lush coppery shade eyeshadow triangle, which I don’t know the name of, when they were new and I never got on with it. I’m not sure how long it had been sat in their storage but it always felt dry and didn’t glide on smooth no matter what I did. I even resorted to snapping some off and heating it so it was slightly warm (not hot, don’t worry, and I would say do not do this yourselves) but it just didn’t work.

I love these colours so much. I wish the formula had survived better, or I’d just used them more

I did try to keep this post short, and I think I kind of succeeded, but I didn’t just want to list everything I got rid of and leave it at that. I’m definitely going to get rid of a couple more things at the end of the month but I’m giving everything a proper try out. This was just things that I don’t think I want to use on my face too much! I will miss a couple of them, even if I never use them, but it’s a bit pointless them sitting in the back of a drawer unused and just getting worse and worse. Plus I always think I’ve got something like them when I don’t really.

I feel like I should probably do the traditional declutter disclaimer and say that this is not me showing off what I have. I’m doing it because I actually find that reading these things when other people post them makes me want to do some sorting. Plus I like to see what products people actually liked enough to use and why people get rid of them. I hope someone has enjoyed this post anyway.

Do you guys find you tend to keep things way beyond when you should? I’m going to make sure I keep more of an eye on this in the future but I think the fact I now know what works for me more and what I’ll use means I don’t get things that are pretty but not me and keep them just in case while in fact they’re just sitting there getting older and unusable.

4 thoughts on “A Bit of a Declutter”