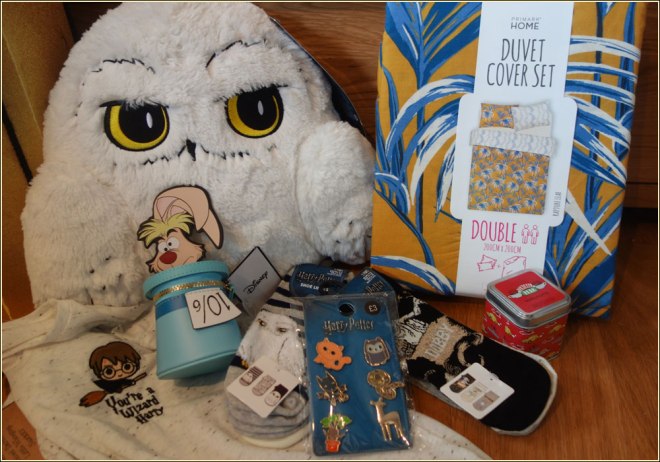 Having spent more time than I probably should watching YouTube videos on the Primark goodies available and checking out their Instagram I went on a trip to a local Primark. I hadn’t been to the Peterborough one before and was hoping they’d have a larger home section than the one I normally go to, which it did slightly but still not the best. I think I may have missed most of the sale items but there were some of the new Friends, Harry Potter and Disney bits there.

There were definitely a lot of the latest clothes ranges around but I was good and tried to avoid most of them, I love the mustard and all the fluffy things around this year so I have a feeling there will be an Autumn/Winter Primark clothes haul coming up soon. I didn’t get everything I planned but probably half of my list was crossed off and there’s a mix of Disney, Harry Potter and Friends. I do love all the officially licensed products they’ve been coming out with, especially all the home ranges. 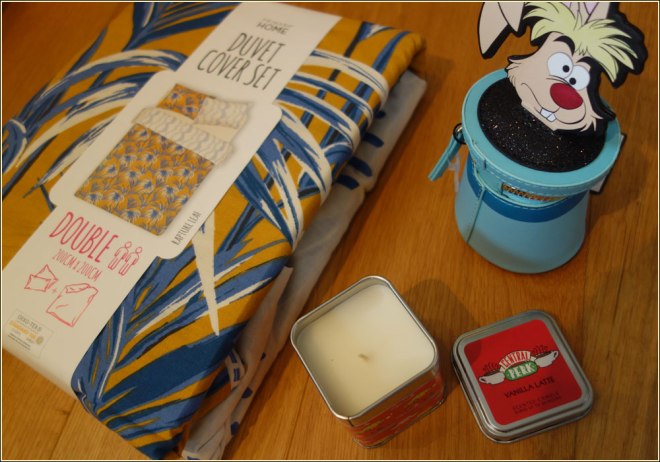 I think I’ll start with the non Harry Potter goodies as there’s definitely more Harry Potter than anything else. I’ve seen the Alice in Wonderland purses before and wanted them but didn’t think I’d use them. However, recently I’ve been sorting out my enamel pin collection and realised I needed something smaller than the old Lush Christmas tin I was using to keep them in so I got this Mad Hatter March Hare purse. It was on sale too, I think all of the Alice in Wonderland purses were though they mainly had these and the white rabbit ones, and was £2 rather then the original £5. I love how it actually sits up on the base and it feels like it’s quite well made. Not sure how well it would last with regular use as a purse because I can see the Hare head getting a bit tatty but for this it works really well.

After redecorating my room earlier this year in an off white and blue with mustardy yellow curtains I have been on the lookout for a nice blue and yellow duvet. This tropical themed double duvet cover set is pretty much a perfect match and I love the leaf print. It’s also only £11 so cheaper than a lot and so if I decide I want something less bright in a couple of years time I don’t feel too bad changing it. I have had a Primark duvet set before and it lasted years, they may be cheap but going by past experience they do last well. 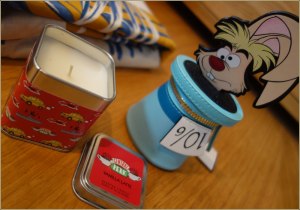 Having seen the Friends range I had to get some of the things in it. The only thing they had from my list was this Vanilla Latte scented candle in the patterned tin. They did have the New York Cheesecake one too but I wasn’t such a fan of the tin and, to be honest, that’s the main reason I wanted them. The candle is very sweet and fans of sweet, buttery bakery type scents might like it. At £2.50 it’s a nice present for a Friends fan and, although it feels early to be talking about it, would make a great stocking filler for Christmas.

This Hedwig cushion I had to get as soon as I saw it. I was good and didn’t get the hot water bottle cover too, though it was close. This was £8 so more expensive than the plainer cushions but it is so soft and fluffy and I love her face on this.

She does look slightly angry, or annoyed, and the whole Hedwig range they have out now is so cute. I have a feeling I’ll be getting the mug if it’s in my local store next time I go in.

The Harry Potter T-shirt is fairly plain but has the cartoon style Harry on his broom with ‘You’re a wizard Harry’ underneath in the Harry Potter font. I love t-shirts with this material, it’s sort of speckled (I want to say marl but not sure) and it’s a small embroidered design on the top left of the front so it’s not too in your face if you want to go for a more subtle Harry Potter top. Size wise I’d say it’s a good standard 12. In the past I’ve sized down on some of their t-shirts where they have the rolled sleeves but I think this one you’d stay with whatever your normal size is. 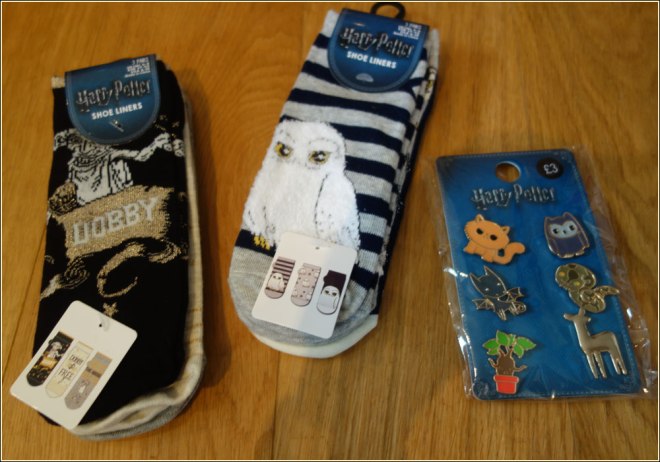 I think they should have quite a few different styles of enamel pin sets but this was the only one I could find in the whole store and it’s the Harry Potter creatures pin set. I love that they’ve included the Mandrake Root and the Thestrals as well as the more recognisable Crookshanks, Nagini and Snape’s patronus. I think the owl is supposed to be Pigwidgen but it looks like a generic owl and I kind of like the idea it’s Errol, the old and not that reliable owl the Weasley’s owned in the earlier books. These pins are nice but you can tell they don’t have the quality of some other makes as a couple have slightly bent pins at the back and the butterfly backs aren’t that even. However, for £3 they’re a great price when you get 6 pins and they’re cute designs. I also like how these can, again, be a more subtle way of showing you’re a Harry Potter fan as having a cute cat or snake pin doesn’t stand out as overly Harry Potter. I’m definitely on the lookout for other sets, I like the look of the Friends set and may be tempted by the Slytherin one. 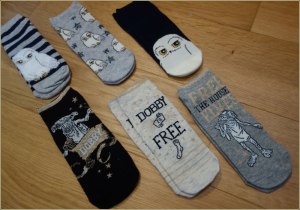 There were so many socks there, I almost bought four or five packs and will probably get more next time I go, including a printed photo of Michael Gambon as Dumbledore at the start of year feast which I kind of wish I’d bought now. I went for two packs of the ‘shoe liners’ that I would always have called trainer socks. Anyone else call them trainer socks in the UK? The Hedwig Shoe Liner set have some really nice designs and I love Dobby but, after looking more closely at them, he does look slightly odd in the Dobby Shoe Liner set! These are really comfy socks and a nice fit. I’ve tended to find that if you get the packs with more than three in them they may seem great value but they always get too tight at the tops of them and dig in. The three packs or less are more expensive per pair of socks but a lot more comfortable. Plus these are so cute.

I don’t think I did too badly, it all came to £40 and I got a big bag of goodies. I may not have got everything that I wanted but I’ll probably do a trip to my local soon and they may have some of the new things in. Considering they still had the Chip mugs months after they disappeared everywhere else and they seemed to dump them there on sale I’m not holding my breath. Clothes wise they’re good but the Home section is definitely not the best!

Have you guys got any of the new Primark stuff? I’m on the lookout for the Friends photo frame and hoping to find one in store so I’m not going to end up looking on eBay. I only realised the other day it’s been 14 years since Friends was on, that makes me feel old. And I’m now going to have the theme song stuck in my head for the rest of tonight.