Despite having grown up watching the Inspector Morse TV series with John Thaw and Kevin Whately I realised I’ve never actually read any of the books. As it’s actually hot enough in the UK to feel like a proper summer it tends to mean I end up reading more and nine times out of ten it’s a detective novel so it felt like a good time to see how the books compare. My parents ave the complete set so I decided to start at the beginning and so read The Last Bus to Woodstock, which was first published in 1975.

I’m not sure how popular the Inspector Morse series is outside of the UK, or even in the UK, any more as there hasn’t been a new episode in over 15 years and it’s pretty much only shown on the digital ITV channels as repeats, though it is available on the ITV player if you live in the UK and want to watch some. If you haven’t heard of it, it’s a detective series based on these books by Colin Dexter. It’s based in Oxford and the main characters, Morse and sergeant Lewis, tend to end up with the more unusual murders. The kind that need some different ideas and only really make sense when explained at the end. They’re fairly quiet, as far as murder mysteries can be, and there’s lots of visits to pubs and conversations rather than fast paced action sequences and violence.

As this is part of the full box set by Pan Publishing I’m not sure if these covers are sold individually too, but I do like the style of them. It’s sort of like they’ve taken a photo of somewhere in Oxford or something to do with the case and played around with the contrast, saturation and colours to make it more stylised. The white on black text also stands out and the small blurb on the back is a nice summary of the original crime without going into too many details. I like that it looks so simple and, with the whole set having the same style, it stands out as being a part of the set as it is an unusual look.

One thing I like about how the book is written is how the chapters are laid out. This may sounds weird, but each of them in this novel starts with the date of what’s going to happen in the chapter. As it does sometimes have what happens to different characters at the same time in chapters one after each other, especially later in the book, it does help to keep the timeline in order and you can just flick back to the previous chapter’s start page to see if it was the same date.

Despite the fact that there really isn’t much when it comes to action in this book it doesn’t actually move too slowly. Everything in it seems to have a point, parts where the story could have slowed down include the thoughts of the characters and little bits of humour here and there that make them seem more human. Some of the things that seem irrelevant, new characters that get randomly introduced or someone doing something that seems irrelevant to the case, do actually tie together at the end and you get more of a background of what’s happening rather than focussing just on the police and how they’re trying to solve the crime.

The murder itself isn’t that strange, when it comes to murder mysteries there’s no locked room or impossible escape route, but it’s the way they work it out that makes it different. Or at least it feels different. As this is the first book in the series it does introduce you to both the characters and their different methods. However, it doesn’t feel too forced, they haven’t worked together before so it feels natural to find out how they do things and their observations on each other which tell the reader what’s going on. You’re not jumping into a well established team where you end up with one who has to act as the reader and ask the questions all the time. They’re both smart and just use different methods, the standard one fills in where the other lacks sort of police duo.

There are some conversations that made me feel slightly odd, mainly around the subject of rape, but they may be things that people would say when talking amongst friends. It’s a topic that does come up in the book though so worth knowing if it’s something that you don’t like reading. It’s nothing graphic about a rape but the topic is discussed a lot. There are, however, some parts talking about sex as well as descriptions of the body that are more in depth and graphic than something like an Agatha Christie book. It’s not one I’d say for younger readers but later teens on may be ok, it depends on the individual really. 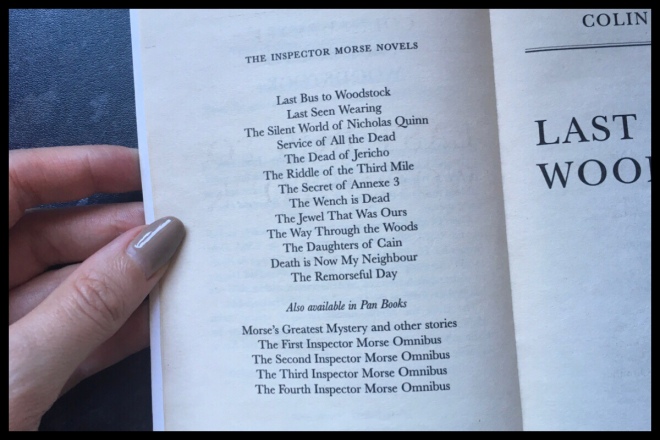 As the book was written in the 1970s there are things that really date it, mainly technology and the lack of any reference to DNA when it comes to evidence found on the body. These things don’t stand out too much to me, maybe because a lot of the things, like a lack of mobiles phones or not much on computers, were normal when I was growing up so it doesn’t feel alien. However, for younger readers it may seem outdated. I don’t think it really has any effect on how enjoyable to story is, after all people read Agatha Christie and Sherlock Holmes and neither are modern. I think a good detective story should rely on the characters and the links that the police find and how the whole thing somehow manages to get pulled together in a way that makes sense and doesn’t feel rushed. I think that this book does that well.

Having seen the TV series first I find it hard not to imagine the Lewis and Morse I know from that when reading this. They did make all of the books into episodes so this one is one you may have seen before if you’ve watched the show but it didn’t stand out as something I recognised. This particular one is from the second series of the TV show so maybe I haven’t seen them recently but if you have you may find yourself reading it and knowing the ending. If you’re a fan of the show, as long as knowing what will happen doesn’t bother you, I think this one stands up well. I can see the same characters, which is a good thing to me as sometimes the TV series can be so different from the books they’re based on and it’s best to stick with one or the other.

Overall I’m definitely happy with this book, I’ve actually started to read the second. I won’t say it’s a long read, at just over 300 pages it took me a few days to read, but it kept me wanting to read just a bit more and find out the next clue which I think is always a good thing when it comes to books.

If you’re a fan of the TV show it’s worth reading and if you’re a fan of detective novels like Sherlock Holmes where it’s more about brains and unconventional ideas to solve crimes then I think you’d enjoy this book too. I can’t comment on the rest of the series, I haven’t read them yet, but I’m looking forward to seeing if the others are as good as this one and it’s a great introduction to the characters.