Fans of Terry Pratchett’s Discworld series will probably know that Paul Kidby was the illustrator for the covers of the later Discworld books. Since 2002 he’s been the artist who’s done the covers and art in various books related to the series. The Terry Pratchett’s Discworld Colouring Book is full of line art versions of some of his art. In total there are 77 pages to colour in, 78 if you include the title page and 16 pages of the original full colour art for the line art versions in the book.

This colouring book has images from various stories, along with excerpts from the books themselves on a lot of the pages next to the full page images and surrounded by their own art too so you have the link to the Terry Pratchett works there too. It’s been around for a couple of years, it was first published in 2016, but somehow I’ve missed it. I think it came out just after I’d bought a few too many colouring books and was taking a break but it’s in my collection now.

I bought this from the Discworld Emporium, though I’ve seen it on Amazon since, and it cost £9.99. I don’t know if there’s any difference for those who originally created the book where you get it from but I like the extra Discworld touches from them so would recommend them anyway, you can see what I mean in my haul post, they’re very fast at delivery too. They also have an artists version where you can pull out the artwork to display it and these normally have thicker paper, I’m not sure if that’s the case here but it would definitely be easier if you plan on displaying the pictures when you’d coloured them. It’s worth knowing that it does cost £5 more though so it’s up to you which style you prefer. 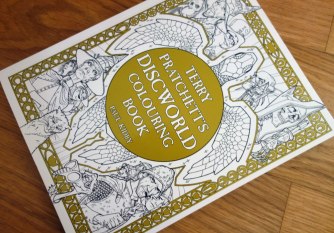 I really like it when these colouring books go with the black and white covers and then have an accent colour of some kind. This one has a matte finish on the majority of the page but the gold lines are all a shiny finish which makes it stand out even more. I like how the art is also taken from various pages in the book itself so you can colour all of these images inside, as well as a copy of the cover as one of the first colouring pages. On the back the decoration on either side of the blurb is also shiny, it reminds me of a coat of arms, and I like the blurb itself, it says more than the standard ‘here’s some pictures from this franchise’ style description. 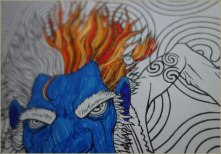 Inside the paper is nice and thick, or thick enough that you don’t see through the page when you colour even with fine liners. I will say this isn’t the best book for fine liners, simply because of the amount of large spaces to colour, but I made sure I went over myself a few times on the one page and you can’t see anything through. I think this is one of those books where I’ll be using a mix of pens and pencils for the colouring as some are more detailed and the pens will work well for them but there are others that have large spaces to fill and adding the shading you can with pencil suits them better to me.

I do like the addition of the text on the side of all of the single page images, there are some double page images too but most take up one. Some of these the text itself can be coloured but they all have some kind of pattern or image around them that means it’s not just empty space around a quote. 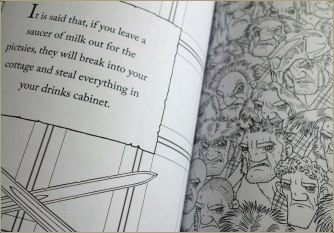 The colour art work at the back is a nice touch too. You can choose to use these as inspiration for each of the pictures to colour or ignore them and use them just to look at. I’d be half tempted to cut a couple out and frame them as art themselves. If you chose to do this with some you could always buy a second book and for the £10 you’d get up to 8 pieces of art and still have an extra book that was complete. Not sure if anyone would do that but as some of the art is exclusive (or was at the time it was printed) it may be the only way to have the art on your wall if you really wanted it. It is printed in nice enough quality that it would look good up too.

I think if you’re a fan of Terry Pratchett’s work, or know someone who is, this could be a nice gift for them or yourself. It’s a different way to experience the Discworld characters and there are a lot of old favourites in there along with some of the more modern characters. I think my personal favourites are Otto Chreik, the City Watch and any of them with the dragons in when it comes to a colouring in perspective and I’m not sure why, they just stand out to me. These images in the book aren’t the style of adult colouring book where it’s a picture made of intricate patterns and images that fit together to make a shape, it’s more like a detailed grown up version of a standard colouring book so there are big blocks of spaces to fill in a lot of the pictures.

If you like colouring books and the Discworld this is definitely worth picking up. If you’re just a fan of the art and like the original coloured art included in this then it still may be worth checking out, especially if you can find it on sale.

Hope you liked my post, you can find me on social media: