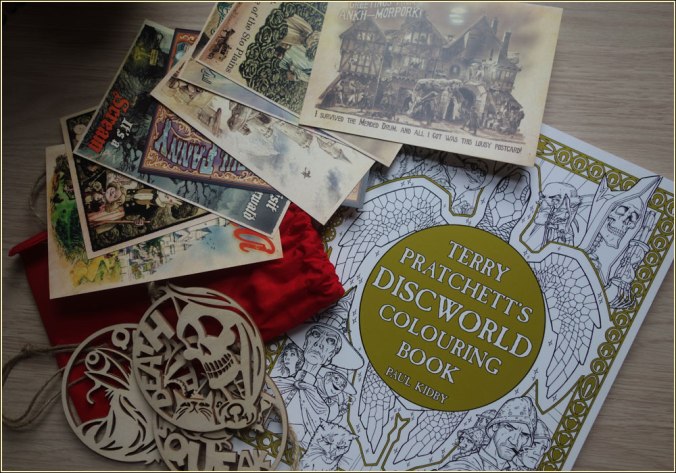 This is only a small haul but I love the things I got so much I think it deserves a post. For a long time I’ve been a fan of Terry Pratchett’s books, I think I read the first one when I was ten or eleven and since then I’ve reread them and the whole Discworld universe is one I love. If you don’t know the Discworld then this haul may seem slightly odd but hopefully you’ll enjoy it.

I was originally only getting something as a birthday present for someone, who I hope isn’t reading this but I’m not going to mention that thing just in case. When I was on the Discworld Emporium website I had a bit of a look around and found some things I wanted to get for myself, I was actually quite good as I could have spent a lot more with all the figures and things they do. I only got three things but I will be buying more from them in the future.

This is slightly off topic, for the haul anyway, but I love the website itself. It’s so easy to use and I like the descriptions they’ve done, definitely fits with the Discworld and Terry Pratchett’s writing style. They have such a range of products there, the standard tea towels and figures as well as an introduction to the city watch or info on buying a house in Ankh-Morpork, the city where a large amount of the books are based. 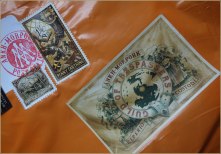 I also love the attention to detail when it comes to the packaging of the parcel. I had to take a photo of the outside of it, with my address covered, as they added some Discworld stamps as well as a couple of extra stickers, which have been cut out and kept to possibly decorate something but I don’t know what. The things inside were well packaged and there was a little note and advert for the Emporium which also fits with the Discworld antique style, I just thought it was a nice touch. 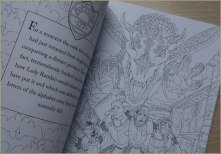 Anyway, onto the things I actually bought. The first thing I saw that I really wanted was the Discworld Colouring Book. If you’ve been following me for a while you may know that I have a thing for adult colouring books. I did stop myself from buying some of the others for fandoms I love but this was too tempting. I got the standard edition which costs £9.99 but there is an artist’s edition where you can pull out the pictures when you’ve coloured them in and that costs £14.99. I really like the fact this one has extra quotes to do with the picture on the other page, I’m not sure how that would translate to the pull out version. They also have some pages at the back with the pictures in colour, they’re really nice versions of the pictures, the originals, and could almost be cut out and framed themselves. I’ll definitely be colouring this and doing a proper review of it in the future. 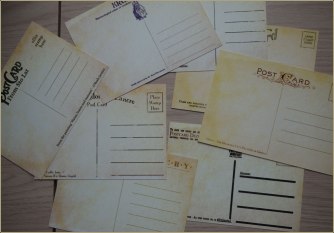 I was torn between getting a stamp set and the Discworld Postcard set of eight postcards (£5) and had actually forgotten which I went for until I opened the package. I do love postcards, I have some other art ones already, they’re just a great way to get some smaller pieces of art, and some time in the future I will probably frame them. I would send them to people but I never seem to send any physical letters to people. I buy enough postcards and letter writing things but it seems like it’s all email. I feel a bit like an old person when I say I love snail mail but I do. Maybe I’ll have to try and get a pen pal, someone who won’t be scared by a postcard that advertises a fictional theme park dedicated to cabbages! I love how these are all different, including the designs on the back, and they’re all for distinct places in the Discworld novels. Like getting a postcard with an Eiffel Tower on it from Paris. They are pieces of art work from the Compleat Discworld Atlas and Mrs Bradshaw’s Handbook but as I have neither they’re new to me, and I quite like having them as something I can frame or use rather than just in a book.

I think I may be saving the best till last when it comes to these Discworld Decorations. They’re £10 for three and designed as Christmas, or Hogswatch, decorations but they’ll be going up all year round on the little tree in my room. They’re detailed laser cut from wood and are roughly 9.5cm across. They have string on them already so they’re ready to hang wherever you want. There are three designs; Death, the Death of Rats and Quoth the Raven. I think some of the Death centred books are some of my favourites and these fit the Discworld art style perfectly. If they ever do any other characters I’ll be on the lookout for them. It also comes in a small red bag and is bubble wrapped so I wouldn’t worry about ordering them online, they look fragile but are actually quite strong and with all the packaging they should arrive in one piece.

As I said it’s just a small haul but I think that everything is really good quality, it arrived very quickly and I love the attention to detail in the packing. Basically if you’re a Discworld fan, or know one, they’re worth looking up as they have pretty much everything covered in their store. Some things seem to be limited edition, they’ve had different board games at different times I think, but most seems to be around as a permanent range.

Speaking of board games I think the Thud! Game may be in a future order, I have no idea how easy it is to play but it sounds interesting and I like the style of the pieces. Are any of you guys fans of Terry Pratchett or maybe if you are have played the game? I’d be interested to know if it’s any good as an actual game rather than just as something from the Discworld to have sitting round looking nice.