I bought three Sleek Makeup eyeshadow palettes recently and have been playing around with them for the last month, this Dream a Little Dream i-Divine palette is one of them. It’s the most recent of the Limited Edition palettes though I’m not sure how limited it will be, some of the ‘limited edition’ ones are there from over a year ago whereas others disappear quickly so if you’re interested in this palette and you can get it then I’d suggest you do it as soon as you can in case it disappears.

As with all Sleek i-Divine palettes it has twelve mineral based eyeshadows in it and cost £8.99 on the Sleek website. I can’t find an official description on what the exact combination for this one is but I’d say all of them are a shimmer of some kind. Six of them I’d call standard shimmers, four obvious duochromes (one of these with glitter in a fairly matte base), a silver foil finish and one that’s a shimmer base with fairly bit glitter particles in it. The colours are so pretty and all cool toned pastels, mainly in the blues, silvers and purples with a green and two cool toned pinks mixed in there. 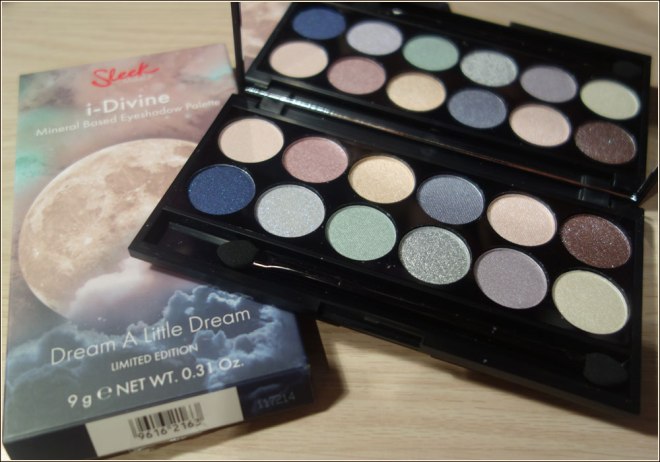 One thing I love about the limited edition Sleek palettes is the outer packaging. It’s just a card sleeve that the palette fits in perfectly but it’s often got an individual art style or image on it, this time it’s a moon with clouds that reflect the colours of the eyeshadows inside. Their standard eyeshadow palettes come in a plainer black packaging and these just stand out when they’re stored so I can easily pick out the one I’m looking for by the end or having them out on display as they’re so pretty.

The actual palette inside is a matte black, like all Sleek palettes, and I’m not sure what it is but something about a matte black packaging on makeup products works for me and makes it look more expensive than it is, maybe that’s just me. This one does have the name in a pale lavender in the bottom right corner so you can see what it is without opening it if you don’t keep the outer sleeve.

I really like the plastic palettes themselves, they feel well made and even in the ones I’ve had for years the hinge stays stiff enough to hold the mirror at any angle and the mirror itself stays nice and clear. The outside is a bit of a fingerprint magnet but inside is easy to wipe clean. It does come with a double ended sponge applicator but I’ve never used them. As far as they go though the Sleek ones are nice, they’re slightly rubbery so grab the product and you can pack on a fair amount of eyeshadow quite precisely.

This is one of those Sleek palettes where it feels almost as if every eyeshadow has a slightly different formula. There may be a couple that are similar but there’s such a range in here I’ll just review them all separately. It definitely has a range of pigmentations alongside the finishes and I can see that being a bit off putting for some, especially if you need your eyeshadows to all be super pigmented.

I’ve swatched them all with and without primer for comparison, some definitely need it to show up at all. Sleek seem to have gone back to their old style of not naming their individual shadows in the palette so I’m just going to name them by how I see the colour and go from left to right for the top row and the same for the bottom.

Pink Duochrome – Very sheer but does apply and blend evenly and gives a pink/purple duochrome effect. Works best on top of other colours or as a subtle wash.

Pale Pinky Lavender Shimmer – Pretty pigmented and creamy, takes a couple of layers to be properly opaque but applies evenly. Blends out fairly well but can disappear if you’re not careful.

Pale Peach Shimmer – Similar formula to the previous colour, applies evenly and pretty opaque. Not the most pigmented but really catches the light Works really well as a highlight colour and actual works ok as a highlighter for your face in general too, just a bit shimmery.

Dark Denim Blue Shimmer – One of the stand out colours to me, applies evenly and opaque and blends out really easily. As it’s finely milled it also works well as an eyeliner and stays well with or without primer.

Light Pink Shimmer – Very creamy and pigmented eyeshadow, can apply a bit thick if you’re not careful as it’s so soft but you just have to pat it on or tap off excess more than with others before applying. Does tend to move a lot if you don’t use a primer.

Cool Purple Shimmer with Silver Glitter – Definitely needs the primer to apply evenly. It’s very creamy which means you need to either pat it on or tap a lot of excess off and build it up or you get a lot of fallout. Blends out well and stays pretty nicely in place but definitely benefits from a primer.

Deep Blue Duochrome – Finely milled and applies fairly evenly but you need to build it to become opaque. I have found that blending it out the very fine aqua or blue duochrome particles tend to spread more than the base. Also with a primer it’s one that leaves a mark where you’ve applied it so it’s easier to blend others into it rather than blend this one out. Does work well as eyeliner too.

Pale Icy Blue with Pink Duochrome – Another stand out colour and quite different from most Sleek shadows I’ve tried with the finish. It reminds me a lot of the blue colour in the Distorted Dreams Highlighter Palette but in powder form. It’s very creamy and easy to use and applies evenly. Straight on it’s just a bit of light blue glitter on a sheer base but when the light hits it shines light blue. The pink duochrome in the pan actually doesn’t really show on the skin and I’m not sure why, whether it’s the base tones in my skin or it just disappears for everyone, it’s showing pink in the photo below for some reason though. 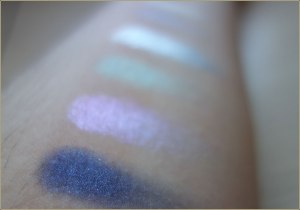 Pale Green with Blue Duochrome – Another sheer duochrome that almost vanishes front on but looks amazing from the side. Very easy to use, applies evenly and has the smoothest duochrome look but it doesn’t build up to be opaque straight on at all. Great for on top of others though.

Silver Foil – Super pigmented and creamy, applies evenly and blends out really well. The best eyeshadow in here when it comes to pigmentation and ease of use.

Pale Lavender Shimmer – Pretty sheer but applies evenly and easily. You can build it up if you really try but it’s best as a wash of colour. Patting it on does make it more opaque but you definitely need a primer for that.

Off White Shimmer – Actually looks like plain white on my skin rather than the off white colour. Nice and creamy, blends well but not the most pigmented. It does build up nicely though it you want a proper white and use a sticky primer.

As I said; there’s a lot of different formulas included in this palette. I’d say in some ways it’s a great palette with the unusual colours and the range of finishes. However, if you’re looking for super pigmented eyeshadows that will give bold looks without having to spend ages layering them this is not the palette for you. If you want the dreamy cool colours and duochrome finishes and like the washes of colour rather than highly pigmented looks then this is worth checking out. I don’t think I have most of these colours in my collection already, the silver, off shite and peachy colour maybe but the others I can’t find duplicates of.

As a brand I like Sleek Makeup; they’re cruelty free, have a lot of very pigmented products, have a decent range of shades available and don’t come with a high price tag. Unfortunately I don’t know how easy they are to find outside of the UK, or how large the range is, unless you risk online shopping. 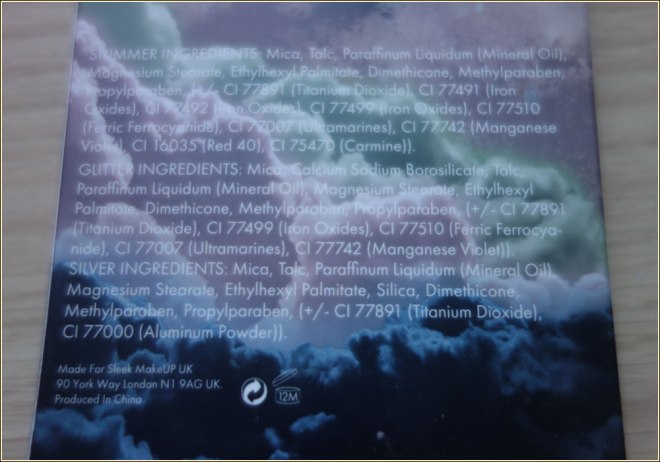 I think this palette might be a good one for people who are just starting with makeup, as well as people who know what they want and these colours fill holes in their collection. It’s not going to be overwhelming with the colour payoff compared to some of the more unusual colour combination palettes which can be nice if you’re just starting and learning what you like. Or even if you’re used to makeup it’s still nice to have some more sheer colours that don’t need to be blended to within an inch of their lives to give a sheer look. Or maybe that’s just me.

Either way I think if you can find this one in store to have a proper look at the colours, no matter what I did I couldn’t get them all to show up as pretty on camera as in real life, then it’s worth checking out.

Have any of you tried this palette? Or the Sleek Makeup eyeshadows in general? Which are your favourites? There are a few I keep going back to even though they’re old and my wish list keeps growing when I find some of their limited edition ones on eBay that I missed out on.