I’ve had my eye on the TheBalm nude series of eyeshadow palettes for a while but had so many neutral palettes I didn’t really need another. Then they came out with the Nude Beach (volume 3) Palette which is full of warmer colours with red and oranges thrown into the neutral mix and it stood out to me. I did get it with money off on HQ Hair but it’s normally £32 for the twelve eyeshadows.

The Nude Beach eyeshadow palette has a mix of finishes, with five mattes, six shimmers, though you could maybe call a couple of them foils, and one that’s more of a matte base with shimmer in it. There are definitely different formulas in this palette and there’s varying amount of pigmentation depending on the colour but there’s a good mix in there if this is the sort of colour palette you’re looking for.

I have to say that the first thing that drew me to TheBalm products years ago was the packaging. I love the sort of vintage look they go for and the style of the nude palette series does stand out with the eyeshadow palettes covering the bodies of the illustrated people on the palette. The outside of the palette is nice enough, it doesn’t stand out too much to me but they definitely want you to know it’s in the nude range with that large text. This design is the same on the card sleeve that comes with it too. I tend to keep them as they do help with travelling to help add security to the magnetic closure but they also keep the palette itself cleaner too.

As with all TheBalm palettes the palette itself is made of card and has a magnetic closure. I’ve never had any problems with the magnets coming unstuck during travel but if you do want to take it with you I’d recommend keeping the sleeve. The only annoying thing about these palettes is the fact that, due to the card hinge, the mirror inside doesn’t stay upright so you do need to either hold it or lean it against something for it to be usable.

In the palette they also include a double ended brush, one end for the eyeshadow brush and the other for an angled eyeliner brush. It’s nice to see actual brushes in these palettes but I don’t actually use them and this one ended up looking slightly different to the one on the outside of the palette. The eyeliner side is ok, a bit too thick and not the style I go for with eyeliner brushes but it would work ok. The eyeshadow end isn’t as fluffy as I expected and the picture shows an angled one, it’s not a big difference especially as it’s a free brush but I thought I’d mention it. Both ends would work if you had no brushes with you travelling or to try using brushes for eyeshadow but I don’t see many people using them regularly really. 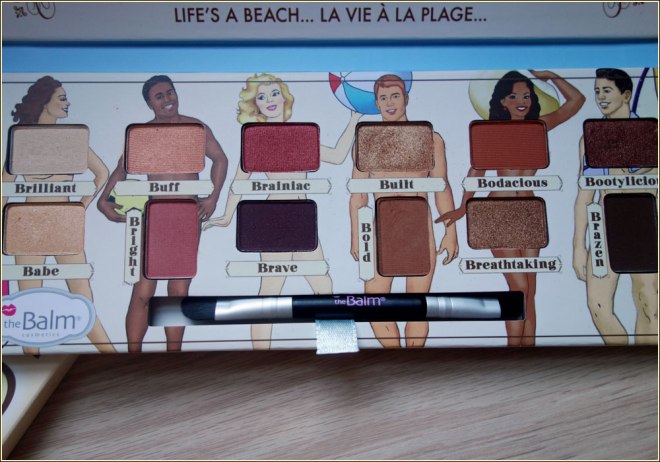 I like the layout of this palette, it is a little odd with some of the colours on the bottom row being rotated ninety degrees to the others but, as the pan is the same shape, it doesn’t really make it any more awkward to use. I also like how they have such a big mirror in there and the little panels in the design that show the names make them stand out. Some of the matte shades can end up making a bit of a mess as they’re hard to wipe off with a dry tissue but use a makeup wipe and it’s fine.

The eyeshadows themselves are a nice mix, it’s almost half and half when it comes to mattes and shimmers, and could be six of each if you count the matte base one with little flecks of shimmer as a matte. I like the range of colours and the mix of finishes means you can pretty much just take this palette for eye looks if you want when travelling, which I did. I also tried them all without primer, which I pretty much always need, and they lasted surprisingly well for my eyes. There was some moving and creasing at the end of the day but I wasn’t left with bare lids and an oddly coloured line in the crease like I often am so I was impressed with the staying power without primer even if I wouldn’t choose to do that.

I did swatch them all on top of a primer and without for you to see the difference. As there are so many different formulas and ways they work I will go through them individually to make it easier but I’ll try to keep it short! 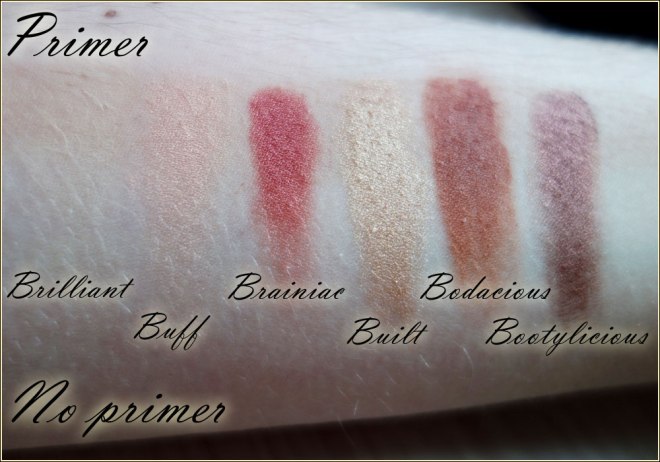 Brilliant – An off white cream matte which works really well to blend out eyeshadows if you’re pale like me or an under brow highlight. Slightly powdery but decent pigmentation, blends really well.

Buff – Light peach shimmer with a gold duochrome. Very easy to work with, goes on fairly sheer but builds up really easily and blends well by itself or with others. One fo the best when it comes to staying power.

Brainiac – Red toned copper shimmer. Very pigmented and smooth with very fine shimmer so almost gives a metallic effect. Blends out well and stays but blending out does tend to go more towards copper than the red colour when it’s packed on.

Built – Golden copper shimmer. So creamy and pigmented, easy to use and the one I’ve used the most. It is very soft so can be a bit crumbly but no real fallout when you tap your brush. Blends really well but does need the primer to last as I found this one moved the most.

Bodacious – Burnt orange matte. Pretty pigmented for a matte, applies really evenly and blends well. It does need to be built up to be properly opaque but it works great as a crease colour or to blend others together.

Bootylicious – Warm chestnut brown shimmer. Another of the really creamy formulas, applies evenly and opaque with one coat but does tend to move throughout the day without primer. Another favourite that is just easy to work with if you want a very pigmented look and works great under the lower lash line with a thin brush as liner. 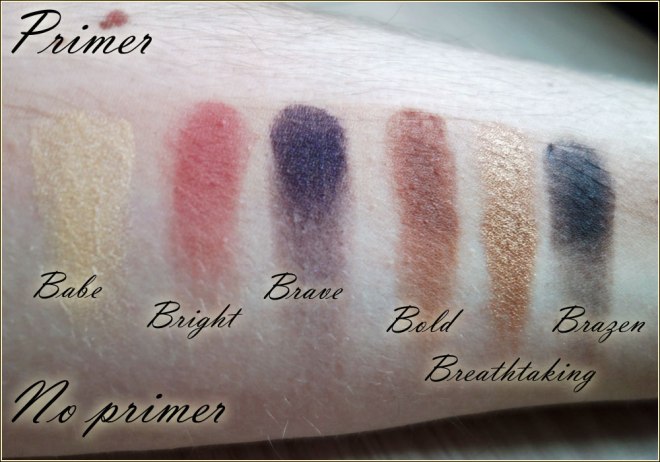 Babe – Pale yellow shimmer. This one is hard to describe and one I wasn’t sure if I’d like but I love it and it’s so different to anything else I have. It’s a soft, creamy, finely milled shimmer that looks fairly sheer from front on but catches the light to give a pale yellow sheen. It can be built up very easily too if you want a more opaque look.

Bright – Pink terracotta matte. This one turns pinker on the lid than it does in the pan as well. A nice warm colour to blend out, applies evenly and has low to medium pigmentation unless you build it up.

Brave – Dark brown matte base with purple shimmer. This one seems an odd one out in the palette. The matte base isn’t great, it’s not very pigmented, doesn’t apply that evenly unless you go over it a few times and then you blend it it leaves a mark where it started so you have to blend others into it rather than trying to blend this out. Not my favourite but has some of the best staying power out of the palette

Bold – Medium brown matte. A similar colour to Bodacious but less orange and a cooler base. Very pigmented, blends out well and applies evenly. I’ve been using this one a lot to blend with Built.

Breathtaking – Copper shimmer. Fairly soft but not too creamy and applies evenly. Opaque with one layer and very easy to use as eyeliner too with a thin brush as it has good staying power.

Brazen – Cool dark brown matte. Very pigmented, applies evenly and does blend well. I find it a bit overly pigmented for some looks and it needs very little on there. Does work well as an eyeliner and has great staying power.

Overall I’d say I am very happy with this palette. For a few weeks it was the only palette I used, it’s the reason my Sleek palette reviews have been delayed as I was enjoying this one so much! I like how the colours are actually almost grouped together with the ones they work best with. Even if I choose to mix them all together they’re sort of giving some suggestions. I think it’s especially obvious with the second and third columns as they’re the pinker and redder tones. It just makes the whole palette look more put together to me.

I’d say that, apart from Brave, they’re all good shadows and they’d be a nice palette for any beauty fan, whether you’re a beginner or more experienced. You can blend them out more or build them up and none of the colours are overwhelming if you’re learning what you like. It isn’t the cheapest palette but if you know you like these colours it’d be one worth looking at. I think that Babe especially is one I haven’t got anywhere else. I don’t have Brainiac or Bodacious anywhere either but I know there are quite a few palettes with similar tones out there, I just don’t own any.

Have any of you guys tried this palette, or any of the TheBalm Nude series palettes? I’ve heard mixed reviews of Nude Dude though the original Nude ‘Tude seems to get pretty positive reviews so would be interesting to see what any of you think if you’ve tried either of them too and could compare them?