It’s summer time, or feels like it at the moment anyway, and sandal weather has started here in the UK so it’s time for my feet to get some pampering. I tend to neglect them a bit over the winter, though I use foot creams that’s pretty much it, so this Nail-Aid 3 Minute Pedi Peel has been sat in my drawer waiting to be used and now seemed the perfect time to give it a go.

It’s a thick foot cream with a 12% Glycolic Complex that says without filing your feet you can get softer skin and it helps with cracked, dry skin anywhere really. It also claims that it works after one use, which I was a bit sceptical about. I found it for £4.99 in a local TK Maxx though I’m not sure if they’d still have it as things tend to come and go quite quickly there. 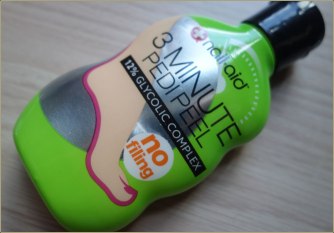 As a brand I don’t think I’ve ever heard of Nail-Aid before. They claim to be the favourite brand for nail care in the US so maybe it’s something Americans would recognise. The packaging is definitely very unusual, at least for a skin care product here in the UK. For some reason the bold black text on the back on the bright green makes me think of some of the hardware brands we get here. The shape of the bottle seems a bit odd too, but when you hold it it’s actually the perfect shape to grip so you can squeeze it easily and, hopefully anyway, get more of the product out at the end.

The cream itself is very thick. It makes me think more of the kind of product you get in a jar rather than to squeeze out of a bottle, and it definitely has the slight sheen of a very butter thick body butter type product so it makes you think it’ll do the moisturising part of the job well. It has quite a nice smell to me, it’s like a subtle fresh coconut smell. I’m not sure what gives it the scent but it’s not what I was expecting from something that looks like it’s either going to smell like chemicals or very perfumed to me.

Applying the cream is very easy, it’s thick but does spread well. As you’re meant to leave it to sink in for three to five minutes I tried sitting with my feet off the floor for that time and letting it sink in but also putting socks on and leaving it to sink in that way. Both ways worked just as well for me but the sock way is definitely easier, especially if you do it at night and there’s no worry of getting the oily cream on anything. It does take longer than five minutes to sink in, or it did for me, but with socks it doesn’t really matter.

As far as the claims of seeing benefits after one used I was surprised that I actually did. I will admit I don’t have cracked skin but my feet have thick dry skin on them that never looks great in the summer and this seems to have really softened that up. It’s also not made them painful like some things aimed at softening feet as the skin there is thicker for a reason so you’re not actually removing any of the skin itself. 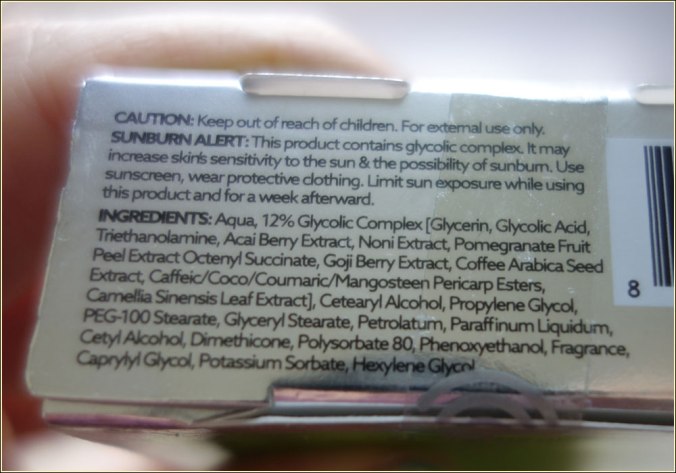 It does feel quite soothing but I don’t know how it would feel on actual broken skin, though as it says that’s what it’s designed for I’d say it’s not likely to irritate it, but do a test first. It does say you can use it on cracked skin in other areas like knew or elbows but I don’t actually have cracked skin so can’t comment on how it’d work there.

One thing it does say on the packaging, in very small letters, is that you need to be careful with sun cream and sun exposure when using this due to the glycolic complex so maybe not one to use in the height of summer, more in the lead up to it when you’re not going to be out in the sun for too long. If you do go out in the sun make sure you use a higher factor than you normally would where you’ve used this and limit exposure for a week after as well.

After two weeks of use every other day there’s still some product left in the bottle and it’s been a great kick start to my summer foot care routine. I don’t know that I’ll repurchase it as I have other foot, and hand, creams that I can use now they’re in better condition, but I’d say it’s a great way to help improve the condition of your skin if your feet need a bit of TLC.