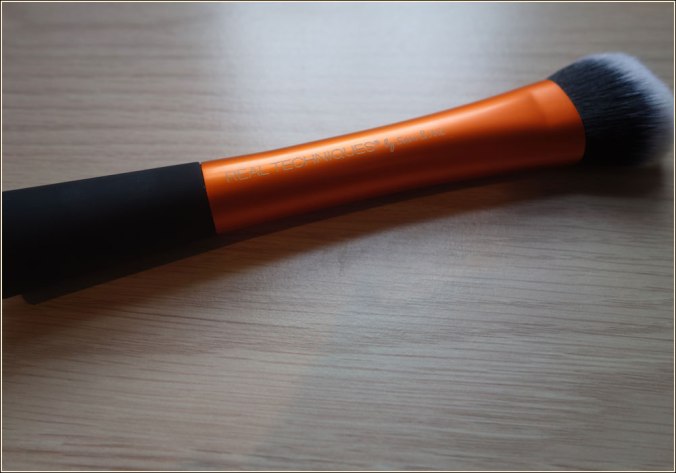 I’ve never really got on with the standard foundation brush, or most of them anyway, as they seem to more push the foundation around than make any of it stick and I always ended up with way more product on my face than I actually wanted. I’ve been loving my beauty blender style sponges but on a recent browse of HQ Hair’s online store I saw the Real Techniques Expert Face Brush £11.99 (£9.59 full price when I bought it) and it intrigued me. It’s supposed to buff the product in and it’s dense but soft so it seems somewhere between a brush and a sponge, at least that’s what I was expecting.

I’ve bought Real Techniques brushes before, one of their eye brushes is the one I use every time I apply makeup, so I knew the quality I’d be getting. The only negative I’ve had for any Real Techniques Brush is how big some of them are, I’ve had so many big fluffy eye brushes I don’t know what to do with them all! I love how they colour coordinate the brushes depending on what they’re meant for, this is a base brush so it has an orange handle, and they’re soft and cruelty free. They are more expensive than a lot of the brushes I’ve bought in the past but they’re worth it to me.

Saying about the looks, this is also carries into the packaging. It’s mainly clear so you see exactly what you’re getting, if you see it in person before buying anyway, and they always arrive in one piece if shipped from anywhere. There’s basic information on the back and pictures of Sam and Nic from Pixiwoo who created the brand. It’s pretty basic packaging but does it’s job and it’s going to be thrown out anyway, it isn’t fancy enough or something that can be used as a holder really.

The brush itself feels really nice to hold. I do love how they have the ferrule being so long and how it curves slightly so it does rest really comfortably in your hand and it sort of falls naturally to where you should hold it. It’s not overly heavy and it all feels well made, I’m yet to have any fall apart and I’ve had a couple for a few years now. The bristles are nice and soft, they feel so good against your skin, and I didn’t notice any sticking out at odd angles, being odd lengths or shedding when I’ve used it. I’ve also washed it and it looks good as new, or almost anyway as the white tips never look like new when foundation has been on them. 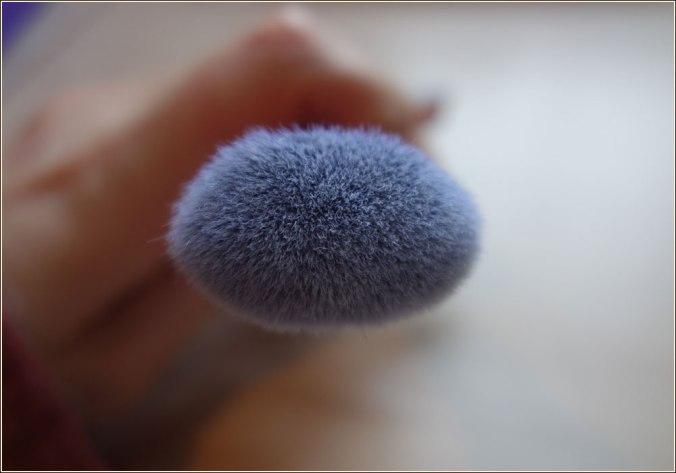 I was expecting the brush to feel denser than it is and maybe for it to be slightly bigger but it’s actually a great size for getting into those awakened spots, like round your nose, without having to switch to a different brush. It buffs the product in really nicely and evenly and you can build up foundation well with it. Compared to my beauty blender it does give more coverage with exactly the same foundations so it either applies it thicker or it doesn’t buff it in as well. Considering the fact the foundation lasts as well as it normally does I’ll go with applying it thicker.

It does pick up a surprising amount of product, it kept on going beyond when I thought there was nothing left on the brush, but does sort of swallow some the first time you use it. For the liquid foundation I normally use half a pump but I needed a full pump with the brush. I also found that it wasn’t so good with thicker, mousse like foundations. The one I often use is a mix of powder foundation and a mixing medium and I had to dilute the foundation a bit with the mixing medium before it would apply it evenly. The powder foundation on its own worked pretty well with the brush too, it definitely seemed to give it a smoother, flatter finish than with a lot of brushes but it did apply too much for how I like my makeup. Again, a higher coverage look than the other brushes I already own. 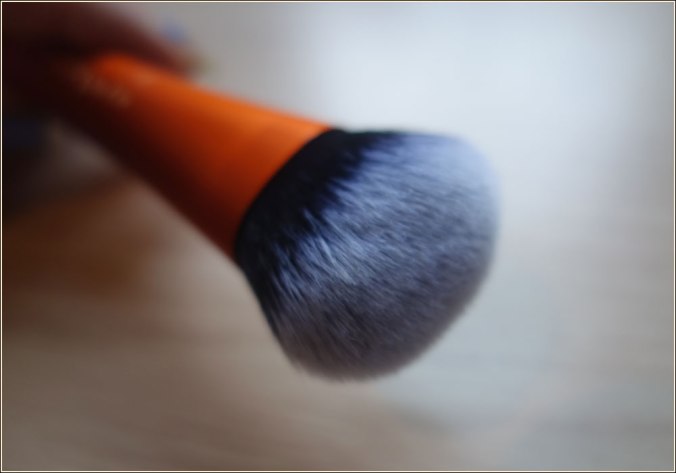 I don’t know if it’s intended for other uses but I thought I’d give it a go, once it was clean, with some other face products. It did actually work quite well with powder products, though the main drawback was the size and lack of precision with some like highlighting, the shimmer spread too far. It worked really well for blush for me, you have to be a bit careful with how much product gets picked up but it’s good for buffing it out afterwards too and does seem to buff it into the skin more than the blush brushes I have so it stuck round for longer. Contouring was, again, fairly successful but more so with the blending out than applying it as it’s not that easy to get a precise application due to the shape. It would work well for contouring or bronzing around the edges of you face though, just nothing that wants too much precision.

Overall I’m very happy with this brush and would recommend it if you want a nice quality brush to buff foundation in. It also looks great in my jar of brushes and is easy to use. Basically it does everything I hoped it would. I’m not sure how much I’ll use it compared to my sponges but I’d say it’s one I’ll mainly use at times when I want a fuller coverage look, things like an evening out or if I just want to have higher coverage.

Have any of you guys tried this brush? Or any of the other base product brushes? I have never really bothered with base products that much but having found ones I like I’m trying different tools to use with them and see what I like best. Any you’d recommend as worth giving a go?