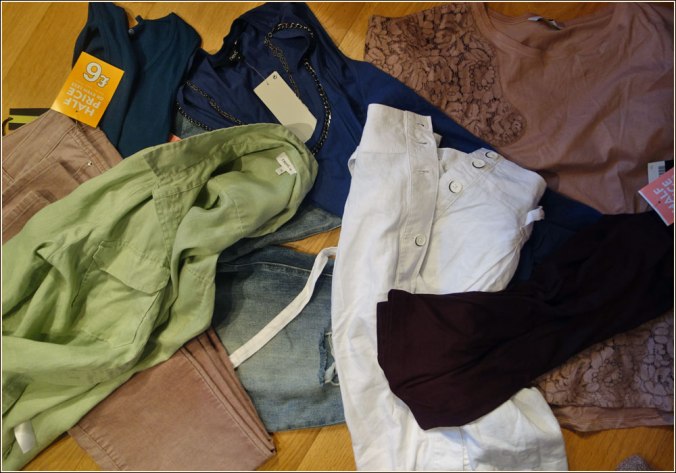 After a recent declutter of my wardrobe I had a list of things I was looking for and I’ve got better at not buying things in sales just because they’re cheap but I did end up getting some things I didn’t have planned on a couple of recent trips to the McArthur Glen Outlet shopping centre in Bridgend. Everything I bought ended up being from the Next Outlet, they have had such good bargains recently, £2 for a good quality top or £10 for some jeans is such a good price if they’re what you want. For years I didn’t get that much from Next but it feels a bit like half of my go to wardrobe comes from there.

The Next Outlet stores often have extra reductions, which is what happened with most of the things I’ve bought, beyond the reductions in the normal sales. They also have older stock in lots of sizes sometimes as well as a range of clothes that are exclusive to the Outlet stores in the Special Purchase range. I know some people have said they aren’t the same quality as the standard line, they’re definitely cheaper than equivalents at full price, but I’ve bought quite a few things from them and they last just as well for me.

The first trip a few weeks ago I got three things, the dusty rose coloured t-shirt with lace detail was just one of those ones that you see it on the hanger and want it. The lace at the top is sheer but the shape doesn’t go too low and show any bra. The lace at the bottom has a t-shirt layer behind and because of the colour both areas are quite subtle. The sleeves are longer than the standard t-shirt but they’re not that fitted, definitely warmer than most t-shirts I own. I love this dusty rose colour, though at £13 it was more than I would normally spend on a t-shirt you can probably tell I’ve already worn it (sorry about the wrinkles). Of everything I bought this is the only thing I haven’t seen in the twice I’ve been since.

The second thing I bought was from the Special Purchase line and one that I went in there knowing I’d get if it was there. I’d seen this pastel green linen shirt on a trip a few weeks before and Next closed before I had time to go back and get it and if it was there I was buying it. Luckily it was there and it’s like a spring or summer version of a mustard shirt I have been loving from them over the winter. It cost £18 at full price though is only available at the Outlet stores.

The two pairs of trousers I bought were from the different trips. I went in knowing I was looking for a fairly light wash pair of jeans and these ripped mid wash jeans were £10 and fit me perfectly so I had to keep them. I’ve never wanted jeans that come pre-ripped (it happens eventually for me anyway!) but there was something about these that I liked. I’ve worn them on a long car journey and they’re so comfortable and easy to wear and I love the straight leg style. They’re a medium thickness denim so will be good for the spring, maybe not so much summer.

The pale pink corduroy straight leg trousers were one of the surprise items. I didn’t go into it planning to get any but these are so light, are so comfortable on and this colour has definitely become a favourite for me. These are XL so I might have to roll the hem up or hem them to make them shorter, which I can do easily, and at £6 even if they ended up being around the house trousers they’re worth it.

Some of the things I got rid of in the declutter were a load of vest tops that had just become old and faded so these three tops were exactly what I wanted. The two plain vest tops are £2.50 in plum and an indigo.

I love the detail in the blue vest top, the chains add something different and the smaller ones are detachable for washing. I also really like the detail at the bottom as it adds shape. This one was £2 and is going to be great in the summer as it’s so light and airy.

The final thing I bought was another surprise in a white linen mix skirt. This was definitely not planned, I’ve never owned a white skirt or white bottoms in any way really, but I’ve loved the look so the £6 price tag means that it’s worth trying for me. This is so light and yet still has some weight to it so I can see it being ok in breezier days too. I will say that their skirts seem to come out small, I’ve gone up a size to fit this, but as long as you know that and go up a size they’re great quality and I can see this being a classic and lasting for years.

When I was there last weekend everything apart from the pink t-shirt was still there. If you can put up with searching through all sorts of clothes and sizes then I think it’s worth checking out a Next Outlet near you, especially at the moment. It can be hit and miss, they often seem to have not much that I’m interested in and the same stock seems to stick around but at the moment the stock seems to be changing and it seems to be a better range rather than the leftover sales stock that you often see.

The only negative with the Outlets, or at least the one in Bridgend, is no changing rooms! You have to buy the things, try them elsewhere, and then return them. I know at one time people used to buy them, try them in another shop and then return them but I think they’re being more careful about that recently. At least they’re open late six days of the week so if you go in the afternoon you have the chance to return them in the evening even if you’re not in the area for long.

I don’t do these clothes hauls very often, to be honest I don’t buy things that often and they end up being the odd thing here and there rather than enough to be a proper haul. I think I’m feeling like a bit of a wardrobe overhaul recently, maybe it’s the fact it’s spring but I felt like a bit of a change and some of these are definitely different from what I’ve got while still being clothes I can see myself wearing a lot. I guess it’s good to have a change every so often, I’ve ended up sticking to what I know works rather than trying new things.

6 thoughts on “Next Outlet Clothes Haul”