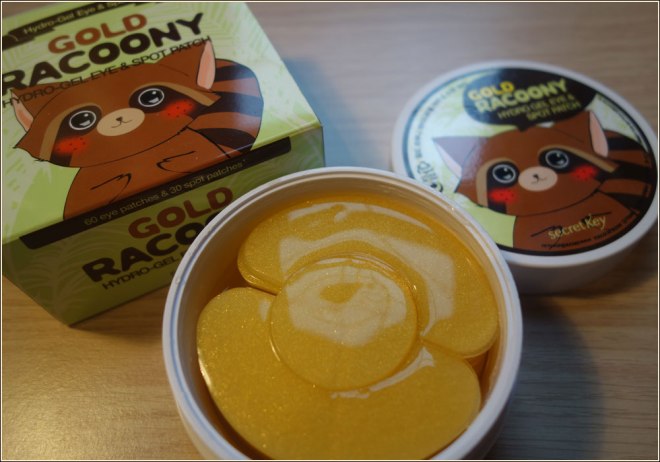 A while ago I bought some Secret Key Gold Racoony Hydro Gel Eye and Spot Patches from eBay as I’ve liked under eye gel patches before but they’re so expensive here in the UK. These are a Korean brand and in general cost around £7 – £10 depending on where you get them from. I got them from the f2plus1 eBay store (the eBay store for Beauty Net Korea) and at the moment they’re listed for £8.55.

These eye patches contain gold and claim to be good for refreshing your skin as well as hydrating it and improving elasticity. A lot of these patches with gold in claim to be anti wrinkle and with the amount you get in each tub they’re actually quite a cheap way of treating this if they actually work. Each pot contains 60 of the eye patches, the semi circular shaped pieces, and 30 of the spot patches. You can use them daily if you want and then they’d last a month, but I don’t think they’re something that would be part of my daily routine so a couple of times a week makes them last three or four months. 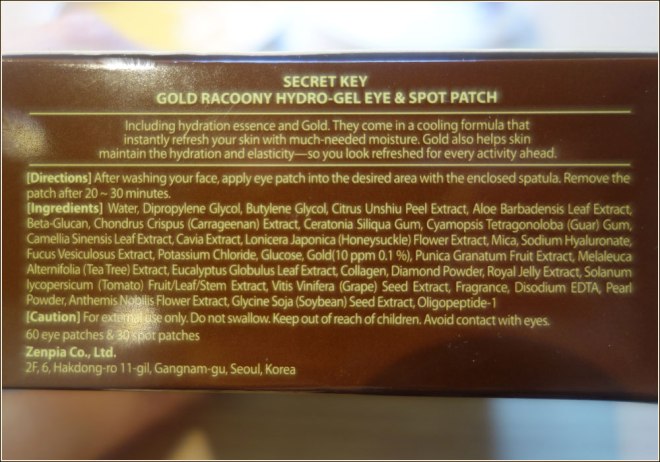 There are so many of these eye patches in Korean beauty that it was quite hard to pick one. I went for two different ones as I gave one to my mum for mother’s day and this was the one I kept for myself. This is definitely one of the ones with the cuter packaging style, the racoon is on both the pot and the card outer box, and I’d say for me there are others I’d personally prefer looks wise to have out on the side. I do like how they have one side of the box all in English for if you can’t read Korean.

Inside the screw top lid there’s a spatula to help you to remove the patches which is very useful as they’re so soaked in the formula that they can be quite slippery and stick together. There’s also a second lid that just pulls off, it seems a bit over the top but with the amount of liquid in there it does add an extra seal and it keeps it all air tight. It can get a bit messy, I found that it’s best to wipe everything off before you close it or it’ll be slippery next time you try to get one out and it’s a bit frustrating if that happens.

The patches themselves are probably in the middle when it comes to thickness, they aren’t the kind that will just be absorbed into your skin but they are thin enough to stay put. The shape of them seems a bit odd for under eye patches, they are a perfect circle when fitted together and the part that goes next to your eye is almost too round to sit in the exact spot I’d choose to have them. It does mean they can take a bit of manoeuvring to get them in the right spot and you have to make sure they’re flat or they do slip around a bit and can fall off, but once you’ve got the hang of it they’re easy to use.

The spot patches are a lot bigger than I expected them to be. I guess I was expecting them to be the sort of size you get for actual spot treatments but these cover a fair amount of skin. I think if I had a specific area I wanted to put them in I might actually cut them to the right shape. As I don’t I just put them on my face in various places and after they’ve been sat on there for the twenty to thirty minutes it recommends I sort of pat them around the rest of my face so it’s applying the serum everywhere. I have seen on some that they recommend dissolving one of these in hot water, though I didn’t see that for this products so I haven’t tried it yet. Have any of you guys tried that method? It’d be interesting to see how it worked as it might be good for my compressed plain masks.

It’s quite hard to describe the scent, at least to me, it’s a generic skin care sort of smell, maybe slightly sweet and floral but the kind of smell you often get in moisturisers that don’t have a specific scent. They do feel very nice and cooling and are relaxing when you have them on. They do a great job of waking me up when I first apply them but after a while they warm to skin temperature and I’ve forgotten I have them on a few times.

As far as long term differences go I’m not sure I’ve seen any. My skin wasn’t particularly dry beyond what my standard skin care was helping with but I think in the short term it did moisturise them for the remainder of that day. I think they’d be great to use before a night out to hydrate under your eyes before putting makeup on. I haven’t found any cumulative effect of using them a few times a week so I can’t say that they have any real benefit over eye creams I’ve used, besides the fact they feel a lot more luxurious.

I have really enjoyed using these and I’m definitely going to be getting more under eye patches, they’re so easy to use and the difference between them and an under eye cream is like the difference between a face mask and a good moisturiser. Even if it doesn’t do much extra it feels more of a treat to me. I think that next time I might try a different make, if only to see if there are any that have more benefits for my skin type, but these are a really nice formula and might help if you do have fine lines as a short term solution, like for a night out, as my skin felt nice and hydrated for a short time after.

Are there any eye patches that you’ve tried that you’d recommend? I have tended to find that Korean skin care is cheaper when it comes to these than the standard ones I’ve found in the UK but if there are any easily available here I’d be willing to give them a go too.