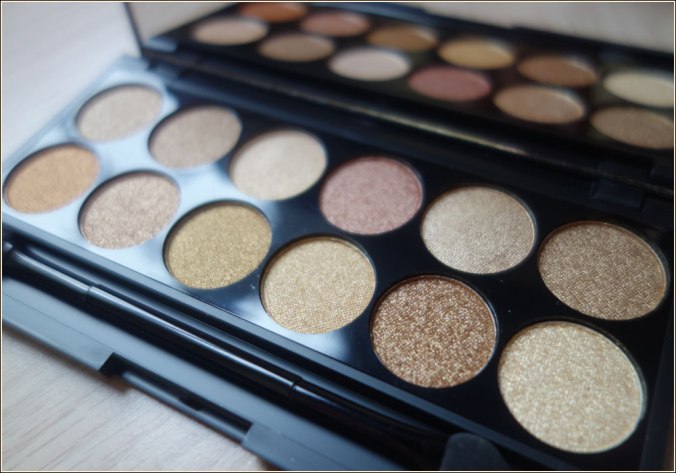 This eyeshadow palette review may be shorter than my normal ones, which might be a good thing! The Sleek Makeup i-Divine Eyeshadow Palette in Gleaming Gold was a limited edition palette and I’m pretty sure it was available exclusively in some of the 2017 Sleek Christmas gift sets, though I have seen it popping up on eBay so it may be available if you’re lucky on there.

There are twelve eyeshadows in this palette and it’s the standard Sleek Makeup layout with the twelve round pans and a large mirror. They’re all shimmer this time and a range of golden based colours, from an orangey copper to a light champagne colour. There isn’t an official price for this but, going by the cost of other Sleek palettes, I’d guess it’s around £8.99. Looking at this, as first impressions, it seemed like this is one of those palettes you use with another, as everything is shimmery and sparkly, I was expecting to use it now and then and dip into it for a gold colour to add to a look. 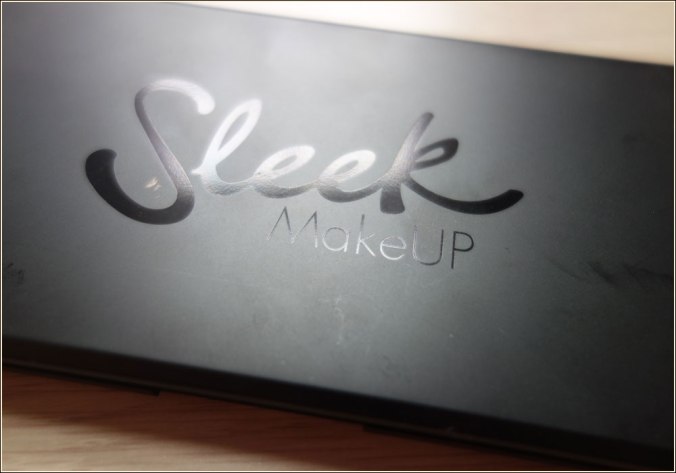 If you’ve ever had a Sleek Makeup palette you’ll be familiar with the packaging. I like the matte black finish with the glossy logo, though it’s definitely a fingerprint magnet, especially when there’s no outer card sleeve. The palette has the name on the back but no other information, I think this is the way they do it in gift set palettes, but it is the same size and contains the same amount of product as the standard palettes.

I always say this but I do love the Sleek palettes themselves. The mirrors are nice and large and have a hinge that keeps them at any angle you want them. They’re great for travel as I’ve never had one open accidentally on me and the mirror doesn’t distort, crack or break over time. This one also has the standard double ended sponge applicator. I’m not a fan of these but if you are then the Sleek one is probably one of the best I’ve tried. It almost feels slightly rubbery and grabs a good amount of product so you can pack the colour on quite precisely if you want to. I wish they’d start adding brushes to their palettes but I guess this keeps the price down and I already have more than enough eyeshadow brushes! 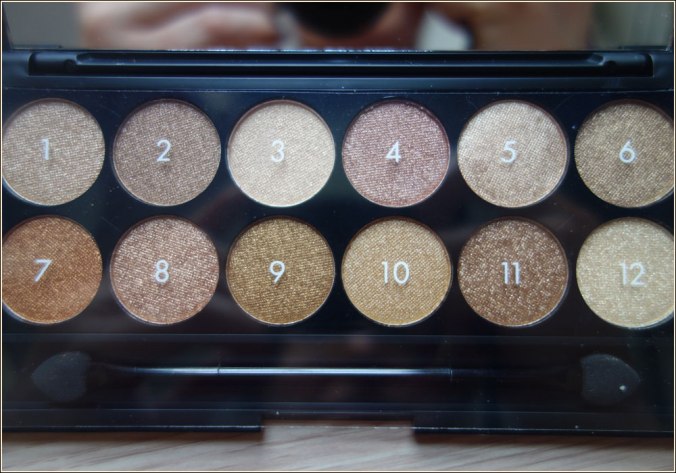 There aren’t really any bad eyeshadows in this palette, there are some which seem to be a slightly different formula in that they’re more sheer and a couple of these include glitter along with the shimmer. There are probably three different formulas, or they feel like it anyway, in the palette but they’re not that noticeably different and they all behave the same way and last as well as each other. For some reason Sleek have gone with giving these eyeshadows numbers rather than names and these come on the clear sheet that protects the mirror. If you lose the sheet you lose the names, though it isn’t much of an issue I know it’s something that can annoy people, though as these are simply numbered 1-12 you can tell which is which. 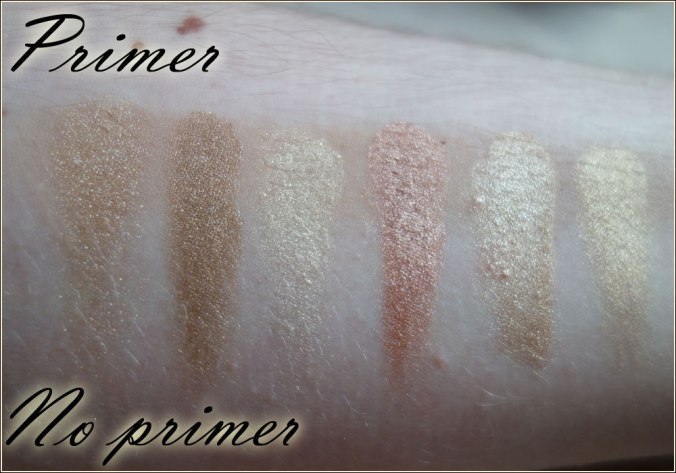 The top row has most of the paler colours in the palette, or that’s how it looks in the pan. However, 4 and 5 are two of my favourites as they have the nice creamy texture that is very pigmented and are actually two of the brighter colours in the palette. Colours 1, 3 and 6 are more on the sheer side and do have slightly bigger chunks of glitter in them. These could actually work ok as highlight, if you have the right skin tone, and are great for a sheer sweep of colour or to brighten and add highlight to areas on the eye. 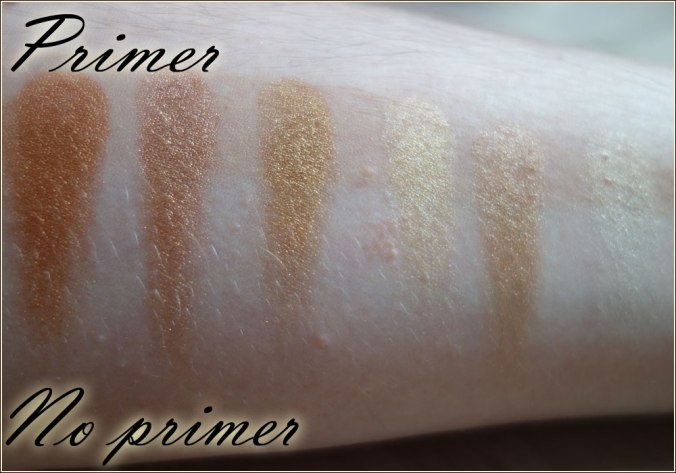 The second row seems to have more yellow and orange golds looking at them in the pan and I love the first two colours. Colour 7 is more what I’d call a copper rather than a gold and 8 is a pretty rose gold, both very pigmented and the kind of colours I’d go for in any palette really. The last three are on the sheer side again, but they do blend well with anything I’ve tried and actually work well on top of other colours if you want a hint of sparkle of golden sheen, especially in the middle of the eye it can highlight it on top of the colours you’ve chosen to use. 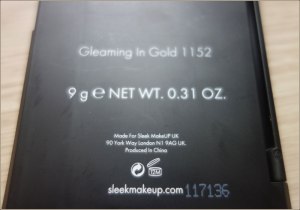 I think this is a Sleek palette that’s worth looking at if you want some sparkle and gold in your makeup collection. If you’re looking for something that is all bold, dramatic shimmer colours then this one probably isn’t for you due to the more sheer ones in there, but these are still a nice formula and can be built up. All of the colours can either be blended out or built up to become more dramatic if you want, but they do benefit from a primer base to hold them in place for any length of time as they’re soft I tend to find they can move later in the day without it.

As this one isn’t really available any more, and it’ll probably be luck as much as anything if they pop up on eBay, I’d say that the All Night Long palette has a couple of similar golden shades in it, along with the A New Day palette. They’re both ones that include other colours too but they are in the permanent collection and still £8.99 so might be worth looking at if you want some shimmery gold.