This nail look isn’t exactly fresh but I had fun doing it so I wanted to share it with you guys, and I kind of love the final effect so will definitely be doing this more with other pigments too. I’ve had some sample sizes of loose eyeshadow pigments hanging around for year without getting any use so I thought I’d see if they worked for nail art, it’s not like I had anything to lose as I was probably going to get rid of them somehow.

I decided to go for a multicoloured pastel mix of colours for most of the nails with some added nail art with white, that was supposed to look like sparkle and stars but kind of failed, and a pearly unicorn on each of the thumbs. I’m happy with how this has turned out and think I’ll be going for the pastel multicoloured nails for a family wedding coming up, just worth knowing that they don’t necessarily last that long so I’ll be doing them a day or two before rather than a while in advance.

Anyway, onto the nails themselves. For the base I did three coats of Red Carpet Manicure’s White Hot gel nail varnish, curing it with a top coat too as I was planning on using normal nail varnishes as well and if you’ve cured it with a top coat the purify liquid you get that just cleans the finished nail removes normal nail varnish so it’s not starting from the beginning and just redoing any nail art that goes wrong. Good job I did as well, I had to rethink how I was going to do it a few times!

To get the pigment onto my nails I ended up starting with the gel base and curing that before adding the pigment itself. It left it tacky but not wet so the pigment stuck but it didn’t get too gooey and messy. This is most definitely the messiest step and I forgot to take photos with the multicoloured nails.

I tried two different ways of doing it, the first I just tipped the different colours onto my nails, like the white in the photo, and this did give a nice subtle look when I blew the excess off (more sparkles everywhere!) but it felt like a lot of waste. The second way I tried on my right hand was to use the piles that were on the tissue I was using to protect my desk surface and just dip my fingers onto this. Again, very messy around my nails but not so much excess. This way did end up with brighter colours, though I’m not sure how much that shows up on the photo I took of both hands together. I then added nail art, I tried the pen and it just poked the pigment around so went with a nail art tool and white nail varnish which did work better but I’d change how I did it next time. To finish them I added the gel top coat, very carefully and trying not to have the brush pull the pigment around. 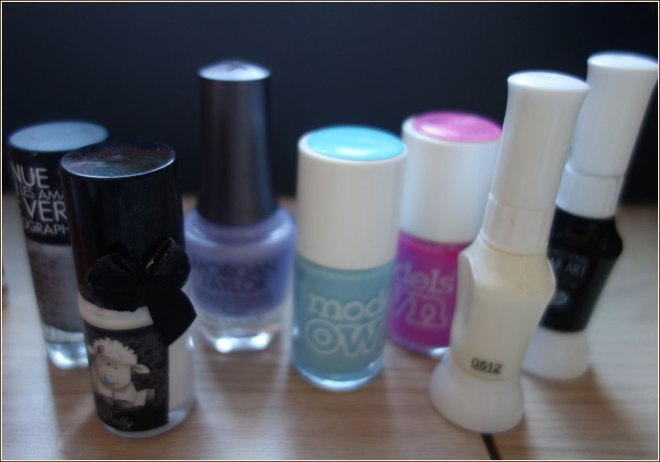 For the thumb nails I used mainly white with a bit of blue in there and did the dip method, it felt quicker, before adding the top coat and curing it. I then did the nail art with a black nail art pen and different coloured nail varnishes; Po-Riwinkle from Morgan Taylor and Sugar Rush and Lilac Flush from the Models Own HyperGel Soft Pop collection. I did add some of the Gosh One Night Holographic nail varnish for the horn but you can’t really tell it’s any different to the white background, before finishing it off with a top coat. 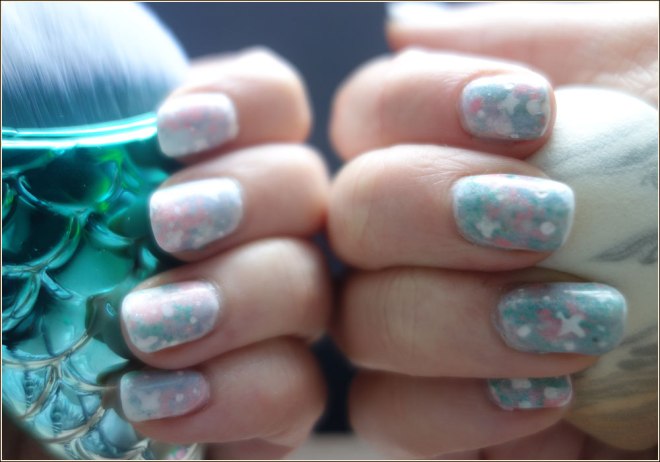 I’m happy with how these turned out, especially as it was a bit of an experiment, but I would definitely say that I’ll be doing a top coat on the pigment layer before doing any nail art next time as it made it so much easier and meant I could restart if I went wrong. I would also recommend doing the sprinkling method of adding the pigment, as the hand where I just dipped them in has already started to crack and peel off. The top layer with the pigment is coming off around the edges but the white base is still there so it looks more patchy than the other hand. 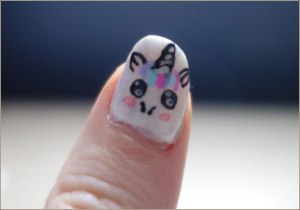 Overall a success that I’m definitely going to be trying with other pigment colours. Have any of you guys tried using eyeshadow pigment for nail art? Any tips or tricks you’d recommend I try for the next attempt? I was pleasantly surprised with it and I now have a new use for the vials of pigment as they’re too pretty to get rid of but not the most practical when it comes to actually using them for eyeshadow.