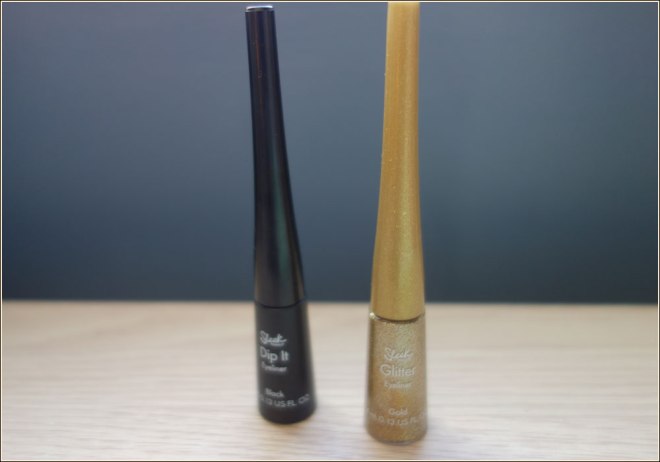 Both eyeliners are liquid and have a brush in the lid and both hold 4ml of product. I can’t find the Gold Glitter Eyeliner anywhere at the moment, though the Steel version is £4.99 so I’m guessing that would have been the price for this one too. The Black Dip It Liquid Eyeliner is available in Boots and the Sleek website for £4.99. There are two versions on the Sleek website, I think this is the newer packaging and I don’t think the formula has changed from the rounder pots.

I love the way these look, the shape of the packaging altogether seems very modern and I love how tall and slim they are. I’m not sure how easy it will be to get the last out of the bottle but until then I’m a fan. The Glitter Eyeliner does have a clear portion that means you’ll be able to see how much product is left, the standard Dip It though has a matte black base section which goes with the Sleek theme for their packaging but you can’t see the product inside. 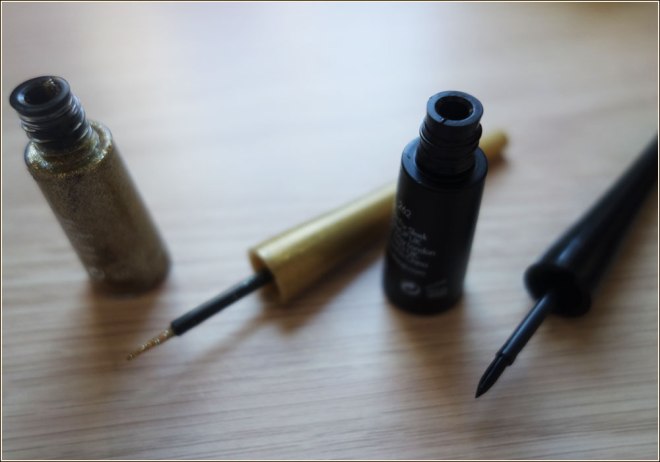 The handles for these are easy to hold, I wasn’t sure before I used them how easy they would be to control with the tapering but they fit comfortably in your hand and I haven’t found that they slip at all. The length makes them easy to control, you hold them like a pen really, and the fact that such a short part of the brush actually has the product on means you can get quite close without getting it all over your hands.

They do both have very different brushes and I’m not sure which I prefer. The Gold Glitter Eyeliner has a fine standard brush on the end. It’s very soft and flexible and grabs the glitter but means it gets applied evenly, rather than a blob of glitter at the beginning and then the clear base afterwards. It’s easy to use and you can get a precise line close to the lashes.

The Dip It Eyeliner is more the brush style that I liked in the past, though it’s probably not technically a brush as it feels like a slightly rubbery plastic. It’s thicker than the Glitter Eyeliner but you can get a very precise line with it if you use a light hand. You can actually get a finer line with this, despite it being thicker at the base of the brush. It’s definitely a lot firmer than the other but you want to use a light hand anyway for the precision so it doesn’t feel like it’s poking your eye or dragging the skin.

The Gold Glitter Eyeliner itself is very densely packed with glitter, it almost looks like it’s a solid colour but is glitter in a clear base. It dries pretty fast and I didn’t have any fallout for quite a while. I did find that after a few hours some of the glitter particles did fall off but it didn’t leave any bare patches in the liner itself.

I think the Black Dip It Liquid Eyeliner may be my new favourite formula. It’s fairly thin but doesn’t bleed and it glides onto the skin so easily. It dries quickly, within two minutes I could rub it and nothing happened, and becomes a matte black which I really like. It’s very pigmented, one coat is enough for a true black line, and when it’s on there it sticks and I didn’t have any flakiness at all. It doesn’t claim to be waterproof but I found that the swatch on my hand survived a few hand washes with no obvious patchiness or flakes, it survived my standard makeup wipe pretty well too so needed a proper makeup remover to get it to budge.

Overall I am very happy with these two, I think I may have found a liquid eyeliner in non pen form that I get on with. I’m torn between which applicator I prefer, I like the rubber one because it’s so precise but I do like the brush. I think that when I finish the products I may clean off the gold eyeliner brush and keep it, try it with the black eyeliner and see which I prefer.

I think these are definitely worth checking out if you’re in the market for a liquid eyeliner. The Black Dip It is particularly good, unless you really don’t like the style of the applicator, as it dries so quickly, doesn’t budge and it’s easy to control and get a very fine line. It’s one that’s good for any level of makeup user and at £4.99 isn’t too expensive to see if liquid eyeliner is for you.