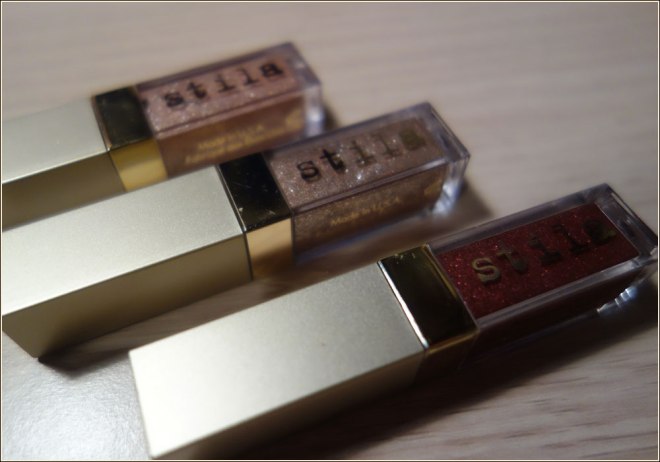 Today is part two of the Stila Liquid Eyeshadow posts, the second half of the Eyes for Elegance set I bought before Christmas. If you want to read about the three Shimmer and Glow Liquid Eyeshadows you can find my post on them here.

The Glitter and Glows definitely fit their name, there is a lot of glitter in these and there seems to be different sizes within the glitter too so you get a more dramatic sparkly finish with these. They have been around for a bit longer but I can only find two of the colours I have in the US Stila store and one in the UK one so I’m not sure if the third was limited to this set. The three colours are; Peachy Sheen (light peach), Smouldering Satin (light taupe) and Next to Notte (deep red or burgundy). The set of minis, these are 2.25ml rather than 4.5ml, cost £45 but individually at full size they’re £23. 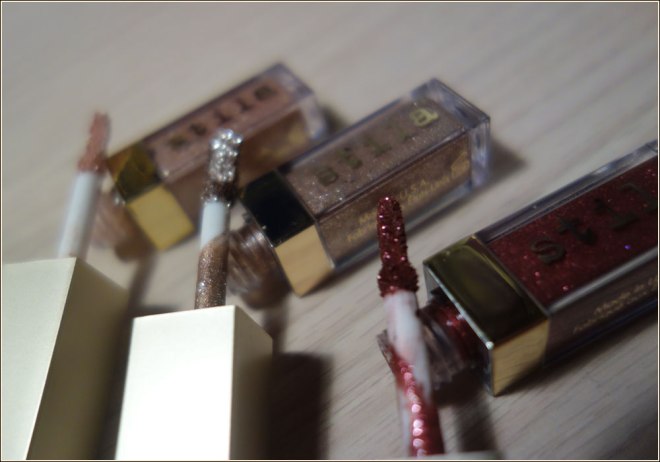 I do like the mix of colours that Stila use on their packaging, the slightly matte or satin finish on the creamy old gold for the top is the kind of colour I really like. Also the fact that the products tend to dry down the same colour, or almost, as when wet means that the clear sides show you exactly what it’ll be like when it’s dried.

The doe foot on these is a flat and thin and very fluffy so it grabs quite a bit of the product and is soft on the eyelids. It’s definitely got enough on there to get a good coverage if you want high impact, though you have to be careful and dab it gently if you want a more subtle look.

The formula for these dries pretty quickly and the base almost has a matte hint to it to me, not that you can really see it through the glitter. There are two sizes of glitter and the bigger bits are slightly gritty feeling, which isn’t an issue really if you don’t use too much. I found that if I applied it too thickly it tends to crack a bit and the larger bits do fall off over time which isn’t what you want. If you do want to blend these at all, it’s not the best for that, you have to be quick or you end up just dragging the glitter off and then it’s out of the base and doesn’t last well. Instead, to get the blended look, you have to apply a bit in the middle and then dab it thinner as it blends into the next colour rather than the normal way of blending.

There do seem to be two different formulas for the base, Peachy Sheen is nowhere near as opaque as the other two. It has a sort of thin base that adds a tiny hint of colour and then you have the larger glitter pieces suspended in it. I’m not a fan of this as much, though it can be good to add some peachy glitter on top of another colour and to seal in the colour if you wanted and you’re careful when patting it on. This is the one colour I can’t find anywhere, apart from eBay, and I’d say it’s the weakest of the three (or all six in the set) so I can see why it wouldn’t be a permanent line product. 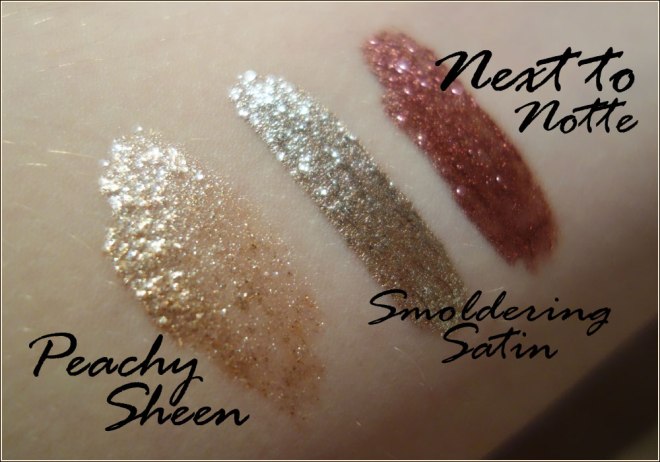 Smouldering Satin is, what I’d call a light taupe, and very opaque. Probably my favourite of the three and the one I have found the easiest to use. One thing I will say is that this looks quite a bit different in person to any of the colours in the online stores. Next to Notte is a deep red of burgundy, though I think it’s supposed to be a reddish brown it’s a bit too red for that to me. It’s not my favourite colour but definitely works as a dramatic look because it doesn’t blend well without losing the glitter. These two are both very pigmented and work well as an eyeshadow. I did try them as an eyeliner and, although the pigmentation worked well, the larger glitter particles did fall off so I’d say it doesn’t work for that for me.

As I said at the beginning I couldn’t find one of them, Peachy Sheen anywhere, but Smoldering Satin is in both the UK store and the US store and Next to Notte is available in the US only, at the time of writing anyway.

I think these are worth trying if you like very glittery looks and liquid eyeshadow. These definitely aren’t as easy to use as the Shimmer and Glow ones I got in the same set but they do have a more dramatic effect. I think that these minis will last me a long time so I’d say that these half sized gift set sizes are more than enough to get an idea of what you like. Price wise they’re also better as I got six colours for less than it would cost for two full sized ones while getting an extra 50% of product if you go by volume.

Overall I am definitely going to be using these for a more dramatic look but, personally, I prefer the Shimmer and Glow as the product is easier to use and there’s no fallout. That was the main problem I found with these, the fact that the glitter sometimes seemed to come off the base and I’d get glitter fallout starting to appear after the first hour or two. Otherwise they stayed well, didn’t move and actually worked fairly well as a base if you applied the colour on top when it’s still tacky.