I didn’t really do much sales shopping this year, well compared to normal anyway, but I saw that Unicorn Cosmetics were having a sale and couldn’t resist a peak at what they had on offer. They’re the original creators of the unicorn brushes that have been everywhere this past year and the makeup brushes are so pretty I did end up getting some. This first one is the Bubbles Fan Brush and is from the Mermaid brushes collection, which has four brushes with different colours and styles of mermaid tail one them. In the sale this costs £14.99, normally they’re £17.99. The mermaid brushes are all face brushes and they each have a flexible tail, it’s made from silicone which is easy to clean and feels slightly rubbery so has a great grip.

This may sound like an odd thing to say but, when I first started to use makeup (I was late compared to a lot of people) the fan makeup brushes always seemed to be one of those brushes you had to know what you were doing with. I’ve never had one and I realised that there are definitely gaps when it comes to my makeup brushes now that I’ve started to expand what I do with my makeup beyond basic eye looks and some liquid foundation. I guess I bought this one over the others as it is so different and I’ve recently started to try highlighting and it’s just so pretty.

The box this came in isn’t something I’d normally comment on but it was very well packaged, lots of shredded paper as well as a plastic bag around the pouch the brush came in, and I love the fact it has the unicorn and mermaid design on the outside of the plain brown box.

One thing I love about Unicorn Cosmetics, something I was aware of but didn’t realise how much I’d love, is the artwork that comes with the brushes. I’m actually considering getting this framed for my wall. With the mermaid brushes you get the group picture of the four mermaids but the mermaid that your brush is based on is a shiny finish as opposed to the matte of the rest of the artwork. I like this touch, I imagine that for the set the whole lot would either be shiny or matte but it does distinguish the mermaid and show how close to the artwork the brush is, or the other way around. On the back of the card is a bit of an introduction to the brush, though it’s written as a biography of the character with some tips on how to use it at he bottom rather than being a whole sheet on how to use a fan brush. 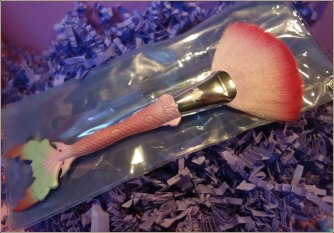 The brush also comes in a clear plastic pouch which has a popper closing it. I’ll be keeping in it for now but I’m not sure about long term. It’s wide enough and keeps the bristles protected along with the brush handle so I’d recommend using it. It also has the nice detail of a little mermaid tail charm which I though was a nice touch.

The brush itself is so easy to hold. I will admit that before it arrived I did wonder about how comfortable it would be with the fins and how the flexible grip would work but it’s great. The flexible grip isn’t too soft, there’s enough resistance that you’ve not got a floppy brush and with this particular brush there was no need for the flexibility for the brush aspect of it. As a handle, however, it does mean it moulds to the shape of your grip almost and you can manoeuvre it slightly differently. Again, not much of an issue with this highlighting brush and the way I used it but I can see it being useful for brushes where you’d want to get into crevices and hard to reach spots as it gives you extra control if you need it.

The design of the mermaid tail is gorgeous, I love the mix of colours and the fact that the finish has a shimmery duochrome look to it. When it catches the light there are hints of yellow in there and it really does remind me of a fish’ scales.

The brush end is great for picking up highlighting products. I will say that I don’t have that many, most of mine are in palettes, but you do need to have a larger panned product really to get the best from thus. I didn’t have any trouble with the smaller pans that are in palettes that have a bit of space between them, things like the Balm face and eye palettes, but the Sleek palettes were a bit thicker to use doe to the shape. The longer thin pans weren’t too bad when I got used to them, it just took more trying to get it right.

The brush is sort of part way between most of the fan brushes I’ve seen when it comes to thickness, it’s not as thin as the smaller ones but most of the larger fan brushes I’ve seen are denser and thicker. I like this size as it means you can be more precise if you want or apply the highlighter (or mattifying product as well) and it kind of works if you use it width ways as well up and down to create a subtle dusting of highlighter before buffing it in or just leave it like that. It’s not what it’s designed for necessarily, though it does mention mattifying on the back of the card, but if you apply some foundation powder or finishing powder and use this you can mattifying areas precisely as well, just make sure it’s before you use anything shimmery as the shimmery seems to stick into this brush and I can’t see it coming out completely before the next wash. 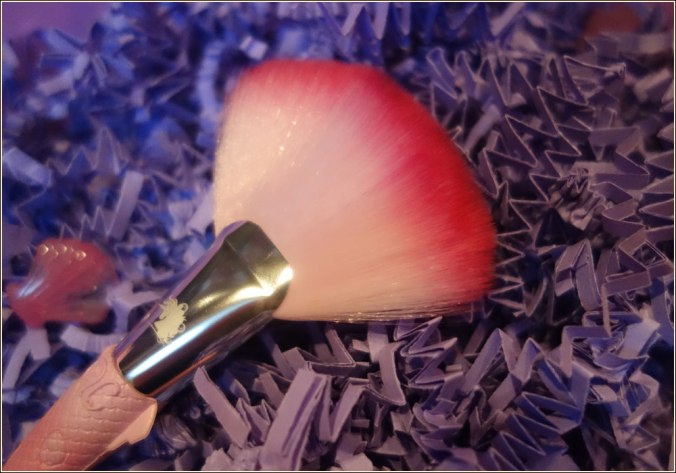 The bristles are so soft that they’re really comfortable to use and they pick up enough product that you get some shimmer without being covered in sparkle. I also found that there seemed to be less fallout with some off the products than when I’ve used other brushes, maybe because this wasn’t what they were designed for but it did impress me even with some of the highlighters that head towards glitter rather than a nice glow. The only thing with the bristles for me was that they got here smelling of plastic, not something that’s too annoying as it goes away after a while but it was strong and I don’t think I’ve ever had a synthetic brush smelling like that when I’ve bought it. I thought to start with it was the brush handle, maybe it’s the plastic cover for the bristles that you can remove that’s transferred it. I’ve left it outside the pouch for a bit to see and the smell is going more so it’s not something that will last forever.

Over time I plan on getting the whole collection, it’s not that big but the price of these is quite a bit higher than ones I’ve bought before even in the sale, definitely a step up from my £1.50 seven year old Elf brushes! However I’ve decided that I’ll tie it into my goals for 2018 and they’ll be a treat when I get to a milestone, something to do with eating and living healthy whether it’s sticking to the diet for x amount of time or losing x amount of weight, something that I’m aiming for.

I’m happy this was my first of these, it’s definitely different from any other makeup brush I’ve owned in the past, both design and use, so it stands out from my others but also means I’m not starting it off with a duplicate. Plus with how easy it is to use, provided you have big enough pans of highlighter, how soft and the design I would definitely recommend them if you’re on the fence. They’d be a great gift for someone who’s a fan of mermaids and beauty, especially at the moment with each brush being in the sale as well as the whole set.

If you can’t tell already; I love this brush and think it’s helped to convert me to more expensive brushes. Definitely worth getting over the cheap mermaid brushes I’ve seen around if it’s within your budget. These are a luxury treat item for me but so worth the extra cost. I will definitely be checking out their sales in the future.