I may have ended up spending more than I originally planned in the Lush Boxing Day Sale. I only went into be one day but I’d originally planned on getting the 12 Days of Christmas gift box and decided against it when I saw it. I ended up regretting that decision and as my mum.and sister were going in the next day asked them to get it so here’s everything that came in that gift set.

The Twelve Days of Christmas hat box is always one of the big ones from Lush, they bring out a version every year, as it has twelve of their Christmas products in it. I think it was £35 in the half price sale and was one that there were quite a few left of so there may be some in some of the lush stores. This year it has a wide range of different product types as well as scents so could be a good introduction to Lush if it’s in your budget.

As some of these things may be still available in your local Lush I thought I’d do a bit of a mini review of each of them in case you manage to find any to pick up. They also sometimes seem to pop up in the kitchen throughout the year do if there’s something you’re interested in it may return at some point. Don’t quote me on that, I don’t know what’s coming or how Lush decides what’s going up, it’s just going by past experience. 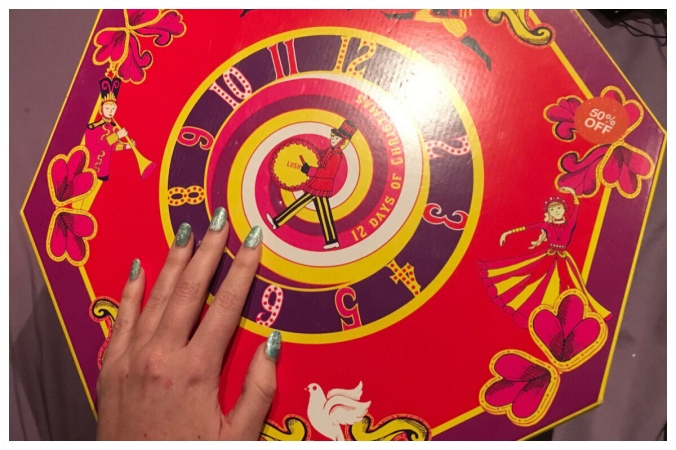 The box itself for this set is massive, I had to take a photo with my hand to actually show scale as I was surprised at the size of it when we walked in and saw the pile of them in the store. I’m not sure how much use it will get as storage, it’s an awkward height and size for anywhere but maybe I’ll think of something. If nothing else maybe Christmas decorations can go in it on top of my wardrobe. 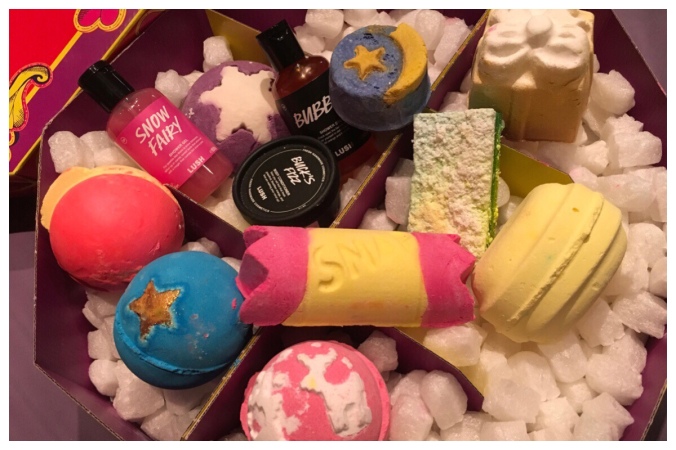 The Golden Wonder Bath Bomb is an old favourite, I always stash a couple of these after Christmas. It’s a slightly citrus sweet bubbly scent with a hint of fruitiness to it and the colourful middle makes the water nice and bright. The scent is supposed to be Buck’s Fizz, an orange and champagne mix, and although it isn’t as fresh orange juice I can see it.

The second product in the same scent is the Bubbly Shower Gel. It’s not a creamy base but it isn’t too drying a slightly less powdery, sharper version of the scent compared to Golden Wonder. Works really well as a bubble bath too, especially adding some bubbles to the golden wonder bath bomb.

And the final product in that scent actually has the name Buck’s Fizz and is a body conditioner. I haven’t tried any of this year’s version but you use it in the shower, leave it on for a bit and then wash it off and it leaves your skin moisturised, basically like a hair conditioner bit for your body. It can leave your skin a bit greasy and not one I’d recommend for in the bath. This is a small 50g pot, I think they only sold larger pots when they were on sale.

The second shower gel is a 100g bottle of Snow Fairy. This is so sweet and a slightly fruity bublegum sort of smell that just smells of a generic sweet shop scent. It’s basically what I think pink would smell like if a colour had a scent. A slightly more creamy base that Bubbly but not that moisturising and lathers fairly well.

The Christmas Cracker Bubble Bar is on the large side for a bubble bar at 160g and would do three baths I think. It’s pretty much a straight citrus smell, a very refreshing lemon lime scent to me.

The Plum Snow Bubble Bar is even bigger, I had one and used it for two baths but it could do four. I did a full review of this one but it’s a very close scent to the taste of a slightly unripe plum and these make a lot of bubbles with bright purple water. Basically it’s a bit like combining the colour of a bath bomb with the bubbles of a bubble bar and definitely one I’d recommend. 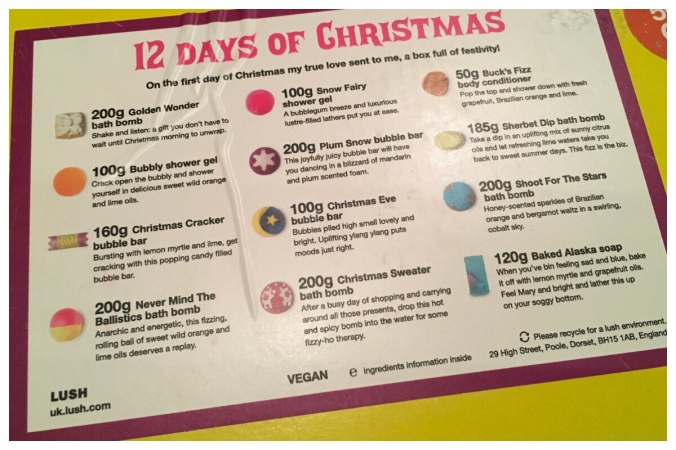 Never Mind the Ballistics Bath Bomb is one that came out last year and is a bath bomb that has a thin layer of bath melt on the one half. The scent isn’t very Christmassy, to me it’s almost exactly the same as some Peach sweets I used to get, they were called Smints were some sugar free so this bath bomb isn’t overly sweet, it has a hint of sharpness to it.

One of my favourites from the past is the Christmas Eve Bubble Bar. This is one I find hard to describe, it’s slightly sweet but definitely floral and a bit powdery. The main scent is ylang ylang but I’m not sure what that smells like exactly. I’m sure these are getting smaller each year but it gives the bath a nice dark blue colour and normally has decent bubbles. It’s a great one for relaxing and soothing so it’s great for either the lead up to Christmas or just afterwards to relax.

One of the ones I was planning on buying a few of is the Christmas Sweater Bath Bomb. I did do a full review of it but it’s a nice, slightly spicy and warming bath bomb that does make a bright red bath. I love it and kind of wish I’d got more but then looking at how much my Lush stash has grown this Christmas it’s probably a good thing I didn’t!

Another I was planning on stashing was the Sherbet Dip Bath Bomb, which is basically a lemon sherbet in bath bomb form. It smells amazing and refreshing, great for a morning or early afternoon bath that fizzes away for a while and the smell is pretty strong.

I’ve been sitting here for a while smelling the Shoot for the Stars Bath Bomb and trying to work out which of their older scents it reminds me of and it hit me. To me this smells exactly like an old bubble bar they did called Ma Bar, a bit of a play on Mars Bars as it was a slightly chocolatey honey scented bubble bar. This is almost like Honey InWashed the Kids, or any of those honey scented products, but with more of a chocolate hint to it. I’m hoping this will leave the water blue and gold, better than the brown of Ma Bar!

The final product of the twelve is a soap in the form of a 100g chunk of Baked Alaska Soap. It’s light and cirtussy and refreshing but feels quite drying. I’m not sure what the white layer on top is supposed to have as a benefit but it’s definitely not one of the more mositurising soaps.

And that finishes off the Lush haul, or hauls. I didn’t mean to get that much this year but there’s something about going into actual stores that makes me end up buying more. I was definitely happy with this hat box, though I’m not sure what I’ll do with the box itself, as it had so many of the products I was planning on stashing anyway.

Did any of you get anything from the lush sales? I ended up doing a couple of other sales orders more recently so there might be one or two more sales haul posts. Did you find any good buys in the Christmas sales?