It’s the second to last day of the Marks and Spencer’s advent calendar, though I know a lot of advent calendars end today and they always did when I was growing up. When does advent actually end? I always thought the 24th but so many include the 25th now too. Anyway, today’s gift is the Pur Illuminate and Glow Primer, the second primer in three days so I kind of wish they’d spread the two out a bit more. It’s a corrective primer that has some shimmer in it to give a glowy look for a base. The full sized tube is 30ml and £24 so this 10ml tube contains £8 of product. It has a bit of a peachy bronze look to me and definitely has shimmer in so I’m not sure how much I’ll use it as primer.

The second thing from an advent calendar, well kind of, is the Forest Walk Wax Tart from the Scented Seasons Shop Twelve Scents of Christmas set I bought and have been picking them out at random as a kind of home done advent calendar. The set was £15 for twelve wax tarts or they can be bought individually for £1.25 each where you pick your scents.

I can’t believe it’s Christmas Eve already! We have some things we do on Christmas Eve every year, they’ve become traditions as well as some of them being practical. Things like getting food bits ready or watching certain movies, I love these things that become traditions and are different for each family and don’t necessarily have anything too Christmassy about them.

Unfortunately the Forest Walk Wax Tart is mainly pine based and, as my sister had an allergy to pine trees, I can’t burn it at the lament. It’s definitely one of the stronger scented wax tarts in the set and smells of pine along with some other things, it’s not pine cleaner to got the slightly artificial pine scent in there. I want to say there’s cranberry too, it seems a bit common mix and there’s something slightly tart in there to me, plus a scent I can never really identify but gets called ‘fresh’ or ‘snow’ so must be a mix of scents that give it that name somewhere.

I love these wax tarts, they’re a fair size and last well. The ones I’ve burnt have lasted over six hours, at six they still have decent scent left so have been put back in their bags, with a good throw though they do vary in scent strength. Some fill a room, others fill the whole of the upstairs landing which is why I’m not burning this one yet.

The Pur Illuminate and Glow Primer is definitely on the shimmery side. The product is fairly thin and as the tube is one of those with just a hole in the end, probably because it’s a mini one, I can see this getting very gunky quite fast with the shimmer particles in it and the way this primer sets.

I’m not a fan of shimmery primers, I tend to find they leave me feeling more like a Twilight vampire than giving me the glowing look they’re meant to as the shimmer seems to get through the foundations I wear and I get that overall shiny look I don’t really want. This is definitely a very shimmery base, I’d say it looks more like one of the more subtle highlighters than a primer, and the shimmer does come off if you leave it without foundation. It started to make its way through the foundation I use, it’s a light coverage one, probably within half an hour when I tried it on my hand, though I forgot to take a photo I’ll do a proper review when I’ve tried it with different foundations. 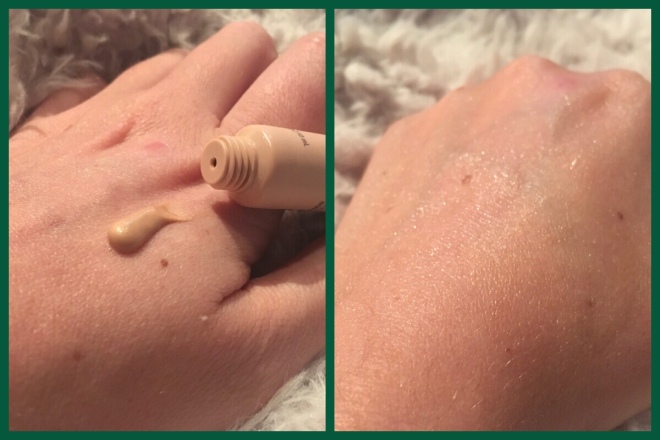 The consistency of the primer is nice, it’s very thin and a small bit goes a very long way so this tube will last quite a few applications. It takes a while to set, or rather it doesn’t completely set unless you put the foundation on. It remains tacky for a good half hour, the but I left exposed did anyway, and during that time you can move it but it does transfer onto everything. It’s one that you can definitely leave for a bit rather than having to rush and get the foundation on before it sets. I can’t say that it actually helped hold the foundation on my hand any better than normal, it almost seemed to make it so it was easier for the foundation to move around and get transferred off but I’ll give it more of a go and see if maybe I had too much of the primer on there before I judge it properly.

It seems a nice enough primer if you like the shimmery glow style bases and the kind that remains tacky. I tend to go for the ones that feel more silicon based, even if they aren’t, and set with the smooth feeling, over the tackier ones. I will also give it a go as a highlighter, see how that goes, it really does feel more like that to me.

I think the Christmas Eve traditions bit of this post will mainly be pictures, it’s so much prettier than a wall of text and I just wanted an excuse to take photos of our Christmas things! The first one, or one of them, is eating in the dining room. We don’t do it much so it’s a bit special, especially with it all decorated.

We always put all the snack food out on Christmas Eve, mainly nuts and chocolates but we can’t do Christmas without at least one box of Turkish delight and a Terrys Chocolate Orange. 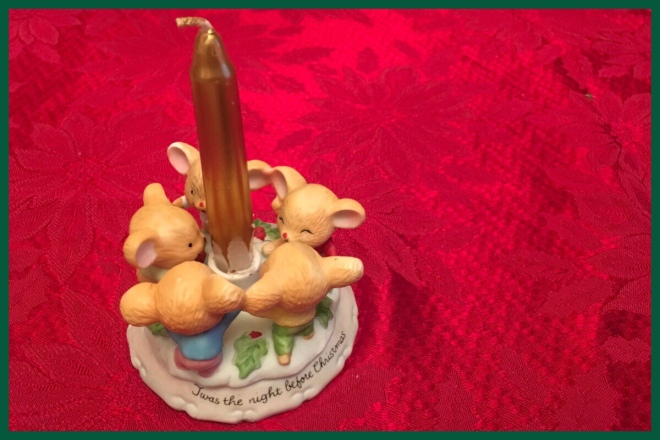 We also burn this night before Christmas mouse candle holder with a candle in it every Christmas Eve. We couldn’t find a small candle this year so it’s a large candle cut down. I think my Nana and Grandad gave us this and we’ve burnt it since we were little, they died when I was very young so it’s nice to keep this going. 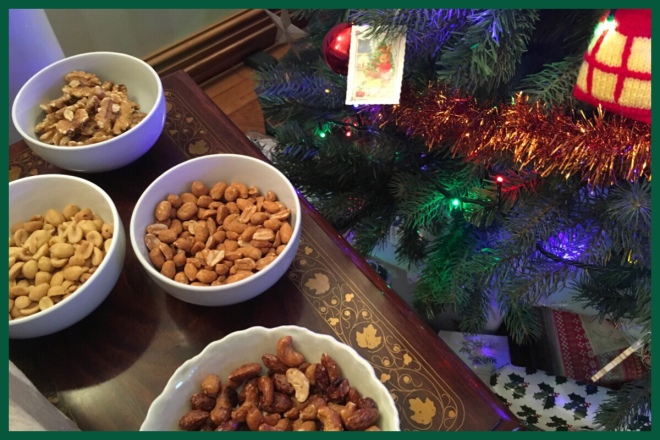 Hope you all have a good Christmas! Enjoy the day whether you celebrate or not! I’ll have a post for tomorrow but I’ll be spending the day with family so probably won’t reply so see you on Boxing Day!