Title: The Killing of Polly Carter

The Killing of Polly Carter is the second book by Robert Thorogood and the second of the series of books based on the BBC detective series Death in Paradise. If you’ve seen the Tv show before you’ll be familiar with the characters, it’s based on the original group, and the setting in the Caribbean with the fictional island of St Marie. If you haven’t it has the feel of a modern day Agatha Christie set in a hot country with the same gentle style and unexpected twists in the story before the murderer is exposed at the end in a very Poirot-esque way by gathering all of the suspects together and going through them one by one.

It does have some light comedy and the TV series is a light one that most of the family can enjoy, maybe not the youngest members as they may either not understand or not like the actual murders or genre, but I’d say teens and up would be able to enjoy it depending on what they like. This book definitely goes for the same audience, fans of Agatha Christie style detective stories of all ages.

I really like the look of these Death in Paradise books. They have a cut out silhouette style that reminds me, again, of the Agatha Christie era with fairly minimalist designs. The whole series has that look, though they don’t have anything else that ties them together with the covers apart from the bright colours and the plants, though it would be hard not to include them with the setting really. There’s a bit f a summary of the story on this one and it has a picture of the first book, which I quite like as t means that you not only have the title to look out for but know what to look out for cover wise. As they’ve only been released with one cover t does make it easier too.

This series is written by the creator of the TV series and the characters are all true to the original group and the actors who played them on television. The main character, DI Richard Pool, is a deceive who was sent from the UK to the Caribbean to solve the murder of the previous detective and, against his own wishes to start with, ends up staying on the island as their senior officer. The rest of the police are locals with Sergeant Camille Bordey being second in command and the main character to play off Pool. She’s free and goes with her heart as opposed to Pool who follows rules and is very stereotypically English. The remaining two police officers are Sergeant Fidel Best, who I think is recently promoted in this story and young and easy to please, alongside Ordinary Police Officer Dwayne Myers who is the longest serving officer but doesn’t want a promotion, or anything that has anything to do with paperwork, who knows everybody and can find anything out as long as you don’t ask too many questions about who told him the information. 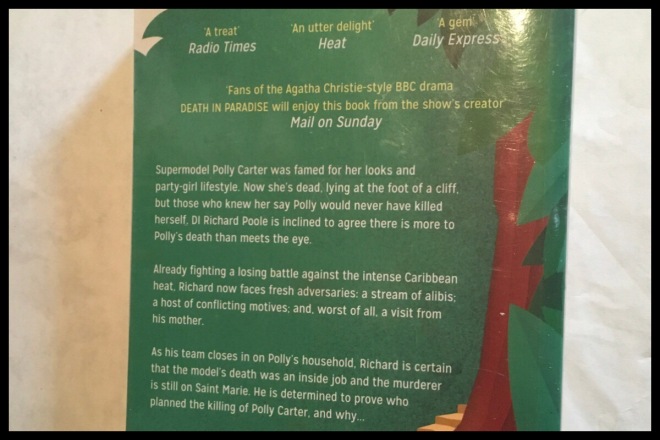 To me the characters themselves are me of the book’s strengths. The story is good and I like the style but the group of police officers are what makes the Death in Paradise series stand out to me. These characters are the kind of group you wouldn’t expect to get on, as you often get in detective shows and books, but when they’re thrown in together in the situation they each fill gaps in the others’ expertise so make a great team that has plenty of opportunities for comedy and a hint of drama at times. They’re all believable and relatable in their ways so they make the story fun to read as you become invested in them. You do have an added investment if you go into it knowing the characters, though I think they’re introduced and included enough early on in the book and in a way that shows you who they are and throws you into the group and their relationships and makes them genuinely likeable.

The storyline for this particular book is based around a well known model, the Polly Carter in the title, and her seemingly impossible murder. It starts off as a suspected suicide but that changes when Pool arrives and finds a detail that seems insignificant, as often happens in the series, and focuses on it. This leads to various suspects and motives getting reviewed as the story carries on. As with a lot of good detective stories you follow the investigation but the final reveal is hidden when the group, or normally Richard, sees a certain detail and sends members of the team off to do things before revealing it to the group. This often leads to the rest of his group not knowing the answer so learn the culprit along with the audience, or reader, and the room full of potential murderers.

There were definite twists in this and pretty much everyone was a suspect at some point so it was pretty open as to who it could be at the end. You also didn’t get the sudden end of a long lost someone or other who was never heard of before suddenly popping up ten pages before the end and the suspects you’ve been following all being innocent. That always seems a bit odd to me but seems to happen in some stories. This story feels like everything came together and had a satisfying conclusion.

I really like Robert Thorogood’s wiring style, it’s easy to read and flows well. I found myself wanting to read more and reading another chapter when I meant to put it down which I always think means it’s a good book. There are no overly complicated words, it fits with the characters and the genre and audience with it being aimed at the same audience as the TV show.

I think fans of the TV series will like this book, and the other book in the series I’ve read, as it stays true to the original characters. I also think it’d be great for fans of light detective series, Agatha Christie style, without too much gore and graphic detail as if that’s what you want this book doesn’t go into the detail of some detective books I’ve read. It’s a nice light read, I read the first one in the summer and it was perfect for lying outside in the heat and just relaxing.

There’s a third book in the series which I will probably be reading next, I’m definitely planning on reading it some time soon anyway. At the moment there are only the three, the third was only published a few months ago, but I’m definitely hoping they’ll be releasing more. If you haven’t read the books or seen the TV series I definitely recommend them if you can find them.

One thought on “Book Review: The Killing of Polly Carter (A Death in Paradise Novel) by Robert Thorogood”