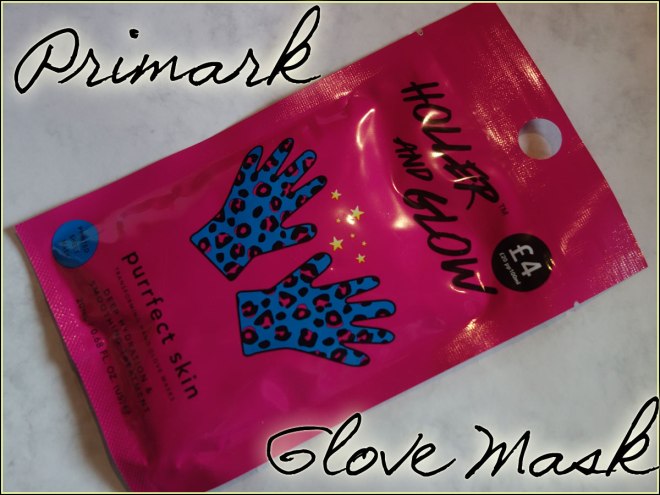 Having recently found the range of masks in Primark at my local store and seeing a hand mask I had to get one. Given my love of sheet masks I was interested to see how a hand mask would work and how it would compare to just using hand creams as I’ve never used any kind of hand mask before. This is the Holler and Glow Purrfect Skin Transforming Hand Glove Masks, which is a bit of a long name, and part of the printed mask range so it has a bright turquoise blue and pink leopard print design.

This pair of gloves costs £4 and you get one set for that. It didn’t specifically say it’s a one use only thing but I don’t think I’d want to use it twice. Basically it’s a pair of plastic gloves with, what feels like, a glove shaped sheet mask with the mask formula infused in the sheet inside the outer gloves. 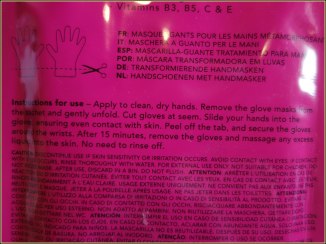 The packaging is fairly standard for a sheet mask, aside from the bright colours which do make it stand out, as it’s a sachet that holds the pair of gloves and isn’t resealable. It has the instructions on the back, which are pretty easy to follow, along with the ingredients and a huge paragraph of caution which looks like it’s would be a lot of warnings but it’s the same warning in multiple languages.

The gloves themselves feel like they’re pretty good plastic, they’re not exactly flexible and remind me of a tougher version of those ones you get in hair dye kits. I do like the fact they have a print on as, unlike a sheet mask, you do have the extra layer and having it be clear and see you hand through might look slightly odd with these.

The gloves come as one piece which you have to cut down the middle on both sides of the seam to give you two separate gloves. This means no mess in the sachet so the outside of the gloves are clean and you also have an extra seal if you wanted to open the packet and check them out before you use them. When I first looked inside I thought there was only the sheet mask material on one side but it turned out it’s like a glove inside a glove, just very hard to separate the two sides, so that took a while.

There are pieces of sticky paper tape that you’re meant to use to secure the gloves around your wrists, these didn’t work and broke almost immediately so I would recommend having some normal tape with you, plastic would be best but washi tape would probably stick fine as it wasn’t the sticking to the gloves that was the problem, just the strength of the tape. Also, it is hard to stick the second one with the tape that comes with it as I found it stuck to the first glove rather than the one it was meant to. Having a roll of tape and scissors made it so much easier. 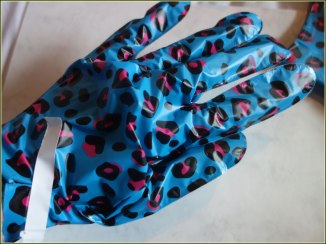 Wearing the gloves was a bit of an odd feeling. It felt like my hands were really wet and sweaty. Again, like when you have hair dyeing gloves on too long and your hands get all sweaty in them (or maybe that’s just me). It was not the most relaxing feeling to start with but after three or four minutes I got used to it. Having them on for fifteen minutes felt so much longer than when you do it with a face mask, it just wasn’t as relaxing.

One thing I was surprised at was how easy it was to do things with the gloves on. I could do a lot of things, as long as they didn’t need grip like opening jars, and only had to pull it so my fingers reached the end of the fingers of the gloves so my iPad registered it. No problems with my phone or doing a bit of tidying so they’re good for if you’re planning on doing other things, maybe applying a face mask or doing your toenails if you want a full pampering evening with them.

When I took the gloves off my hands felt like they’d been sat in water for ages. They went very wrinkled and slightly weak feeling, which is how mine go after a long time in the bath so it’s probably not a universal thing. It says rub in the excess mask mix but I couldn’t do that as there was so much. I let it sit and dry for  ten minutes before rubbing it in and then wiping the excess off as I wasn’t about to walk around with wet hands for half an hour or so. It had a bit of a weird feeling, I seem to be saying that a lot with these, where it felt a bit like after you use a wet wipe and your hand feels somehow moisturised, sticky and a bit dried out all at the same time.

I tried this a few days ago to see if there was a lasting effect or if there was any difference at all. I have to say that, after the first half a day, there was no difference at all. The slightly odd sticky, dry, hand wipe feeling lasted maybe an hour or so and that’s it, beyond that I felt no difference at all. Maybe my skin felt smoother, in a slightly silky feeling way, though this may just be wishful thinking, hoping to see a change. It was like it had dried with a powder on my skin, like when you use talcum powder and you get that feeling like some of the powder is still there. I hope that description makes sense, it’s a weird feeling for something that claims to moisturise and I definitely felt the need for hand cream the next morning.

I don’t think I’d buy this again. It didn’t have any real benefits but it is the kind of thing I can see being a fun thing to try for an evening in with friends. Get some face masks, hand masks and a movie or just sit around and they’d be something different to try. I would say they’d make an unusual gift for a beauty lover but the fact the £4 is actually printed on the mask would put me off giving it as a present even as a novelty. Basically it’s something fun to try but I wouldn’t say this is worth getting if you want to pamper you hands. Get a good hand cream, put a thick layer on and sit without doing anything or with gloves on for a better hand pampering time.