I realised I don’t tend to do any of these kinds of blogs recently so as we visited Bletchley Park I thought I’d post about it. Last week, after the rush of the Bank Holiday, I went and visited Bletchley Park with my parents. It’s one of those places that I’ve always known about and we live about an hour away but none of us have ever been to so we decided to give it a visit. Given the amount of things to see there we thought we’d do two visits, or see what was there and then decide, and I am so glad that we went in thinking that as we saw about half of it and I was exhausted afterwards, I’ve only just recovered. One thing worth knowing before you go is that the tickets are valid for a full year and you can have as many visits as you want in that time. I can’t find that anywhere on the website so it was a nice surprise when we went and picked our tickets up.

Bletchley Park is a museum dedicated to the codebreakers from the second world war. They were based here, at its peak I think there were 9,000 people living and working in the complex, and it was all top secret. They broke the Enigma code that the Germans used to send messages to each other along with other codes used at the time, I think Enigma is probably the most famous. There’s a mix of standard museum style exhibitions, some of which are temporary and change, and quite a few blocks and rooms that have been restored and furnished as they were at the time.

Just a warning, this post may be slightly more picture heavy than most, though I haven’t included all the photos I took as a lot are fairly similar and, to be honest, it’s one of those places where the information and the people involved in it are the things that bring you there rather than the buildings or architecture itself. Apart from the mansion the buildings were all put up quickly between 1939 and 1944 during the war so they aren’t the prettiest. 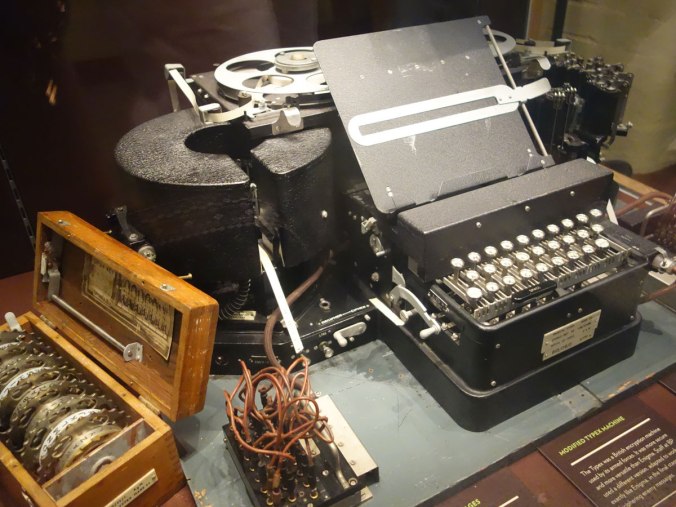 The largest blocks are full of museum style exhibitions, the machines involved in the codebreaking themselves as well as information on how they broke the codes and the people involved in Bletchley Park from the beginning. There were also some on off duty life as well as specific spies and general information on life at the time and some rooms set up as they would have been for everyday people. 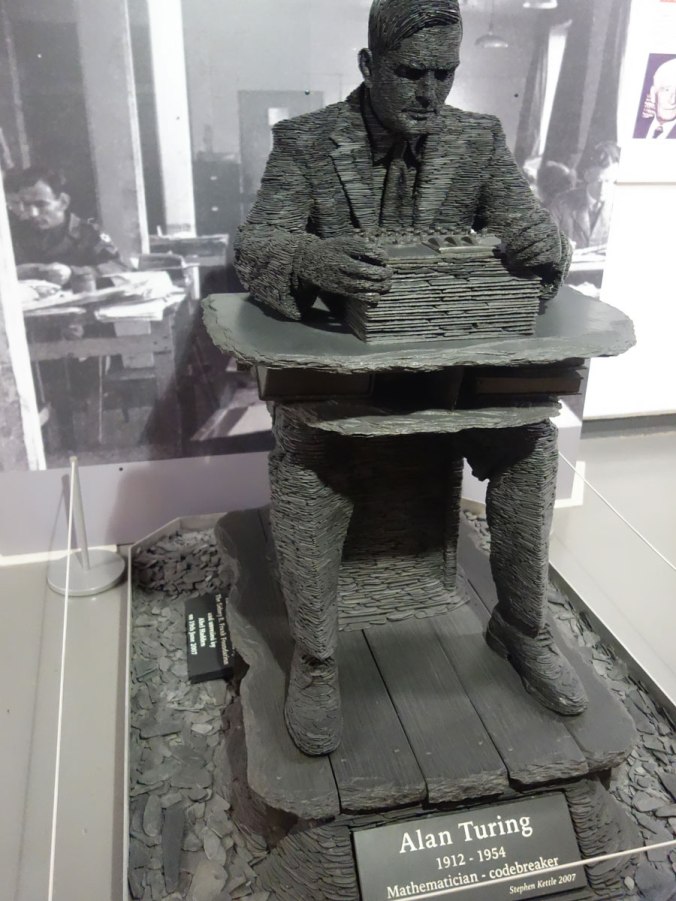 One of the most interesting exhibits for me was the small section on Alan Turing. Having studied the first computers and codebreaking in my degree, and having been interested in them before too, his name was one I already knew so reading some more on him and his life was interesting and tragic. He was the person who invented what is acknowledged as the original computer, at least the first that’s anything like we know them as now. They had a letter of apology from Gordon Brown, the Prime Minister in 2010, for how he was treated at the time. It’s one of those things that makes you realise how much life has changed and now he wouldn’t have had to have the hormone treatments because he was gay, he’d be able to live a normal life and may not have killed himself. 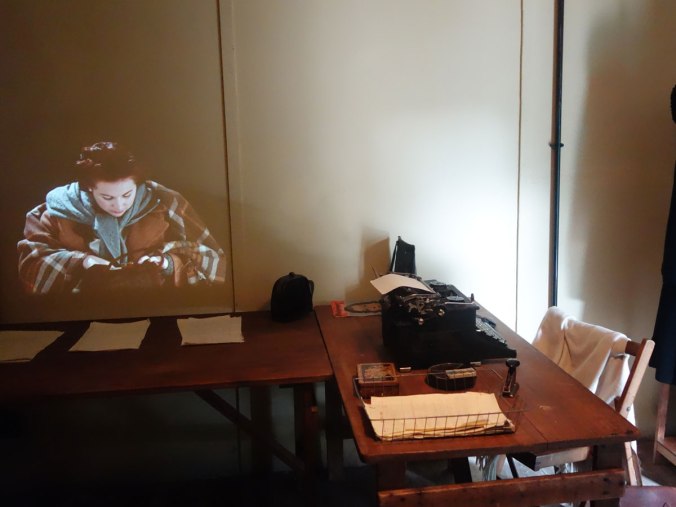 There were a couple of the huts set up as they were at the time. Although they were interesting to look at they were all pretty similar, which is fair enough as they were just offices where people worked, though it did include Alan Turing’s which was a bit different. They did have some interactive exhibits and videos in some rooms with information on specific things. I liked how they had projections of people who might have worked in the offices on the walls as if they were stood up or sat down behind the desks. They also had short conversations being played in as you entered each room so you could hear what might have been said which was a nice touch.

That was all we actually saw on the day, as I said we’re planning a second trip for the mansion, stable area and I think there are a couple of huts we didn’t visit. I was surprised at seeing the mansion on the other side of the lake, it didn’t feel like it fitted in with the rest of the buildings with them being so modern and small and this being so much more ornate and older. There were a lot of benches around and even deckchairs people were sat on around the lake which would have been nice to sit on on a truly sunny day. We did stop and have a snack, I’d taken one in my bag, but next time we’d probably go to the café or even the small snack shop place they have set up there as some of the ice creams sounded so good, not sure how a cola flavoured one would work but I’d be interested to try! 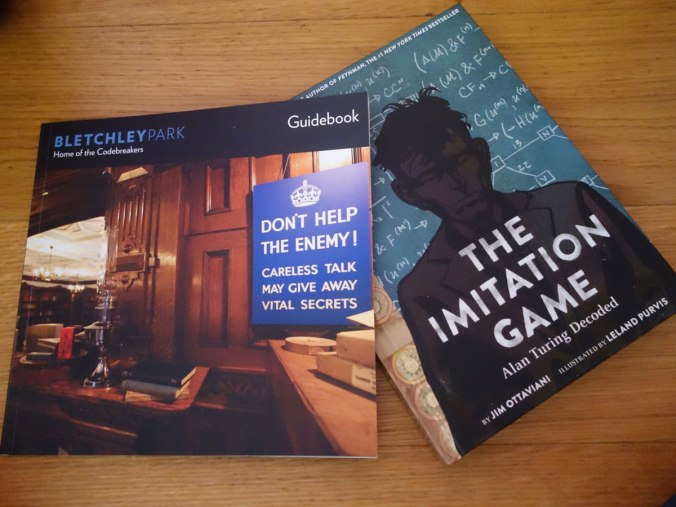 I can’t go anywhere and not buy a guide book, I have a bit of a collection, but I also got a book on Alan Turing. I was tempted by quite a few things in the gift shop, I’m a sucker for those places, but I was planning on getting something about him and I just really liked the art style in The Imitation Game Alan Turing Decoded illustrated version by Jim Ottoviani llustrated by Leland Purvis. Definitely looking forward to reading this. 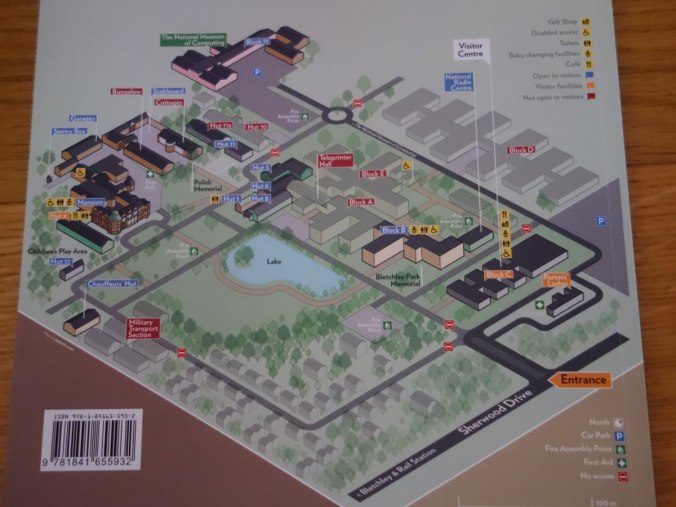 The map on the back of the guidebook

I am definitely looking forward to the next visit, it’ll probably be the beginning of next year, and I would recommend it as a place to visit if you’re interested in technology and its history even if you have no interest in history in general or the second world war as some of the machines there and the information is on the original computers. One thing I would say is, unless you want to spend a whole day there, then doing it in multiple trips is a great way of making sure you see everything without rushing it. Also I’d recommend going on a cooler day, the day we went it was quite warm and inside the restored huts it was so hot and stuffy so it’d be more enjoyable on a cooler day.

2 thoughts on “An Afternoon at Bletchley Park”