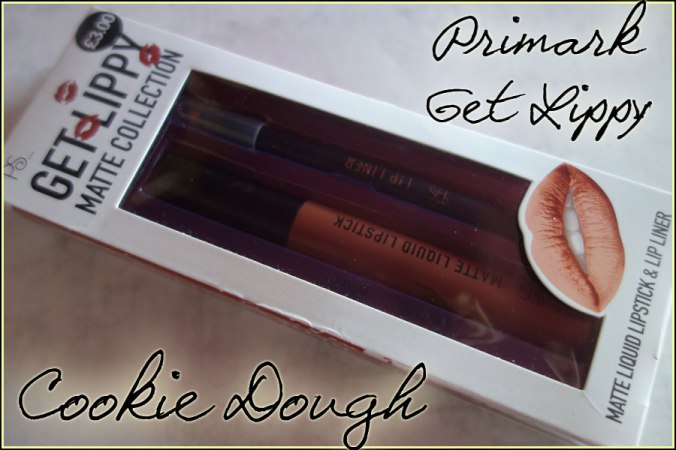 As I am currently in the search for a good, affordable liquid lipstick this may be one of many liquid lipstick reviews coming up. There will be other reviews in the middle but I realised today how many I have bought recently and I’ve actually been excited to try them all out and write the reviews for you guys. Today’s is one of the Primark Get Lippy Matte Lip Kits, one of the ones I’ve been looking out for the most and they finally had some in stock near me.

The one I have is in the colour Cookie Dough, which is a fairly light nude, it doesn’t add any extra light or dark to my natural lip colour really, just changed the colour of it, which is nice for an everyday look to me. These lip kits contain a lip liner and a matte liquid lipstick, as with most of the Kylie style dupes, and costs £3 which makes it the cheapest one I’ve bought. I fon’t think that either of the products is available individually, though as our local doesn’t have a great range of their own beauty line I’m not sure.

With these being the cheapest I was interested to see how they’d work, they seem to have either love or hate reviews and seem to vary from colour to colour so I was crossing my fingers I got a good one.

The outer packaging for these is nice enough looking, I quite like the design but the colours printed on it are very misleading, don’t rely on them at all when it comes to picking a colour. I do wish they’d gone down the Barry M route of small packaging that just fits the products in, though given the colour difference it would be impossible to guess what you were getting, as these feel a bit big and it’s just a load of rubbish it recycling. 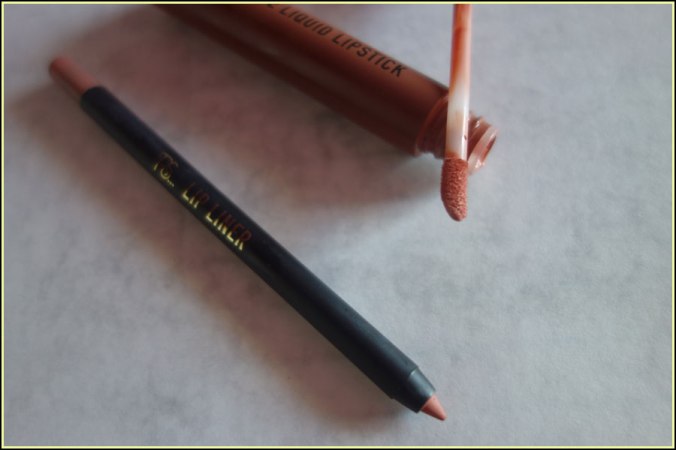 The products themselves are actually quite nice looking, to me anyway, the black with the parts in the colour the product is meant to be look nice. I think the lipstick could have done with a clear plastic bottom and then you’d see the colour but I do like the fact it won’t start to get messy looking when it’s half empty. The eyeliner is a standard eyeliner, it looks nice with the black but it’s just one you sharpen so it’s nothing special but, to me, looks more expensive dive than the price tag.

One problem I have with this lipstick is it seems to leak a clear liquid. I have no idea what it is but it was leaning when I opened it, I cleaned it off, and it’s leaked again since. I’m not sure if it’s because of the lid or how it’s leaking but I definitely don’t trust it loose in my bag. The doe foot applicator is quite nice, though the wand seems oddly long for some reason so it feels awkward to use. It is very easy to control though so I’m not complaining, it just takes some getting used to.

I feel like I should say about the colour of both before I go into each individually as the colour match between the two is excellent. It’s pretty much spot on and you can’t see any colour difference where the lipliner and lipstick meet in your lips if you don’t quite go up to it. However, the colour of the product does not match anything in the packaging. The two colours in the box are very different to each other, with a darker brown around the edges and a very light colour in the lip picture and the actual colour is somewhere in between. Also the colour of the tube is way off, the only way to tell the colour if the product your getting is to check the tip of the pencil, which can be hard to tell in the store. 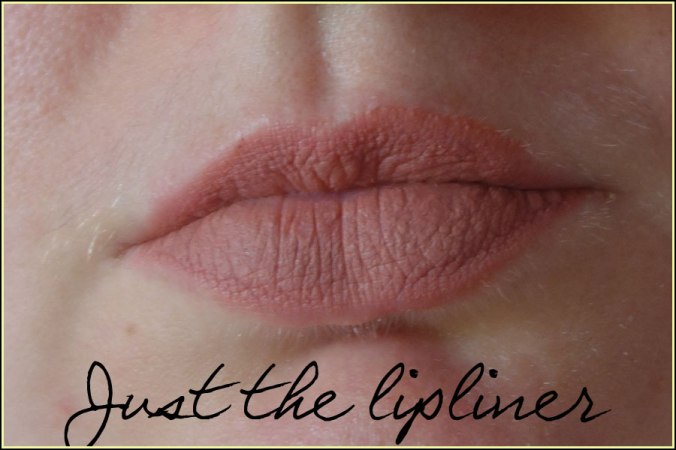 The lipliner is actually ok. It’s not the best I’ve tried but is actually quite smooth and soft feeling once you’ve taken off the top layer. When I first got it felt so hard and dry but after scribbling on my hand it softened up a lot. It applies fairly evenly and thinly but it feels slightly waxy as I apply it. It doesn’t dry my lips out but it almost feels like it never completely sets. I know some lipliner you can get away with wearing in their own or using to contour, this one came off on the first thing I ate or drank so this is not one of them.

The lipstick formula is very thin, though it applies fairly evenly it’s not one to just swipe the wand over and leave, I had to do a bit of touching up where it was a bit thinner or it had moved. It does take a while to set but it’s not the longest matte lipstick I’ve got in that way. When it is setting, and for the first fifteen minutes after, you do have to be a bit careful as it seemed to fade off very easily at that point. Beyond then, however, it actually stayed ok. It survived drinks but didn’t do so well in food.

The formula for this doesn’t leave me reaching for the lip balm after ten minutes, it didn’t feel drying at all, so I was very surprised when I looked in the mirror and it seemed to have almost shrunk my lips and made any lines way more obvious. That seemed to disappear after about 30 to 45 minutes, or after I rubbed my lips a bit, every time I tried it so I have no idea why it happened. I did find that, especially to start with, it left my lips feeling dry if they rubbed against each other, almost papery, which is an odd feeling. This did seem to disappear as well but, while that feeling was there, it seemed to come off in little rolls when I did rub my lips together. These aren’t obvious to other people but they feel odd and there’s no loss of pigmentation.

As far as staying power goes these are decent enough. They don’t have the longevity of some I’ve tried but to be honest, if be a bit annoyed if Primark could make some that cost £3 and lasted as well as a Kat Von D that cost considerably more. I think it’s a case of you get what you pay for. It will last three hours if it’s just drinking but when you start in food it’s goodbye lip colour. Although it didn’t really transfer much on things like food and drink to leave a mark it did leave a light orangey mark on my fingers or on tissue if I rubbed it, like a powdery transfer rather than removing any colour from my lips.

I tried using the two together and saw no benefit at all compared to just the lipstick. I guess maybe the first few bites of food or when it started fading it stayed looking better because as the lipstick faded the lipliner was underneath but as soon as that touched food it was gone quicker than the lipstick.

Basically the Cookie Dough Matte Lip Kit is a decent kit for the price when you think it’s two products for £3 so maybe £1.50 each. It’s nothing amazing and won’t last all day without reapplying but it’s a nice enough product if you want matte lips on a budget for a night out. One thing I’d say is I don’t think the lipliner adds anything so I probably won’t be using it if I use the lipstick in the future. Maybe if you had two different colours for contouring your lips there’d be a difference but I’d rather touch up the lipstick to start with to get it even as it’s easier and stays just as well.

Also, ignore the colours on the packaging and find swatches online so you know what colours you’re going for. I came home expecting a darker, brown toned nude and instead got a lighter one with a more orangey base to it. It’s a nice colour but not what I was expecting and I know how disappointing it can be to get a product hoem and realise it’s either a colour you don’t want or one you already have ten of!

I know these seem to get mixed reviews, have you guys tried them? Was it the same colour or a different one? I have to say I was pleasantly surprised with this one going into it having read other reviews but I had to try it for myself and I’m happy I did, even if it doesn’t necessarily become my go to lip colour.