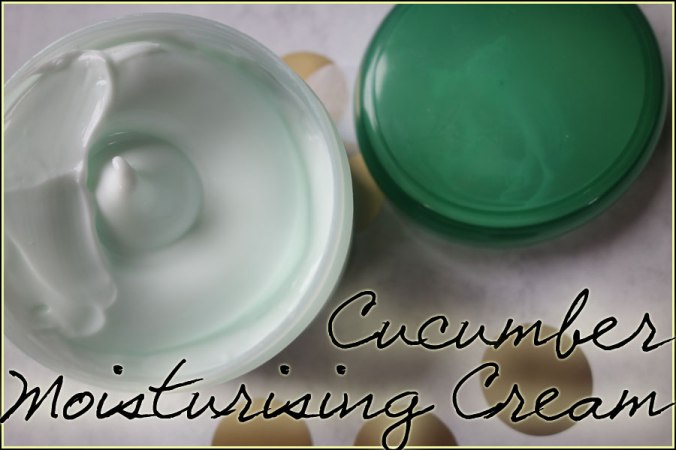 This Cucumber Moisturising Cream is part of the Boots Essentials range. It comes in a 100ml tub and costs £1.50 so it’s very much a budget beauty product. Although it’s cheap and cheerful and not the best looking pot out there it’s one that I’ve used in the past and thought was discontinued so when I saw a post on some other products in the range on Mrs Strawberry Blonde’s blog I had to give it a go and see if it was as good as I remembered.

It claims to be soothing with cucumber and vitamins and is suitable as both a day and night cream. It’s definitely on the thick side for a cream and I was recommended it years ago when one of the medications we tried for my skin made it dry and cracked and it was one of the few that had an effect so I was definitely expecting it to be really moisturising and calming.

As I said, it’s definitely got the cheap look about it, you won’t be coming fusing it with a high end brand, but it also isn’t pretending to be either. It’s a simple.design and stands out from the others in my skincare stash. The lid stays on well and I’ve not had any leaks when I’ve taken it away with me so I trust it in my bag. It is slightly annoying if you have greasy hands as it has a smooth and shiny finish which can be hard to grip, especially if you’ve kept it tightly closed.

Scent wise it’s a nice, fresh scent. It definitely has the smell of a lot of cucumber products, though it does smell like fresh cucumber rather than the more plastic scent you often get. It does linger for a while which may be a problem if you don’t like heavily perfumed products on your face or your skin can’t take it. It isn’t an overly perfumed scent but it’s there and noticeable for maybe ten minutes after before it fades.

The cream itself is definitely thick, it’s the kind that you see your finger marks in many uses later, though it seems to almost melt when it makes contact with your skin and become more watery. It spreads evenly and you really don’t need much to cover your face, this tub is going to last me a long time. It does take a while to sink in, maybe five minutes before it was fully sink in, and it left my skin feeling really moisturised. It didn’t leave a film or greasy feeling but you do have that slightly tacky feeling you get with some really rich mositurisers. It actually works pretty well as a base for makeup, cream more than powder as it seemed to stick to the powder in patches. The moisturised feeling lasts well, all through the day.

My skin is dry, especially in parts, and sensitive though also acne prone so I do have to be careful with the richer creams. I found that this one is too rich for me in the day but works really well as a night cream. After a few days I had a breakout using it in the morning but it seems fine for the night. I think if you have very dry skin this might be a good one for you to try, it’s definitely soothing and cooling for sensitive skin. I used to find it good when my skin was very dry and it’s exactly as I remember it in that way. 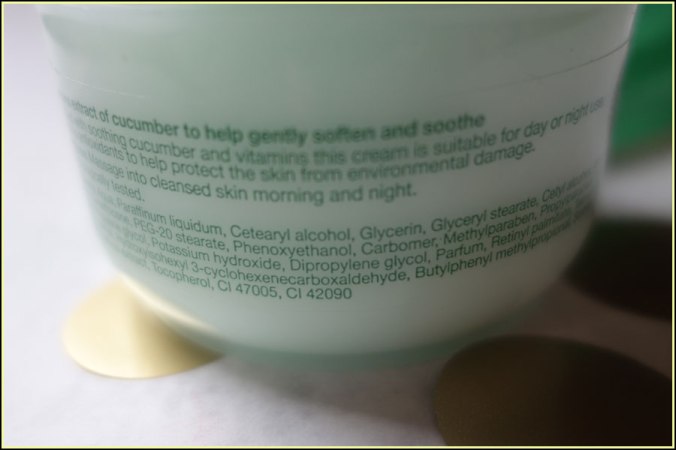 The ingredients, or some of them

I think, especially for the price, this is a great mositurisers for dry skin, especially if it’s sensitive. It’s not going to be so good for combination skin unless you’re very specific where you apply it and it may even be a bit much for normal skin, it depends on how prone to breakouts you are. It’s one I’d stay clear of if you have oily skin.

I think this is a good night cream, as a day cream it’s a bit rich, but I would definitely recommend it if you’re in the lookout for a budget skincare range. They also do a general essentials line in blue, I think this is the one aimed at soothing and that’s a more general cream. I haven’t tried that one but I might give it a go next.