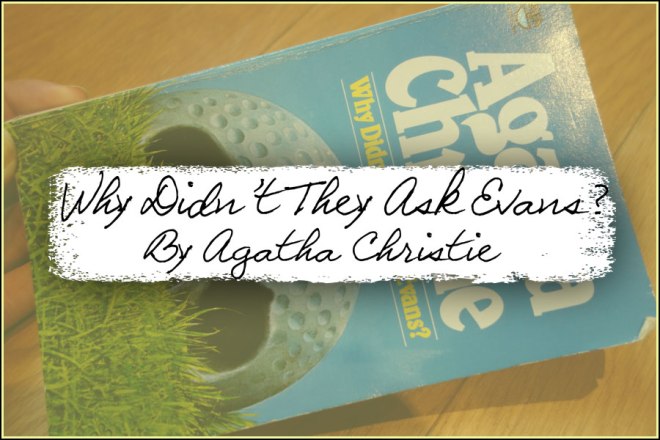 Title: Why Didn’t They Ask Evans?

My detective book summer has continued with another crime novel from Agatha Christie, though this time not a Poirot mystery. Why Didn’t they Ask Evans? Is about Bobby Jones, who witnesses someone die, though he is unaware at the time it’s a murder as he thinks he fell off a cliff, but as it’s an Agatha Christie it couldn’t be that simple. It is set in the early twentieth century, I can’t remember a date being mentioned but as it was originally written in 1934 I would assume around then, and is a quiet country setting as with a lot of her books, that hides a story of murder with twists and turns.

This book has been sat in my parents bookshelf so I thought, having enjoyed the other Agatha Christies I’ve read recently, I’d give it a go. It was adapted into a Miss Marple story fairly recently for TV so it may be familiar if you watch the ITV dramas but it’s not originally one of that series. I have to say I didn’t remember the storyline from the TV series so it was like reading it without any previous knowledge which was a bit of a change from the others. 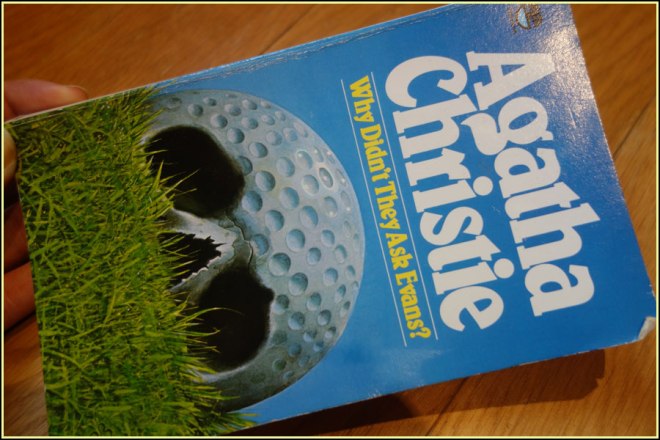 I’ll start with the cover and say I quite like it. This style isn’t my favourite of the Agatha Christies I’ve read recently but I do like the way they’ve mixed the gold ball and the skull and it definitely goes with the story. It does have the feel of the airport books you get, with the bright white font and the style of the art on the front to me, but it looks good on the shelf and the white spine means it fits in with many Agatha Christie collection of paperbacks from around the time even if the cover art is a different style. This is one of the books from a series by Fontana who have published different series of Agatha Christie with a range of covers in paperback, all this same standard size so they fit well together.

The layout of this is the same as with a lot of books at the time. It’s not something I noticed growing up as so many of the books I read were older from my parents, but they seem to have chosen to separate the chapters on the same page. There’s no break if the previous chapter finishes half way down the page, you get the new chapter number but no blank space like with most modern publications. This may take a bit of getting used to but it actually makes it flow more to me, that may be because I grew up with this style though. The chapters are also fairly short, which does make it a fairly good book when it comes to picking it up, reading a bit and coming to a natural break and then putting it down. 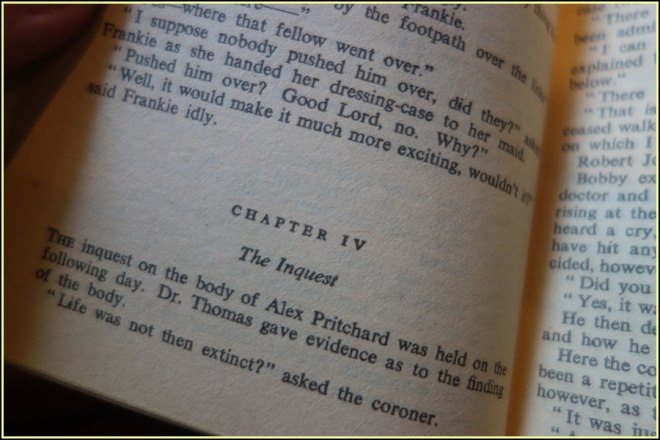 The story itself has a lot of twists and turns in it, you see it all from the point of view of Bobby Jones, who is naive and a bit dim at times but does serve as the one to ask the questions for the reader. You also have his childhood friend Frankie, a woman with plenty of money and time on her hands who seems to want to bring Bobby out of his comfort zone and show him that the world isn’t great all the time. Although they do follow a similar method to a lot of Agatha Christie’s other stories they seem a lot more amateurish than most of the regular characters and seem to get in over their head with this story that seems to have a lot of characters lying and you’re not quire who to believe when it comes to the later part when Bobby and Frankie get into the proper investigating. Though it does take Bobby longer to realise there’s something odd than the reader, especially given the fact it is a crime book, which can be a bit frustrating but I suppose does set up the character and how trusting he is of everyone and how he takes things at face value.

As with the cover art this isn’t my favourite Agatha Christie story. There are some things that seemed to slow it down. In the beginning the little side notes from the point of view of the characters, for example the difference in opinions of two generations on each other and how they live their lives or they see the conversation, is a nice touch that adds charm and a bit of depth but, as the story goes on, to me they seemed to get in a the way a bit and just add what wasn’t needed. Also, although I do like backstory for characters and finding out more about them the beginning of the book seemed to be all about back story and I’m not sure how some of it actually fit into the later story. It started quickly but then seemed to slow down and took a while to get going again. 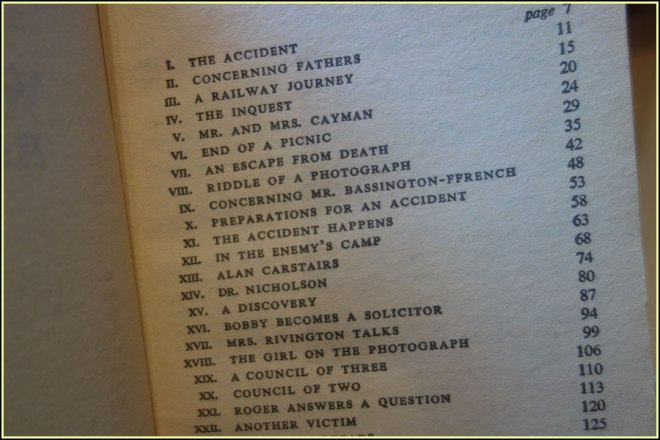 The ending does tie together all the loose ends in true Christie style and some of the smaller details mentioned earlier in the story do make sense when it’s all explained but it does seem a bit like there might be too many layers to it. Maybe it’s just me but I found it hard to understand why some bits were needed, no spoilers so don’t worry I won’t say what, but I guess it does all add up. I think maybe that’s the problem with it, it doesn’t leave me satisfied that it works, it has that ‘I guess it makes sense’ feeling rather than that ‘of course’ moment you get in a lot of her books. 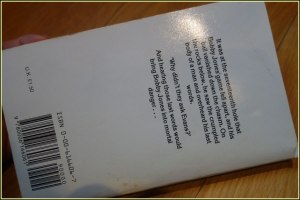 At the end of the day it was a nice enough book, if I had a star rating I’d probably put it in the middle of the road with a five or six out of ten rather than the normal 8 or 9. It didn’t grab me and make it hard for me to put it down like past ones, I actually ended up almost giving up on it a few times. I wouldn’t recommend this as a first Agatha Christie book to read, maybe for existing fans it’s worth picking up but otherwise it’s not a good introduction to her work. If you want to pick it up it’s easy to find second hand for cheap and I think it’s one that a lot of libraries will have, if not it’ll be easy for them to get.

2 thoughts on “Book Review: Why Didn’t They Ask Evans? by Agatha Christie”