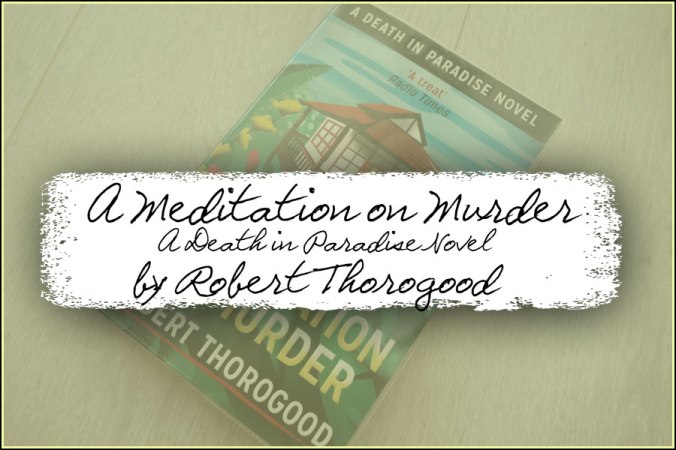 Title: A Meditation on Murder

Until a recent trip to the library I didn’t even know that there were books based on the Death in Paradise TV show from the BBC. As it’s one I love and I’m on a bit of a detective novels kick at the moment I thought I’d give it a go. It’s also the perfect book for the recent heat here in the UK, with its setting of Saint-Marie, a fictional island in the Caribbean. After a bit of a look online it turns out A Meditation on Murder was the first Death in Paradise novel so it’s a great one to start with.

I was interested, going into this, to see how close it comes to the actual TV series and characters, also which of the characters it was written about as there have been a few combinations over the series. Being written by the creator of the show, Robert Thorogood, I was hoping it would be close and, to me, it doesn’t disappoint.

I really like the cover of this book, it has a minimalist stylised feel that reminds me a lot of Poirot TV shows and yet has the bright colours and plants that make it stand out and fits with the Caribbean setting. The back doesn’t have a blurb, that’s on one of the inside pages, but it carries on with the look of thee front and includes some photos of the characters as played by the actors on the TV series. I like this, it ties it in with the TV series and also means that people unfamiliar with it could see the main characters. Of course they could imagine them completely differently, that’s one of the great things about books, but it’s a nice touch to me. Also they don’t take up a huge amount of space or take away from the design of the artwork itself.

If you’re unfamiliar with the show I would definitely recommend checking it out if your a fan of light detective dramas with twists and turns and the stereotypical Agatha Christie get everyone in the same room and say why everyone could, or couldn’t, have done it, stories. It’s all set in the Caribbean and has a very British sense of humour in a lot of ways and does make fun of a lot of British stereotypes and how our of place they’d be in the relaxed atmosphere of the Caribbean.

Although there have been a few combinations of characters for the TV series A Meditation on Murder is based on the original characters and says it is set a year after the first episode as that’s when Richard Poole arrived. Detective Richard Poole is the senior police officer in the station, who is a British police officer brought out to solve the murder of the previous officer and stuck on the island against his own choice. He’s awakward always wears suits, wants tea and doesn’t understand how the people in the island are so relaxed. Dwayne Myers is the longest serving officer and the kind of policeman who can find anything through legal, or less legal, means and knows everyone on the island. Seegeant Fidel Best is the youngest officer and innocent and eager to please but doesn’t always know when to drop a subject. The final police officer is sergeant Camille Bordey who is the opposite of Richard in every way. Part of why the book, and TV series, works is the chemistry between these characters, the way they play off each other and each has their strengths and weakness which they acknowledge. I think this is carried through into the book really well, you can almost hear the characters saying them in the voices of the actors, which I think is a good thing. 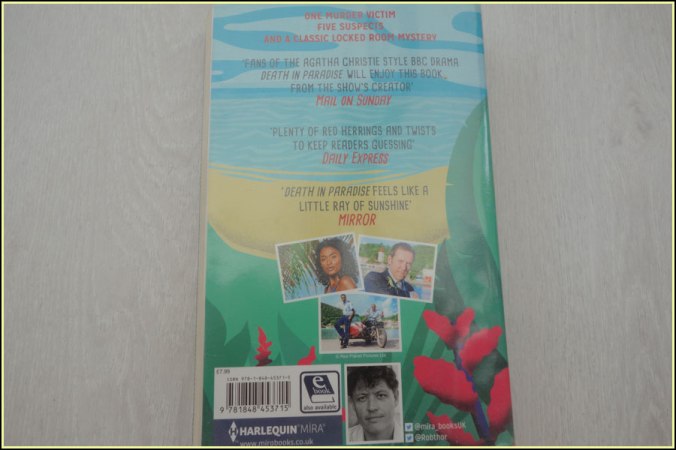 The book itself is written in a very light tone, it doesn’t take itself too seriously and some of the internal monologues and thoughts of the characters do add some comedy at times. It also doesn’t rely on the reader being familiar with the TV series, there are references to things like why Richard is there but it explains it itself and describes the settings enough that if you have no previous knowledge of the TV series you could still imagine it and follow what’s happening. I really like the way characters are described, most of the time the suspects and others involved in the case are described from the point of view if the various characters with their opinions on them rather than just a description of what they look or act like.

The story itself is a standalone, like an individual episode it can be read by istelf, it also isn’t an episode turned into a book so it’s a completely new story. It’s a classic locked door murder mystery and you follow the deductions as the characters go along. There isn’t too much of the hidden thoughts you get in some stories where you have no idea what the characters is thinking or how they got there, you can see it as it’s being worked out until the very end with the final pieces that lead to the murderer being exposed.
I think it’s well written and works well as a story; you get to the end feeling like there’s a proper conclusion and it makes sense. I’d say it’s one of those books for teenage and above, there’s nothing really graphic but to me the TV show is probably aimed at that age and this book fits with that. It’s not the longest read, with the flow of the text I found that it took three days with a couple of hours a day to finish and it’s one of those books I kept wanting to read more when I meant to put it down so that’s always a good sign for me.

If you’re a fan of the show this is definitely worth a read, if you have no idea what the show is but like Agatha Christie style novels then it’s worth a read too. I’d say if that’s the case it’s also worth checking out the TV show if you can get it in your country. I’m going to be on the lookout for the second book and see if they have the third in the library when it’s released.

One thought on “Book Review: A Meditation on Murder (A Death in Paradise Novel) by Robert Thorogood”