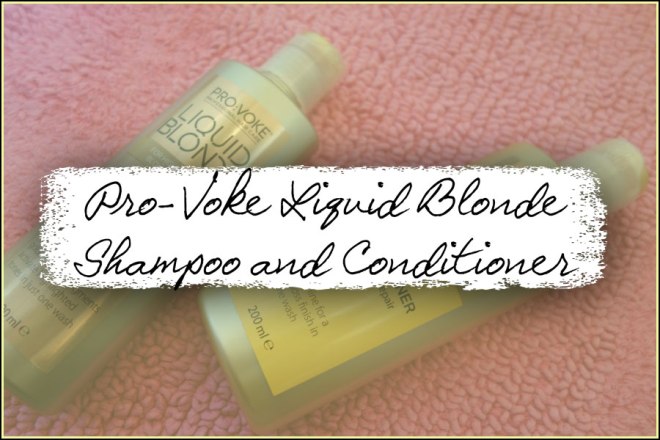 For the past few years I’ve had my hair blonde, though mainly through lighteners rather than actual dye, and the recent heat wave in the UK and all the sun naturally turned my sort of ashy blonde hair to a very light, skin out white, blonde without me doing anything. I recently found the Pro-Voke Liquid Blonde Colour Activating Treatment Shampoo and Intense Shine Conditioner in Tesco so thought I’d give them a go. I haven’t seen these around before, they said they were new on the shelf too, and as I was planning on using dye to make my hair less of a white blonde and a more golden tone I thought this would be worth a try. I loved their purple based toner for white and platinum blonde hair when I had it before, definitely recommend that if you want to get rid of any brassiness in your hair, so I had high hopes for these too.

These bottles are larger than the intense versions of the purple toner I’d used before but the same size as their everyday ones at 200ml. They cost £5.50 each which isn’t too bad for a shampoo or conditioner, especially as going from past experience with their other products a little goes a long way with them so they do last better than some cheaper shampoos I’ve used.

The bottle for these is pretty standard, it’s easy to tell them apart from their other products because of the golden yellow label and the fact that the bottle itself is semi translucent in a way, though it’s more on the opaque side with a gold tint. It has a sort of frosted finish which means you can see how much is left but it’s less harsh than a plain clear one.

The flip top lid is easy to use but it does have the same problem for me as with the purple toner in that it tends to make a mess if you’re not careful. It leaves some product around the rim and builds up over time if you don’t hols I’d under the shower closed after every wash. It’s not much extra and does save you from getting the blonde shampoo on things, the conditioner isn’t as bad but I think it’s because it’s a thicker product and has less of the pigmentation in it.

I’ve never used one of these ones meant to bring out the blonde before so was surprised at how pigmented the shampoo is. It’s very golden and has a shimmery look to it, it’s a lot darker than I expected having seen some others in the past. The way these work is to have a small amount of pigmentation like dye in them, you leave out to sit for a while and it’s a bit like dying your hair but supposedly less permanent and just gives it a boost of whatever colour your going for. I say supposedly because this one does not want to come out of my hair! Then again semi permanent dyes have been permanent on mine so maybe it just likes to hold onto colour, just something worth knowing if your hair is similar.

The shampoo does lather well, even when my hair really needed a wash and would often need a second shampoo it still created lather with less shampoo than I’d normally use. The lather itself is a golden yellow and can stain so make sure you rinse off anywhere you notice it’s settled. It’s the kind of shampoo that feels like it’s really cleaning your hair and leaves it with that squeaky clean feeling. I’m not a fan of that feeling but I always have to use conditioner anyway which gets rid of it but I can see this one being a shampoo that could dry your hair out if you don’t use a pretty moisturising conditioner.

The conditioner is really nice, I’d probably use it on its own anyway, and is much less pigmented than the shampoo. It’s a pretty thick consistency and reminds me of some hair masks I’ve used or intense conditioners. I left it on s it says and my hair felt really nice and soft afterwards. It does weigh my hair down, which is what I like in a donciritoner due to how thick and frizzy my hair is otherwise, but if you have thinner hair it might be a bit too much.

Onto the colouring effect, which was definitely more noticeable than I expected it to be. I took a before and after photo but it’s not showing the difference as much as there is in person. It definitely gives a more yellow tone, and not necessarily in that golden warm kind of way. My hair was probably lighter than you’d want it to be for this as it just gave it a yellow tint, if yo have a more golden blonde hpcolour already then I can see this working really well to give it a bit of a boost between dyes or just to boost your natural golden tones.

One thing to know about this, at least that I found, is that once it’s been used and dyed your hair it doesn’t really want to budge and it’s pretty much impossible to get rid of that yellower tone in your hair. It may also be because of my hair type and colour but I don’t often have a problem with yellow tones showing up in my hair. I’ve tried various shampoos, including head and shoulders which my hair doesn’t like but is known for stripping colour, just to see whether it would go and it didn’t. I also used their own purple toned products and it’s not really made a difference. I don’t mind the colour and my hair will take pretty much anything you throw at it and stay in good condition so I thought I’d try it just to see what happened.

Overall I think this product did what it’s supposed to, it’s just not necessarily what I was hoping it would, if you already have a golden toned blonde then I see it working really well at giving that boost if it gets a bit dull but it’s not one to add golden tones to your haifpr if you don’t already have them, at least if your hair’s a light blonde to start with. If I ever dye my hair a more golden blonde I’ll use this shampoo and the conditioner really gets on with my hair so I’ll be using that anyway but I won’t be repurchasing this otherwise. At £5.50 it’s cheaper than a lot of these type products I’ve seen around so worth a try if it sounds like it’s the effect you’re looking for.