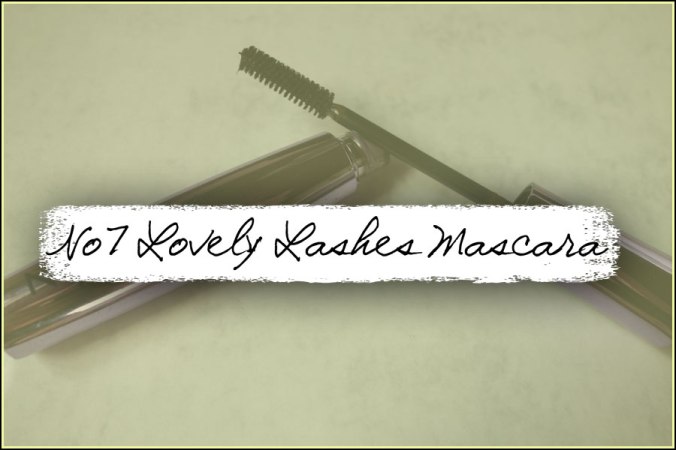 Late last week I made an order for a couple of No7 mascaras, one of them being the Lovely Lashes mascara in brown/black (£13). I haven’t tried this one yet and wanted to give it a go, I’ve liked a lot of the No7 mascaras I’ve tried and like the brown/black colour as it’s a bit softer than the black but dark enough to still stand out more than a lighter brown.

This mascara claims glossy, natural volume with argan oil in the formula that helps to nourish and condition the lashes too so I was interested to see how it would turn out and if it would help improve the condition of my lashes. I tend to go for a more natural looking mascara so mascaras that add definition or length over volume but I’ve also found that a lot of the mascaras promising volume need a couple of coats to have a real boost of volume. I was more interested in the glossy finish and nourishing properties this formula is meant to have. 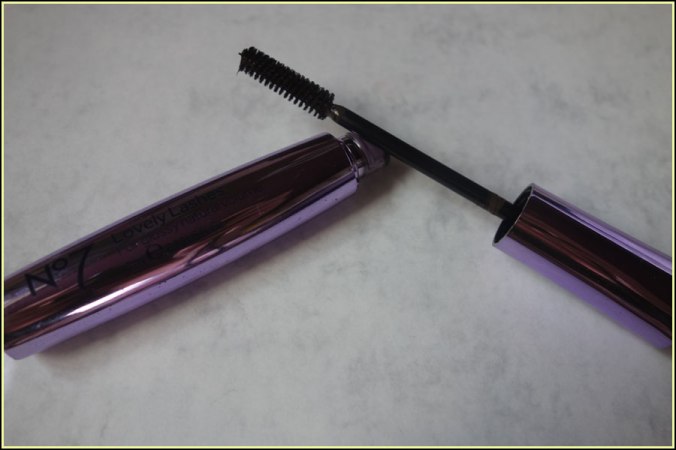 One problem I have with all, or almost all, No7 products is how easily they attract fingerprints. It’s not much of a problem for me as I keep my mascaras in a drawer rather than out on the side but is is a bit of a pit considering how pretty the colour is with this tube. I really like the colour of this mascara tube, which feels an odd thing to say, but the light purple metallic look is pretty and stands out amongst the others I have so it’s easy to identify even with the writing being hard to read. For some reason the black writing on the light purple seems to disappear.

The tube itself is a long, thin design like a lot of No7 mascaras, though I do prefer the shorter wand of the Extravagant Volume when it comes to control. The handle of this is easy to hold, the shape means it’s comfortable and easy to control when you’re used to it. The brush is the fibre bristle style, though these do seem to coat my lashes better than some of the same style I have tried in the past. The bristles are supposed to be softer so maybe that has something to do with it, they do seem flexible and work well on both top and bottom lashes without putting too much product on either.

The formula for this product is really nice. It coats the lashes and lengthens them slightly, one coat is enough to coat the lashes and add a bit of colour without sticking the lashes together. The second coat I tried does add to this, the lashes still remain defined but there’s a definite increase in the volume of each lash with the second coat.

As far as longevity goes I wore this mascara, one coat, for twelve hours on a warm, sticky day and even with my eyes watering a bit because if pollen it remained in place, very little melting on the bottom lashes which is a problem I often have. I found that there was a tiny amount if flaking, not much noticeable at all and it came off as literally a thin tube from around a couple of lashes but not enough to be obviously missing.

After 12 hours of wear on a hot day, a bit of mascara flaking under my eye but not much

This mascara didn’t have any claims when it comes to waterproof, however I normally test it anyway. I already knew it survived sweating and a bit of eye watering but I also tried splashing it. A small amount of water it was fine, if anything a bit more flaking but no melting and running, even a short shower it mostly stayed on so I think rain would be fine. More than a bit of splashing and it did start to come off more, though still more flakes rather than full on streaks, but it was more noticeable and I wouldn’t recommend it for any activity you expect it to get wet like a beach or swimming in general.

In general I really like this mascara, I think it may have become a favourite and go to product for when I don’t need a waterproof mascara. As far as nourishing effects I can’t really tell yet. In the shirt term my lashes feel more flexible and less brittle but that may be wishful thinking. I think it would need a more long term regular use for any real difference.

If you like a natural looking mascara and £13 is within your budget this is worth checking out. As well as the brown/black that I have chosen it is also available in plain black, though there isn’t a waterproof option for this mascara which is a bit disappointing.