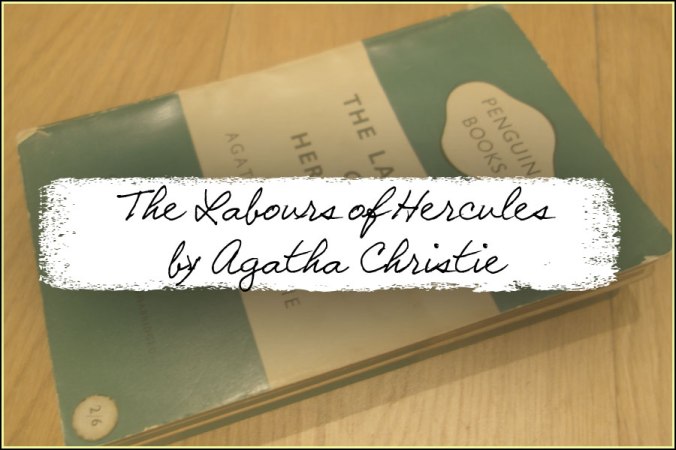 Another Agatha Christie book, this is from a series of ten that Penguin published that she chose herself as favourites. I already reviewed Death on the Nile, another from this series, and this has the same green cover that the Penguin Crime books do. It’s The Labours of Hercules by Agatha Christie, a book of twelve short stories about Hercule Poirot. Each one is inspired by one of the Labours of Hercules, the classic book about the Greek myths of Hercules.

This edition was published in 1955 (it’s the reprint, he original Penguin was in 1953) but as it’s one of the more well known Agatha Christie books and part of the Poirot series it has been published many times over the years. Hercule Poirot is one of Agatha Christie’s more famous characters and there are TV adaptations of all of the stories, though I don’t remember all of these being made. Each of the stories is short, ranging from around 15 to 30 pages, and covers a wide range of mysteries from dog kidnapping to murder.

These Penguin covers are classic and well recognised with their colour coding depending on genre. This does mean that having a bookshelf of crime books even by different authors will go well together. They’re a standard size for paperback books and have a clear, easy to read font. These are a good size book to have in your bag as it’s fairly thin as well so not too bulky if you wanted to pick it up and read it on a journey.

One thing I like a out this particular publication of it, it may be in others too but I think it’s a Penguin exclusive, is the short, one page, foreword written by Agatha Christie herself explaining about how the book was written. I also like the few paragraphs on the back of the book that give a bit of her history and why she wrote. Though it is nice to have a bit of a blurb to know what the story us about I do enjoy these little extras and this way of doing it doesn’t eat into the story or feel like you’re getting g extra padding or something just to fill pages. 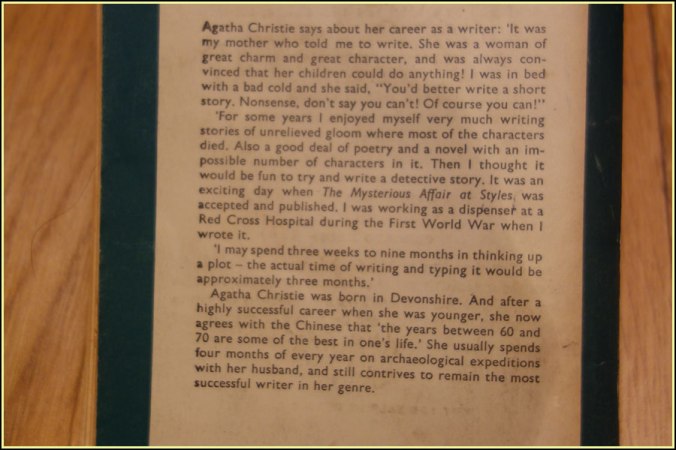 The theme behind the twelve stories, and the thing that ties them all together, is the idea that Poirot is planning on retiring and look after marrows and wants to have e twleve final cases as a sort of send off. Cases that are remarkable somehow and interesting to him. That is a great way of leading you into this range of crimes, all completley​ different but unusual in some way and with some kind of link to the story of the same name in Greek mythology.

The stories are all based on the twelve labours of Hercules in Greek mythology, though some more literally linked to the particular title than others. There is definitely a large range of themes and crimes and, in general, these seem to be more modern crimes than a lot in the Poirot series. There’s no quiet village in these stories, though the kidnap and ransom of a small dog isn’t exactly a violent crime but there are others involving drugs, murders, cults and politicians. They each have a twist, a way for the story to come together at the end in an unexpected way that does actually make sense and turns out to be logical. As they are short there isn’t as much depth as with a standard Agatha Christie, there isn’t the room for it, but they have the Christie feel and logic to them and all of the characters are believable and have depth in the short time we are introduced to them.

Although this book was written in the 1940s and first published in 1947 by Collins there’s something about these stories that seems more modern than a lot of Agatha Christie’s books. Although you don’t have the technology of phones or computers the crimes themselves have a more modern feel. I think it’s more the fact that I think of these themes, drugs and politics or cults and nightclubs as more modern than the standard country house or classic London street murder. They’re the kind of stories that could be written about today and have aged well and remain relevant themes more than some murder mysteries from the first half of the twentieth century. Those are nice to read in a nostalgia way, even if we weren’t there, but a lot are almost too cosy to feel as relevant.

The writing style is definitely Agatha Christie and the way the characters speak show it’s not a modern book but it’s nothing too jarring or over the top. It’s a fairly quick read and the factors broken up into these twelve completely separate stories means you can sit down and read one, you could even jump around with the story order if you want as there’s no uunderlying​ story that runs through, in a fairly short space of time.

But the individual stories look more like chapters in modern books

I think this is a great book as an introduction to Poirot, and Agatha Christie in general, as it manages to get the character across well without it being the first in a series and you learn quite a bit about his characteristics and how he thinks through his cases. Although it is late into her Poirot writing it doesn’t need the earlier stories for these to make sense. It also has a great range of problems and how much humour is in the stories, some are more serious than others, but still has the charm of an Agatha Christie novel even in the brutal murder cases.

I think it’s suitable for teenage readers, though it would depend on the person, as the things that would probably determine the suitability are probably mainly the drug and cult references. There are murders, one of them being rather brutal, but they’re never really described much beyond the basic facts on how they died, rather than detailing the wounds or how it would have happened.

This is the kind of book you can end up reading and getting lost in, or I did anyway. It is well written and flows well. It may be helped by the fact the stories are so short but it gets into the actual story quickly rather than having a slow start. I would definitely recommend this to fans of more gentle detective novels, though I would recommend Agatha Christie in general if you like this genre, but this book especially works for me. A bit like the short stories for Sherlock Holmes I often find easier to read and sometimes more satisfying than the longer ones.

Title: The Labours of Hercules