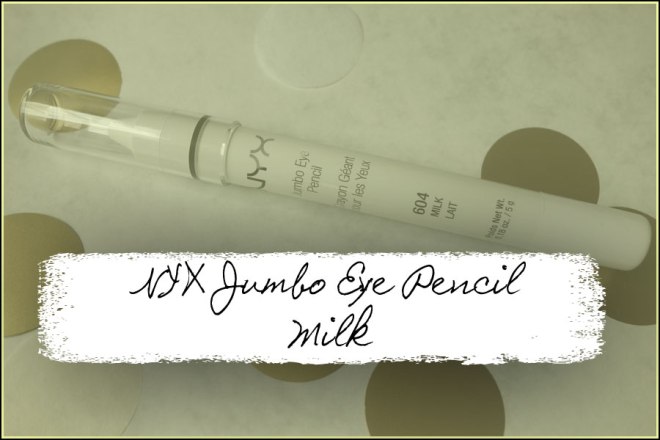 When I did a recent Boots order and realised that they sold NYX this Jumbo Eye Pencil in Milk (604) was the first thing I had to find. These are available in a range of colours and are a pencil style eye colour, as the name says, but I’ve seen Milk on YouTubers’ videos for years as an eye base. As it’s only £5.50 for the 12g pencil and I have been trying brighter colours I wanted to give this a go and see if it really made much of a difference to the way the eyeshadow turned out and how well it actually worked as a base. I’ve tried a few eye colour pencils before and none of them would be a formula I’d consider suitable for using as an eyeshadow base so I wanted to see how this one was different.

I can’t believe I’ve waited so long to try this. It may sound weird, especially if you’re in the US, as I’ve had this on my wish list for years. I’ve been watching Xsparkage videos for ages and she always seemed to use this as an eyeshadow base so, seeing the price of it in America, I wanted to give it a go but I couldn’t find it in the UK at the time. Fairly recently Boots started stocking NYX products so, of course, I had to add this to my basket when I did a points order. 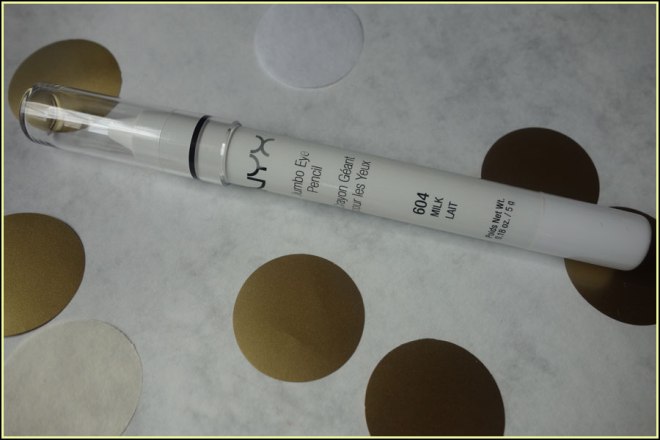 For lips and eyeliners I like pencil products but I’ve never got on with similar eyeshadow pencils, I don’t know why as they seem like a very convenient product type to have in your bag and you just sharpen them as they wear down and you’re good to go. This eye pencil has the standard looking packaging but it’s all white, which I tend to find cheap looking a lot of the time but for some reason it works for this. Maybe it’s because the product itself is white, though I know all Jumbo Eye Pencils have the white no matter what colour they are. The lid stays on this really well, it sits in the right place so you won’t get it all smashed in the end of it but also holds on well so it won’t fall off in your bag. The pencil handle itself is a good thickness to hold and use and it’s very easy to get a precise edge if you want it.

The formula for the product is really nice, it’s thick and creamy and you can apply it as thin or thick as you like as it builds up well. It’s soft enough that you can cover your eye with a fairly small amount if you don’t want a bright white finish as it blends out well. It does benefit from something setting it as I found it does stay a bit sticky otherwise and can move a bit but it doesn’t crease or fade much on its own and works well without a primer as a colour by itself.

It does work well as a base, it stays pretty tacky for a while but the thicker you apply it the less you can blend the colours you use on top. In the swatch I did it very thick to show how bright you can make eyeshadows and how it actually helps some that disappear in a standard primer or directly on my skin. This does make them stand out more but the loose pigments work better on a thinner coating and eyeshadows with a duochrome or shift finish seem to work better like that too as the base colour sticks in one spot but the rest moves around it or it just doesn’t show the duochrome effect as well. As a base it did keep my eyeshadow on for longer as the shadows themselves helped to set the Jumbo Eye Pencil and so they worked together as a primer and eyeshadow better than the Jumbo Eye Pencil by itself. My eyeshadows stayed put for eight hours without any obvious fading and there was as much left as with my normal primer when it came to removing it.

As this was originally designed to be used as a liner I gave it a go, though I think it’s probably better for me with some of the other colours available over this white. As a liner on my eye it worked ok, again it did need setting and I actually found it worked best when you use this as a liner base for a bright eyeshadow, it really makes it stand out then. On the waterline though I did not think it worked at all for me, it doesn’t set well enough, it seemed to move quite a bit and made my eyes water. I have that problem with quite a few eyeliners though so it’s nothing new, just something to know if you have a problem with that sometimes.

Overall I am very happy with this and would definitely recommend it to anyone. I really like the white as it works well to make brighter colours and pastels pop more on your eyes and you can still blend them if you don’t use too much and build it up gradually to get the more opaque white. It applies evenly, doesn’t pull at your lids and helps eyeshadow stick for longer.

I am definitely going to be repurchasing this when it runs out, though that seems like it’ll be quite a long way off as there’s quite a bit if product in this, but I think I’ll be getting a couple of the other colours too. Whether I use them as a base or try to perfect using them as an eyeliner there are some very pretty shades in the Jumbo Eye Pencil range and, if Milk is anything to go by, I think the pastels should be pretty opaque and work well.

Have you guys tried any of the other Jumbo Eye Pencils? Any colours your recommend? Or have you tried Milk, either as a base or otherwise and how did you like it if you have?