I have to admit I wasn’t entirely sure what to call this decluttering post as it sort of covers a lot of different eye products, basically anything that isn’t eyeshadow or eyeliner. I included my two concealer palettes in here because I only really used them as under eye concealers, though they could probably have gone in a face products post as well. As with my previous decluttering posts I’ll link to any posts I’ve done to review these products and link to any of the ones I really liked.

When I was going through my makeup products I realised I have so many unopened, unused mascaras in there so I could probably have actually got rid of a few more, I just do like to at least try one kind of mascara before I get rid of it. It feels like every one of those spend X amount or buy this many products sets seems to come with a mascara so I hardly ever actually buy any myself. 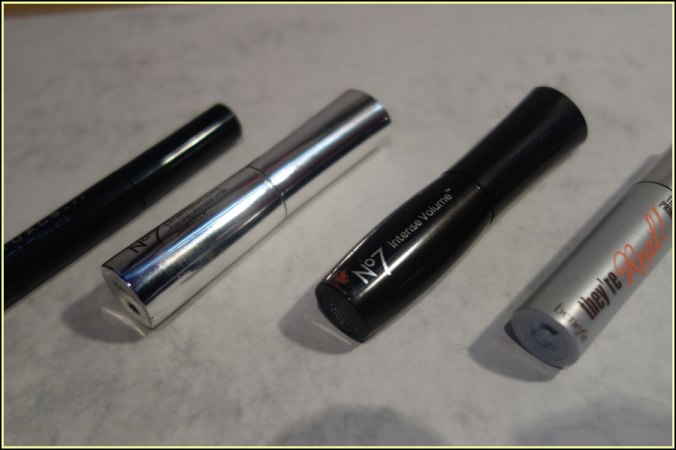 As I’ve said that I might as well start with the mascaras, these are all minis and two of the four are duplicates of ones I have already as minis from No7 so I’m going to see if anyone wants them. These are the No7 Intense Volume Mascara and the Dramatic Lift Mascara, I think this one may have been discontinued as I can’t see it on the Boots website. They both seem like nice enough mascaras but I love the No7 Extravagant Volume one and I really don’t need eight minis in my stash as I never get through them and I’ll probably end up with more before I get to half of these.

The Rituals Mascara, I can’t see any more details than that on the tube, is one that was in my mini touch ups makeup bag for ages and I love it but it’s just got so old it’s got thick and, to be honest, I probably should have thrown it out a year or so ago considering how long you’re meant to keep mascaras.

The final one is technically a lash primer with the Benefit They’re Real Tinted Primer. I got this one free with a magazine ages ago and surprisingly it is still useable despite being in my stash for over a year, it hasn’t dried out, but it did nothing for me at all. As a primer it didn’t hold my mascara any better or give me fuller lashes than an extra coat of my chosen mascara at the time would and it actually made some crumble quicker. It did work ok as a mascara by itself to give my lashes a bit of a tint, mine are naturally light brown so it sort of just added some volume. I did really like the brush on this one though.

The two concealer palettes are going for two different reasons. You can probably tell from the Makeup Revolution Cover and Conceal Palette that I only used the two colours and they are very low on product. The rest of the colours did not work for me anywhere. I quite liked the palette, for the price it was good, but it did tend to slip more towards the end of the time I was using it and clung to any dry skin I had.

The Elf Complete Coverage Concealer Palette in Fair is definitely a favourite and I will be repurchasing this at some point when I have enough for it to be worth the postage for an order from Elf. One of my favourite under eye concealers and only £3.50 for the four colours. Again I pretty much just used the one but it lasted ages. The only reason I haven’t hit pan is it got old and slightly greasy feeling after using it for two years (that shows how little I needed each time). I should have got rid of this years ago, it needed to be replaced before Elf stopped selling in the UK so that shows how old this is. I just hate the fact that you have to make a big enough order for Elf to be worth it considering the price of the individual products, it’s not worth getting two or three things then paying £3.95 shipping when the products aren’t that much each.

The final two products are eye primers. The first is Too Faced Shadow Insurance in Candlelight, which seems like a nice colour but it’s way too shimmery for me and somehow it doesn’t seem to set at all. It keeps on sliding on my lids and doesn’t seem to work as a primer at all. To be honest it almost feels more like a highlighter than a primer and could give you a nice golden shimmery finish if you wanted that. I have had this one for ages but didn’t want to get rid of it as it was the most expensive makeup I had bought at the time but it has to go really.

The final one is Urban Decay’s Primer Potion in the original formula. I got this tube with a palette and loved it but I’ve had it for so long it dried up. I bought a full sized one so I did repurchase it, kind of, but I don’t think I would in the future now I’ve found the Models Own matte one that I love and use every time instead of the Urban Decay one. 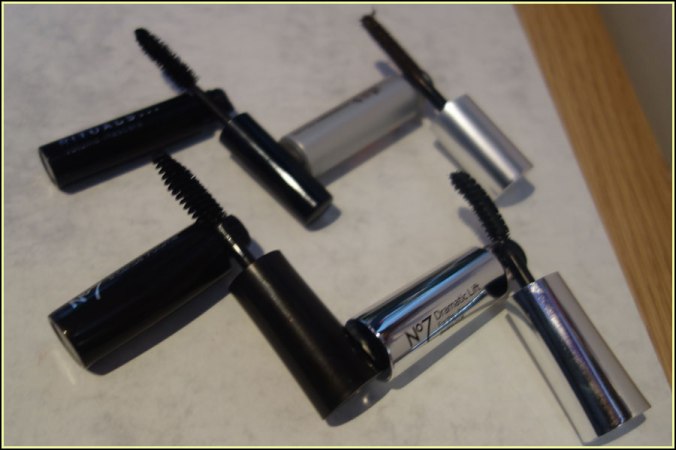 I was surprised, when I went through all of these, at how few I actually have of each of these products types. I was sure I’d have more primers and mascaras than I did. I guess I’m pretty good at giving mascaras away when I get them free unless they’re a brand I like and I must have had a clear out of my primers fairly recently to only have these two spare as I only have the two I’m keeping. I think I probably got rid of 50% of everything that goes in this category so I’d say that was a success

You may have seen the Tony Moly Panda Eye Brightener in the original photo and I was planning on getting rid of it but I realised that it might be useful as a recent under eye concealer I bought looks like it may be a little dark. It’s a nice product but always seems to show up as properly white on my skin under my eyes and I need something more salmon toned to off set the pigmentation I have under my eyes.

Also, if you want to read my other declutter posts you can find the one for eyeliners here and one for lip products here. I’m not sure what products I’ll do next time. I am tempted to go for eyeshadows but I keep changing my mind on some of the palettes so it might be more a case of leave that till last.