Another product from the Holika Holika Gudetama collaboration today with the Gudetama Lazy and Joy Cupcake Eye Palette in Tiramisu. There are two colour options available, Tiramisu is more brown and neutral based whereas Red Velvet has a red base, the names do actually match very well and I love the cute Gudetama design on the front. These palettes are actually quads and the Tiramisu version comes with two mattes, a satin and a very glittery shimmer.

I bought these from the f2plus1 eBay store but they do seem to be widely available at the moment. I think they’re limited edition so it’s a good idea t get them soon if you think you’ll want them, I’ve found in the past Korean beauty products that are limited edition tend to be available in a lot of places one day and the next impossible to find in the U.K. The prices do range a bit but they seem to be within £9 a £15, which is more than I’d normally spend on a quad but I’ve been curious about Korean makeup since finding that the skin care really works for me.

The first thing I noticed about this palettes, and probably everyone noticed about it, is the cute Gudetama design on the front. I’d be lying if I said it wasn’t one of the reasons for choosing this quad over a generic Korean beauty one. The whole palette is very well colour coordinated with the light yellow plastic for the base and the background of the printing and the side of the lid. This even carries onto the back with the writing being in yellow, which you’d expect to be hard to read but it isn’t too bad. They also have the official Sanrio Korea holographic sticker on there.

The way this opens is really nice. It’s just a standard lid, it clicks and holds shut well but isn’t hard to open. It’s more the hinge, it holds the lid at any angle, which is always nice, but it opens smoothly and you don’t get that feeling of it getting stuck. I can see this being one that’s good as a mini mirror for touch ups if you kept it in your bag. 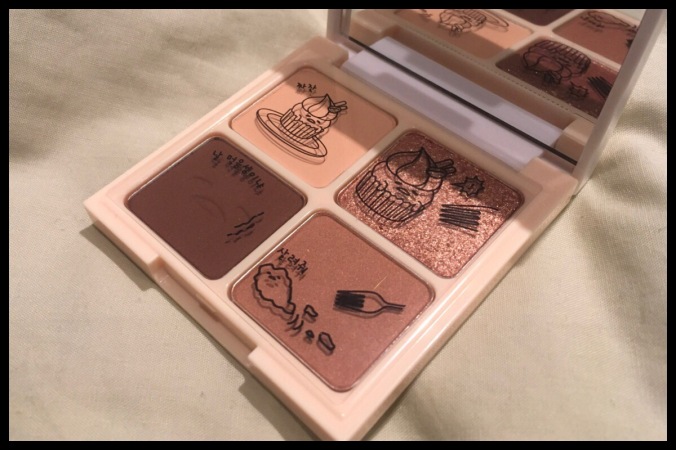 Inside the mirror is a good size, it’s slightly set back because of the shape of the lid which is a bit annoying as it does cast a bit of shadow but it’s a good quality mirror with no warping. The Gudetama theme is continued on the eye shadows themselves, or for three of the four on the clear plastic cover. There are designs with the character printed on it and on the third, the dark brown, the writing around goes with the image embossed in that eyeshadow. I can see that one becoming a bit odd once the face has been worn down but it’s a nice touch. I really like how they’ve given the top of the plastic sheet a folded over edge that fits in the gap for the hinge and holds the whole thing in place. You won’t lose it when you open it and have to hunt on the floor like I sometimes do. It may sound odd but it’s a nice extra touch.

One thing you may have noticed is the lack of any applicator, which may be seen as a negative for some people. To me it’s not really a bad thing as I don’t think I Actually use any of the ones that come with the palettes, even when it’s brushes, and I’m sure that a lot of people who use makeup will either have brushes they already use or, if they use them, the applicator from another eyeshadow product.

Sorry this looks so orange, it’s the only lighting I could get them to look true to life in the photo, even if it makes the rest look odd

The eye shadows themselves are really nice to use. They do have the three different formulas and I can’t find a name for any of them so I’ve swatched them too left to bottom right. Surprisingly, to me anyway, the two standout colours are definitely the mattes. The dark brown is amazingly pigmented and one swipe gave me that coverage. They feel like they should be dry and powdery but you get a surprising amount on your finger or brush and there’s little or no fallout. The lighter colour is nice too, unfortunately to start with the first layer did seem to change colour when I used it on the primer, it turned more orange, but a second layer sorted that and it’s not a problem when using it to blend with other colours. It’s also definitely a bit dark and more yellow toned than my skin but if you have darker skin with a yellow base I see this being a great colour for blending out other colours. They blend very well and have great staying power.

The top right is definitely the sparkliest in this palette with a warm champagne shimmer base and silver and rose gold glitter in it. I was pleasantly surprised at the lack of fallout, I expected to be sparkly after applying this, though the glitter does tend to blend further than the base colour. It isn’t as pigmented as the mattes but it’s one of those colours that gives a nice wash of colour and a lot of sparkle so it’s great if you like that style of eyeshadow. It does feel so soft, almost like a cream, when applying it and it stays very well but does benefit from a primer.

The final colour is a satin with a mid brown base and a hint of a slightly gold or coppery duochrome in certain lights. It surprised me a bit as I thought, originally, that it was a matte, it definitely comes out more shimmery when you use it than it looks in the pan. This one has decent pigmentation, blends out well and sticks around even without a primer.
I think overall I am very impressed with this palette and very pleasantly surprised at the formula and pigmentation of the colours. It’s definitely unusual to find a palette with a mix of finishes that has the mattes as the standout colours but that was definitely the case this time. I think Holika Holika is a company that I would trust to buy a matte palette from if they’re all like this formula wise. I tend not to go for all mattes, I’ve been disappointed in the past, so I’m definitely surprised at how much I like these. 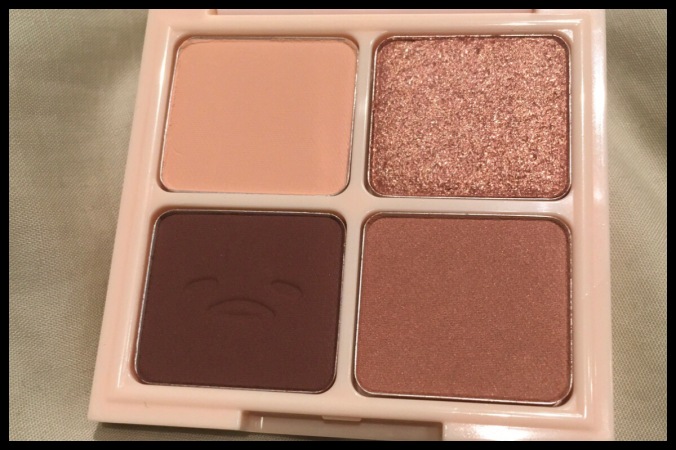 Without the plastic insert

I think I may have used the word surprised too many times in this review. I guess it’s because I went into this not really knowing what to expect but half thinking it would be one of those palettes with a collaboration that’s overpriced due to the mix of the two companies but I can say that with this one that is not the case. It may cost more than I’d normally spend on a quad, I have a bit of a love for Sleek (you may know if you’ve read other reviews in the past) where you get 12 colours for around £8 so £9 or more for four colours is higher than the majority of my palettes.

Is it worth it? If you want a nice little travel palette or a quad with enough finishes to make a good eye look then I’d say it’s a good one to go for, especially if you’re a fan of the mattes. However, if you have a lot of neutral palettes the odds are you already have similar colours to the shimmer and the satin, maybe not the mattes but the price for two new shadows may be more than you’re willing to pay. 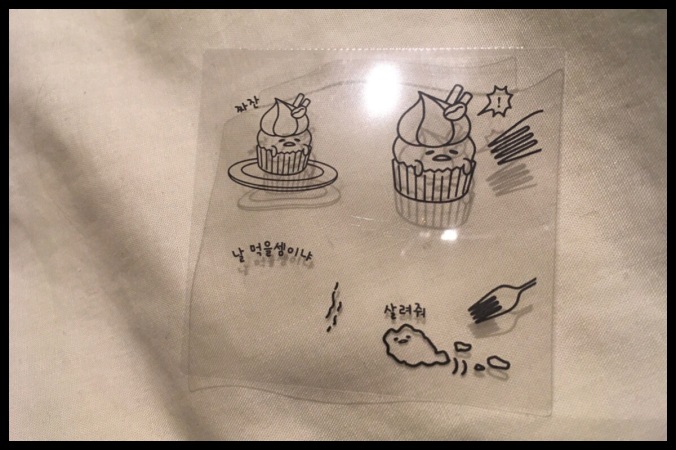 I had to take a photo of this separately, the pictures are so cute, definitely one that will be kept with the palette

I think it’s a great gift for a fan of Sanrio in general, or Gudetama specifically, who is into makeup and would recommend checking it out if that sounds like you or a friend as there are some great Korean beauty products out there at the moment and this could be a way to try a new one and get a cute Gudetama product at the same time. They do have quite a range of beauty products in this collection but I have no idea how good they are, they might be worth searching for though if eyeshadows aren’t your style.