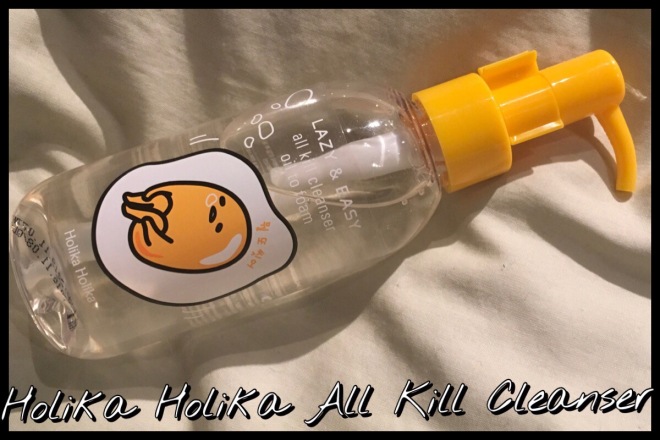 This is the Holika Holika All Kill Cleanser Oil to Foam and is part of the Sanrio Gudetama collaboration range. I think it may also be the cutest bottle I have ever had when it comes to cleansers. I have tried a few skin care products from Korean brands and, for some reason, they seem to all get on well with my skin which seems to be fairly rare when it comes to western brands o I wanted to give a cleanser a go. Add in the fact I’ve been curious about these oil to foam style cleansers for a while and this one stood out for me.

I don’t often do posts on skin care and I always make sure I’ve used it for a few weeks when I do, I was planning on doing this one in a couple of weeks time but with it being limited edition I thought it was best to get it up while it’s still available to buy. I know my skin and there are normally two phases when it is likely to react to things. The first is within days if it makes the sensitive aspect of my skin flare up, the second is a couple of weeks later, or normally between the end of week one and the end of week three, where the acne prone aspect shows itself so I have past both stages and think I can give you guys a good review of how it worked for me.

As I said, this is a Korean beauty brand and is quite hard to find in the U.K. I got mine from the f2plus1 eBay store a few weeks ago, I posted my haul here if you want to see everything I got and have done some reviews of the others over the past week or two. It seems like at the moment it’s pretty widely available on eBay and the prices range between £9 and £15 so it depends on which store you choose to buy from. I tend to stick with the one as I’ve found them great with all past orders but it probably depends what else you want to buy and what they have in stock.

I really like the design of this bottle, the pump is surprisingly good and easy to use, one pump is enough to get the product for your whole face. It also doesn’t end up dripping everywhere afterwards and it’s remained clean without needing to wipe it. I do like the little clip that’s there on the top as well, it makes it safe for travel if you wanted to and you don’t accidentally get some product leaking from an accidental bump on the pump if it falls on the floor, which has happened to me with past products. Unfortunately I can’t read Korean but maybe someone else reading this does so I’m including a photo of the writing on the back. There was an extra layer of film that had an official Sanrio holographic sticker on it but this has unfortunately gone missing and I forgot to photograph it when I first opened it.

The first thing I noticed about the bottle when it arrived, apart from the cute design, was the size as it’s a lot smaller than I was expecting. I thought it wouldn’t last that long and was expecting to either need to repurchase or leave it after a few weeks. I have been pleasantly surprised as I’ve been using it once a day since two days after my order got here so that means three weeks and it’s only gone down probably one quarter of the way. I do only use it once a day as I know my skin can’t take most cleansers twice a day so it would probably last a couple of months if you were using it twice daily. It’s not the longest lasting one but compared to some that seem cheap to start with you won’t be repurchasing it too often.

The product itself is a lot thinner than I expected, it come south of the pump easily but can get messy if you’re not expecting it to run everywhere on your hand. I found that having my hands slightly wet before adding the cleanser does make this easier and you don’t lose any accidentally down the drain. You mix the oil with some warm water and it turns into a light foam. It’s a nice amount of foam and is easy to apply to your face without too many bubbles. They do disappear quickly but reappear as soon as you start to rub it on your face. It may sound odd but they feel quite soft as far as bubbles go and it is nice and relaxing using this. It has a slight smell, again is the kind you get with a lot of Korean beauty products in that it’s a light, powdery floral smell. It’s not too strong but I know it could be off putting for some, especially if anything perfumed sets off a skin sensitivity.

I should probably tell you more about my skin type first, it is a bit of an odd mix that’s hard to find things that actually work well especially when it comes to cleansers. It is generally fairly normal, not oily, but very dry in parts, sensitive to ingredients and very acne prone even with medication. I said about the times when my skin is likely to react and I can say I have been through both phases. As far as sensitivity goes there were no problems at all, though I would recommend a skin test in your arm or somewhere if this is a problem for you. The acne prone part I did have a bit of a flare up, which is expected with my skin getting used to a new product, but after a few days with very small spots it’s calmed down and back to it’s normal self. I was pleasantly surprised there as the whole oil aspect of this cleanser did worry me a bit when it came to spots.

I will say it hasn’t particularly cured any of these problems, I think probably the one it has had the most impact on is the dry areas as it has helped a bit with keeping my skin feeling plumper, if that makes sense. It doesn’t leave that overly oily feel of some nourishing or moisturising cleansers or that feel of a film on your skin, it leaves it feeling soft and silky smooth and any moisturiser works well on it, I have tried a few I use regularly to see how they each reacted and no problems.

Overall I am definitely happy with this for my skin. I’d say if you have similar skin in that it’s sensitive, normal or dry then this could be a nice, gentle foaming cleanser to give a go. If you have oily skin, skin that has a sensitivity to perfumed products or acne prone skin that flares up at the slightest hint of moisturising products then maybe this isn’t one for you. I know before now, when I was on different medication for my acne if I even looked at anything moisturising it seemed to break my skin out so , although it didn’t cause me problems I’m not sure how it would fare for others. Maybe risk it if it’s within your budget and you don’t mind if it fails. I know I tried so many products that didn’t it was surprising the ones that did work in the end.

My main problem with this, and the main reason I can’t 100% recommend this to anyone, is the fact it’s limited edition and I have no idea if they have a permanent line product like it. I know how annoying it is to have a skin care product that you and your skin love and then, just as you want to repurchase it, it’s gone. There’s nothing in the permanent line at the moment but that may be because this version is out. I will keep my eye out but if anyone has any information I’d be grateful. I am considering buying more of this and stashing it, though I have realised since buying it I can’t find much on their animal testing policy so I’m holding back on it because of that too.