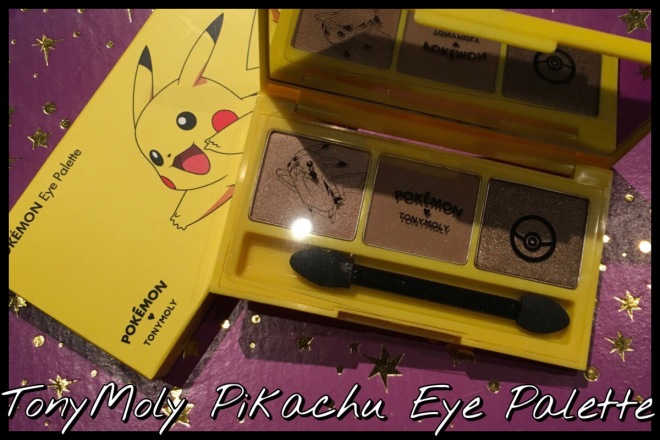 Another product from the TonyMoly Pokemon range today, I was going to spread them out a bit but then I realised they’re limited edition so best to post as soon as possible so there’s more of a chance of them still being available. There are two eyeshadow palettes in the range; Pikachu (neutral browns) and Jigglypuff (more pink toned) and each has three colours in it. I only have the Pikachu one but I think the Jigglypuff also uses the same combination of a dark and light shimmer alongside a ‘matte’.

I bought this from the f2plus1 eBay store but there are quite a few people still stocking it at the moment. Price wise it seems to range between £12 and £15 so it depends where you get it from. I’ve tended to stick with the one as they’re always quick and they pretty much always have everything I want so saves multiple orders.

I have never bought any TonyMoly makeup before, though I know their skincare works well with my skin and they seem to get good reviews when it comes to products in general so I thought I’d give it a go. They are a cruelty free brand, it’s rare to be able to find this information on Korean Beayty brands it seems, and this is why I’ve tended to go for their products alongside the fact of the cute packaging and, in this case, Pokemon theme.

Although this is called a palette it’s a trio and the size reflects this, it would be great for travel. I do love the Pikachu theme but the bright yellow doesn’t give it the most expensive look ever, I won’t have any trouble finding it amongst my makeup though! The card sleeve around the outside is nice as it does protect the plastic and includes information on the product (in Korean so I don’t understand but it’s there). I am definitely keeping this as I want the palette to stay as bright as possible.

The palette is made of plastic and feels very durable, It clicks closed and holds really well though this does mean it’s a bit harder to open to start with. The hinge holds up well, it’s one of those that will stay in place wherever you put it and the mirror takes up the whole of the lid so, although it’s small because of the size of the palette, I can see it working for travel if you need it to. On the back of the back of the palette it has the names of the shades, though I can’t read them, along with the finish. If anyone does speak Korean do you know what the names are? I have a feeling they’ll be Pikachu themed but it’d be nice to know.

There is the standard foam applicator that I don’t think I’ve ever used, though it is a nice one if you like them and has two different sized ends. It’s the kind of rubbery foam that grabs a lot and it could work well for precision application. There’s a clear plastic sheet on top but it has the Pokemon themed graphics on it, different for each shade. I like this idea, it gives you the Pokemon look but leaves the eye shadows themselves flat so you don’t have to worry about destroying Pikachu when you use it. 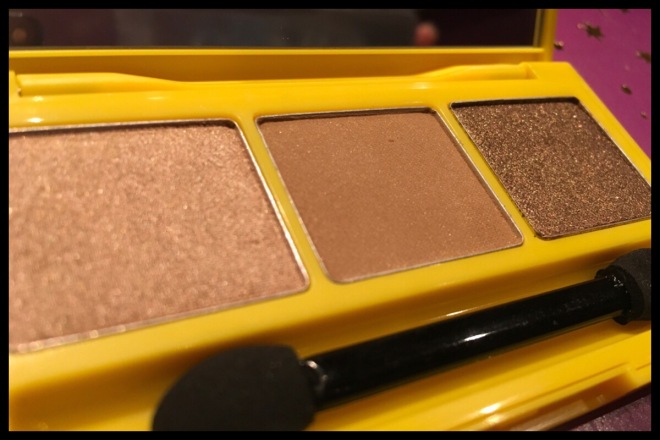 There are two shimmer colours and one ‘matte’, which I don’t think would really be considered matte here as it has definite shimmer in it. It does give a more matte finish and it closer to a matte formula in pigmentation but it gives that glowing matte rather than flat matte like most western matte eye shadows. I’m not sure if this is a general Korean beauty thing or just this palette as they seem to lean towards glowing skin over matte.

As far as staying power goes these were pretty impressive when it came to the colour on the primer. I did the swatches on my arm and left them there with taking my jumper on and off they were still there hours later. On my eyes they lasted as long as I wanted without moving or creasing and seven hours later when I removed it there wasn’t any obvious loss of colour or patchiness.

I’ve swatched the colours both with and without primer. I’ll start with the two shimmers. The lighter of the two is a neutral beige toned champagne shimmer shade, it’s a good overall lid colour. The darker one is showing up a lot golder in the photos as it’s picking up the golde toned shimmer in there. It’s a dark red based brown with gold and brown shimmer in it. The shimmers, like most shimmers, do well with and without, they blend really nicely and feel so creamy to apply they’re almost more like using a thick cream eyeshadow than a powder. They apply opaque with one coat and blend well with others, though the shimmer does tend to spread further than the base.

The ‘matte’ is slightly more powdery and a mid brown, though it’s more on the warm side. It does apply evenly and pretty opaque with one coat when used on the primer but disappears directly on my skin after about ten minutes or if I try to blend at all. With a primer it sticks well but also blends, especially when blending with other colours. 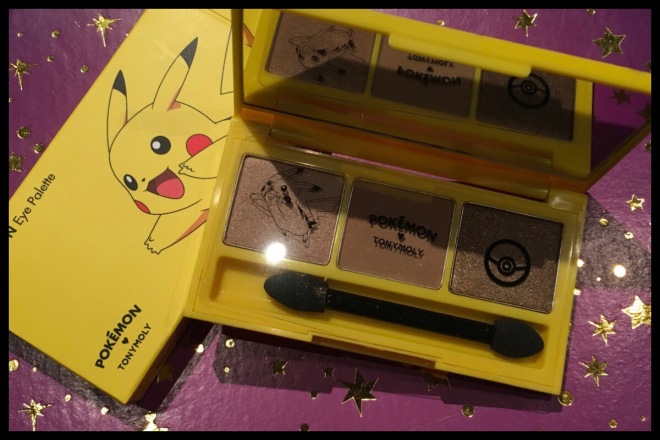 Overall I am very happy with this palette. I was a bit worried it would be one of those franchise products that’s underwhelming when you use it but I can get a good eye look with the three. I think it’ll be a good travel palette for a weekend away. It’s one of those that I probably have all of the colours in other palettes so, unless you like Pokemon, if you have neutral palettes you probably already have this covered and it’s not likely to be worth it. As far as small trios go it’s a good one, I normally end up with one colour I won’t use from those and I’ll definitely be using all of these. If you like Pokemon or know a beauty fan who does then so far the couple of things I’ve bought from the range have impressed me so it’s worth looking at these and seeing if there’s anything you’d like.

Have any of you tried anything else from this range? Anything you’d recommend? I’m definitely going to be making another order soon and very tempted by a couple of the cushion products, I’ve never tried a cushion one before and have a feeling the foundations wouldn’t match me but the blushes sound good.