For a while now I’ve seen the rainbow highlighters on instagram and YouTube and thought they looked really pretty but wasn’t sure I’d ever use one. Add in the fact that I hadn’t seen many good reviews for ones available in the UK and I managed to avoid buying one. That is until I was looking on an eBay store I’ve bought Korean beauty products from before and saw that TonyMoly did one. This is called the TonyMoly Luminous Goddess Aura Aurolighter, though I think the official product name is TonyMoly Luminous going by the inside packaging.

I will admit it was bought on a bit of a whim but it’s so pretty and I wanted to see if this one lived up to expectations as I’ve not seen much on it really. It costs £11.24/$14.10 from the seller f2plus1 who I’ve bought from in the past but I’ve seen it on eBay from other sellers too. I’m not sure where you can get it besides eBay or Beaty Net Korea (their other online store) if you live in the UK. 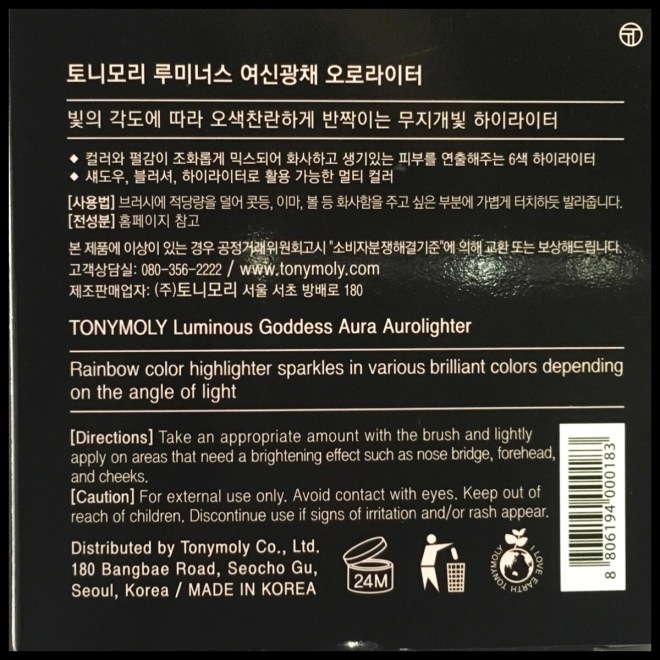 I think this is the first Korean beauty product I’ve bought where the packaging isn’t the thing that first caught my eye. The outer box is simple with a very reflective black box and pink writing with the name and logo on the front and directions on the back in both Korean and English. I’m not sure if it’s a direct translation, maybe someone who speaks Korean could say, but it’s easy to understand. 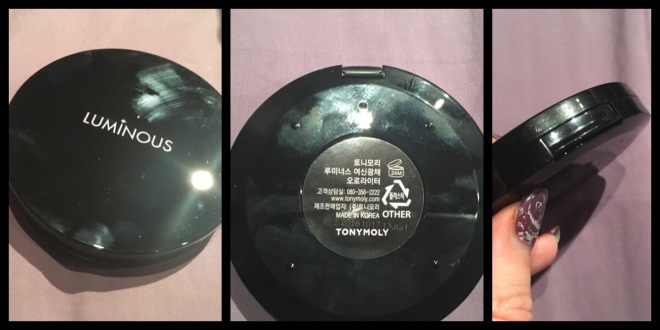 The compact itself is pretty much the same design as the outer packaging. It’s definitely a lot more minimalist and classic looking so I can see it appealing to a larger range of people than the cute, bright packaging that I’ve had in the past. One thing about this that is slightly annoying is that it is a fingerprint magnet and, once they’re there, they’re very hard to clean off. I tried wiping but the marks were still there and it just smeared it. Something that I love about this product though is the way you open it. It doesn’t just click shut, it has a button on the front that you push in and the lid pops open slightly.

When you open it the hinge is slightly stiff which, I think, is a really good thing as it means it stands up at whatever angle you want it to without you needing to hold it. It’s also got a really nice sized, good quality mirror that means it would be a great product for travel if your others don’t have one.

I love how bright the colours are, it’s one of the first things I noticed about this one compared to others I’ve considered buying before. I wasn’t sure if it was just the lighting in the photos online, they are sometimes misleading, but it really is this bright. You also get a good amount of each colour, though it does say that as it’s hand made the colour distribution may be slightly different.

One thing that might be worth noting for some people is that it does have a slightly perfumey smell. It seems more common with Korean products when it comes to makeup but it has a slightly powdery, sweet, floral kind of smell that’s hard to describe but might out some people off. It doesn’t really linger when you apply it but you do notice it every time you open the compact.

When it comes to the formula for the product self it is so nice and easy to use. It does seem to leave a lot of fallout if you’re not careful, the outer rim of the compact was glittery before I got it and has since got more glitter even after wiping it. It feels really soft and buttery when you swatch it and the colours do really show up differently. It’s hard to see in the photos but even the one with a swipe from the brush you can see the rainbow hint in the light. I think the main way I would use it is to swirl the brush over all of the colours as you get a multicoloured shimmer but it’s not so bright that it looks like you dipped your face in rainbow glitter. When you do it this way the golden and more orange or pink tones come through a lot more on my skin than the cooler ones but it might be due to my skin tone.

Something that impressed me was that, although I did swirl the brush around a lot, it didn’t end up looking like someone had mixed all the colours together on the surface. You can still see the individual colours with clear lines. I also had to take a photo of it on the brush when I did the swipe along the lines, it looks so pretty. I used the Look Good, Feel Better powder brush I reviewed the other day for these swatches but I have tried a smaller one and a denser one. I’d definitely say this one gave the best results.

Tony Moly, as a company, are cruelty free (as far as I can find out) which is great though I have no idea if this is vegan friendly or not.

At the end of the day I would recommend this product if you’re looking for a nice rainbow highlighter that will leave a subtle rainbow glow without the need for painting individual lines on your face. Is it something that you need in your collection? No. But at the same time it isn’t something I regret buying as now I have one I won’t be wondering what I’m missing and if I ever want any of these colours individually as a highlight for whatever reason I do have them. Plus it is pretty when it’s all mixed.