Title: Escape to Christmas Past: A Colouring-book Adventure

Earlier this year I did a review of the Shakespeare’s World colouring book from this series, the Puffin Classics colouring books that are based on classic books or authors. This

Escape to Christmas Past uses themes and phrases from A Christmas Carol, a classic Christmas story, so it has a seasonal theme and seemed a good one for this time of year. This was actually the first of this series I saw and I loved the look of it.

As this is an adult colouring book the pictures are mainly made of smaller patterns and pictures within the scene so they’re small areas to colour and it’s pretty relaxing. As this one is so detailed I would say it’s more of a fine liner colouring book as the pencils I have got too blunt to fill in the finer details very quickly so you’d have to sharpen them very often. This series of colouring books in general is a lot smaller than the majority of adult colouring books so it’s a great one for travel if you like to colour on journeys or take it away with you, it’s small enough to fit into most larger handbags I think.

One of the things that drew me to this series, besides the themes themselves, is the front cover. I love the fact it has the same art style as inside and has parts of it in colour that look like they’ve been coloured in with different media. There are also accents in a metallic foil, this book has gold, that bring out areas and lines, which adds to the look. Each of the books has a different colour as the accent colour so you can have the series on a shelf and it’s easy to tell which is which. As the height is pretty similar to most paperbacks it actually fits really well into a shelf without standing out.

The paper these books are made of is nice and thick, it’s got a bit of parchment feel to it and it’s pure white but I’ve not had any problems with colour bleeding through to the other side even when I colour over it multiple times with fine liners. I use Staedtler so I don’t know about other makes but they also don’t bleed outside the lines which has been a problem with some other books with this style paper. 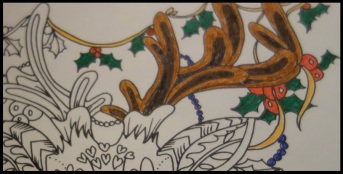 I love how detailed these are, though it does cause problems with thicker pens and pencils, it’s very relaxing to focus on the smaller areas and how they make up the bigger picture. I also like how some of the images use black ink as a background so you have night sky images without having to colour a lot in and you have a great contrast at the end. The images in here are all around a Christmas Carol but some of them aren’t scenes from the book, I do love the Bah Humbug page with the humbug sweets turned into bugs, but a fair amount do include quotes from the book and the image is either the scene or a literal image of whatever is in the text even if it’s not what was originally meant. If you’re expecting them all to be scenes from the book then you’ll be disappointed, there are probably around half that are simply Christmas or a Victorian themed Christmas like baubles, fireplaces and snowflakes rather than anything specific to a Christmas Carol.

As the front and back pages with the title on are also line art so can be coloured in if you want there are 96 pages of colouring in here, with some being double page images but the majority being one side. They are smaller than the average colouring book but I don’t see this as a negative given the quality of the images and the detail in them. 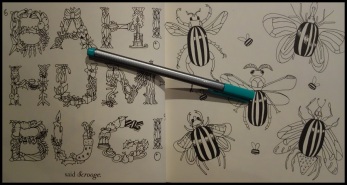 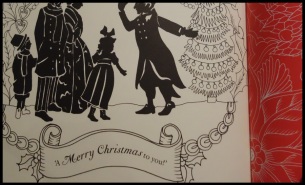 I would definitely recommend this book to anyone who’s a fan of colouring books and wants something seasonal. I think that most people will have heard of a Christmas Carol, even if it’s a movie or the Muppets version rather than the book itself, and none of the quotes are obscure ones so they should be ones they’d recognise. I think this is definitely one fans of Charles Dickens in general, or the book specifically, would enjoy. I also don’t think it’s necessarily just a colouring book for adults, I think that some children would enjoy it as it’s got some pages that I think would make anyone smile, going back to the Humbug one, and if they enjoy staying inside the lines it would keep an older child happy for hours.

Basically if you like adult colouring books and classic books then this series is a great one to pick up in general. Even if you aren’t a fan of classic books the themes they’ve done are so well known that I think people would enjoy them anyway.

All images are copyright Good Wives and Warriors and Puffin Classics, I’m using them for review purposes