Is it just me or does anyone else’s computer, or technology at least, seem to break down at the same time each year? Last year I had to wipe it and redo it all and this year the WiFi has given up on me. I can try using the Ethernet cable but it’s hard to get at and I think it’s the internet receiver in general that’s gone so it may have to go and get fixed.

My advent posts are all on the iPad, which is also on its last legs, so it’s not affecting them but I’ll have to see what I do about the longer ones I had planned for after Christmas.
Why is but always around Christmas? Will probably wait till January to get it fixed as there’s so much going on at the moment but just wanted to post a bit of an update because I felt so much in my laptop for these blog posts normally. 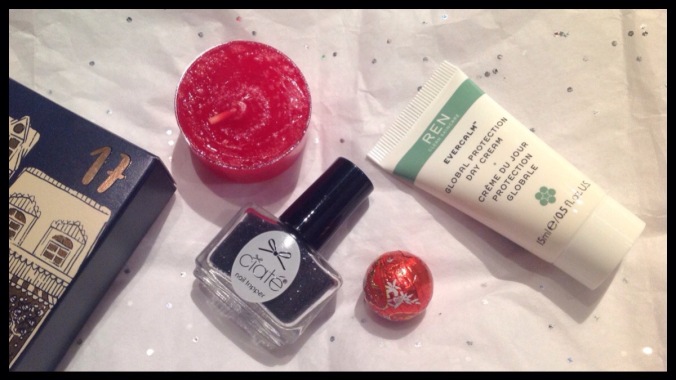 I just realised today that were over half way through the month and were less than two weeks away from the beginning of 2017. How has this year gone by so fast? I think it took months for me to remember not to write 2015 at the beginning of this month so it’ll still be like its 2016 for a while yet for me.

After today my room is now covered in black glitter from the Ciate Mini Mani Month nail topper, it’s called Starry Night and I do love it but see things make so much mess no matter how careful I am. The Marks and Spencer advent calendar is a Ren Evercalm Global Day Cream, which I don’t think I’ve tried again though I have had things from the make before and I know they do tend to do well with my skin. The Yankee candle today is a Cosy By the Fire, one of the more stereotypically Christmas scents from Yankee that I quite like now.
END_OF_DOCUMENT_TOKEN_TO_BE_REPLACED