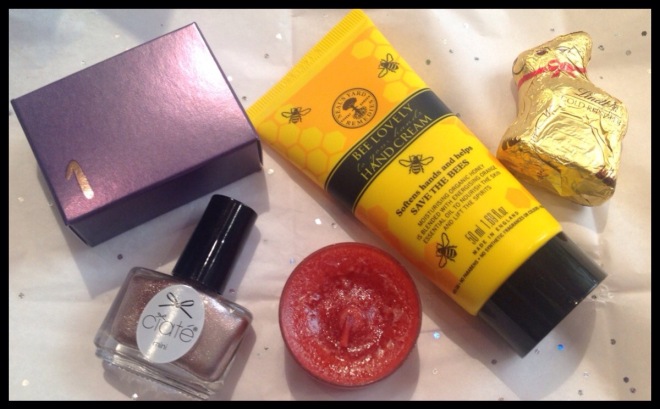 It’s the first day of December and that means advent calendar time! I may have ended up with four when I saw a Lindt one on offer and couldn’t resist the chocolatey goodness. With these advent calendar posts I do mini reviews or first impressions for the things I get in the calendars on that day. I will be doing more in depth reviews on some of them in the future when I’ve had a chance to try them some more.

The first day of advent has the Neal’s Yard Bee Lovely Hand Cream in the Marks and Spencer calendar, a Ciate mini Geology nail varnish in Goal Digger from the Ciate Mini Mani Month and a tea light in Spiced Orange from my Yankee Candle one. At least I think it’s Spiced Orange, there are two red ones and nothing on the door to say which it is. I do have a scratch and sniff type card with the other one on it and this doesn’t smell like that. If I’m wrong I’ll come back and edit it when I find out.

I do love Ciate nail varnishes, I had a Mini Mani Month three years ago and only just finished some of them and they’re still going strong so I know these work for my nails. I haven’t tried the Geology ones though, I’m looking forward to getting the top coat to see how they works together. This Goal Digger is a really nice rose gold metallic base with shimmer in it. I have tried it on the nail wheel and it’s a fairly thin formula but it does spread well and has a very even coverage. Two coats was enough to be opaque but I’d go for three to be safe. I’m planning on using this on my nails this evening so I’ll be able to see how well the Geology formula compares to the originals I’ve had before. I’m not sure if this is a permanent range product or not as some in e near are limited edition or exclusive but I have found it in full size on Amazon here so it is available outside of this set, I think I’ve seen it in a couple of the smaller Ciate Christmas sets as well. This is definitely one I’ll be putting on a list of ones I want to get in fulls size, I just live the colour, si I hope this formula works with my nails.

The first Marks and Spencer advent present is the Neal’s Yard Bee Lovely Hand Cream which is always a good product type to have. I seem to collect hand creams around Christmas, get another to last the year and then stock up again next Christmas. This one is a really nice consistency, it’s not too thick and spreads evenly and well. It’s a honey and orange scent and you definitely get both, it’s a sweet smell with the honey being pretty strong but the orange is there in the background to stop it being overpowering. I don’t know if anyone else finds this but I often think that honey scented products, or rather ones with honey in them, tend to leave an almost waxy feeling on my skin to start with. This hand cream has that too but it disappears fairly fast and sinks in well. This hand cream is also free from GM, parabens, synthetic fragrances or colours, mineral oils or silicones and is certified organic. It’s not suitable for vegans due to the honey it is suitable for vegetarians and is cruelty free. This tube is 50ml and it’s full sized, though the tube I’ve found on the M&S website has an extra bit of blue on I think it’s the same product and costs £10. I’m not sure I’d buy it again but it is a very nice hand cream so we’ll see when I’ve used it some more.

I really like the idea of having tea lights in an advent calendar as they last four to six hours, or that’s what Yankee Candle say they do and I tend to find that’s right. This scent is Spiced Orange, or I think it is anyway, which is a very Christmassy scent to me. Unfortunately this tea light isn’t very strongly scented, even when lit it’s not a smell I notice until I’m very close to it. It’s a sweet orange, or possibly more like a lot of clementine or satsuma smells in that it’s more subtle and doesn’t have quite such a sharp citrusy kick to it. I don’t really get much spice, or none I can identify though it has a general warm hint to it so I guess it’s a general subtle spiced scent. It’s a nice enough scent, one you can have in a small room and it won’t overpower you, but not one to fill a large room. It may be because it’s in the tea light form, it’s also available in other sizes of candle on their website, I know that some of the other scents I’ve had in the past are stronger in the larger jar candles than in tea lights. The products range from £1.80 for the votive to £21.99 for the large jar candle and a pack of twelve tea lights is £6.99. This scent has some decor pillar candles and melt cups but none of the original wax melt shapes and everything is in stock at the moment.

And that’s day one done. The reindeer Lindt chocolate didn’t last long, there’s something about Lindt chocolate that’s Christmassy to me, I think it’s that it’s the only time of year, apart from sometimes Easter, that we ever have it so it’s a bit of a special treat. Have you guys got advent calendars? Are they popular where you live? I’m not sure how popular or traditional they are outside of the U.K. but I’ve had one every year for as long as I can remember so it’s a big part of Christmas having this build up for me.