This is one of those posts that I’ve had in my to write pile for ages and haven’t got round to until now. I don’t tend to use exfoliators in the summer as it’s more about stopping my skin becoming oily but in the winter they really help remove dry skin so as it’s back in my skin care routine it reminded me about this post.

I first got the Pixi Skin Treats Glow Tonic Exfoliating Toner in last year’s Marks and Spencer’s advent calendar and it was a decent sized sample, I think it was a 100ml bottle which is great for trying these out as you don’t need much of this each use. I still use it for travel but do you think I could find it when I’m actually wanting to photograph the two together? Of course not. This bottle I bought a couple of weeks ago from ASOS, they had an offer at the time but at full price this 250ml bottle costs £18. It is available in quite a few stores here in the UK when you look on Google but I’ve bought from both ASOS and Marks and Spencer in the past and trust them so I’ll just link them. There are so many that sell it though I think it should be easy to find and costs the same amount in all of them.

One thing I love about the Pixi Skintreats range in general is the packaging, the colours and the design of them are just so clean to me and it’s something that I have out on my side so I use it regularly but it looks nice in the bathroom as well as being functional. I know looks aren’t everything but it’s always a bonus when a product that works also looks nice on the side if you have the space. I’m not sure why but the orange, pale green and rose gold combination just seems to work for me and definitely makes it stand out amongst other brands. The only thing is the rose gold writing does not photograph at all well and may be hard for some people to read in person as well. I tried to photograph the ingredients and instructions for using it on the back so that they’re readable but you may have to make the image bigger by clicking on it. 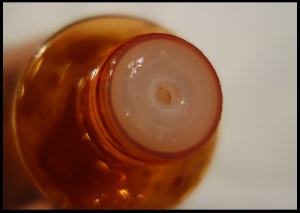 The top for this bottle makes this very easy to use. It’s the kind that you can squeeze it if you want, it’s pretty soft plastic so easy to do, but I find I get way too much product out like that so just shaking it out onto a cotton wool pad works best. These things aren’t meant to be refilled but you can prize the clear plastic bit off the top if you want to decant it into something else for travel, which is what I have done in the past for the smaller bottle. It just makes it easier to control, for me at least, than having to angle the bottle together and you don’t lose the product as much.

As this is an exfoliating toner it’s meant to remove the dead skin cells and basically do what a scrub or exfoliator does but relies on the 5% glycolic acid rather than any small beads for the scrub effect. I do like how scrubs work on my skin as I get dry patches but I find that a lot of them can be too scrubby and make it red and sore so this kind of exfoliator is a great way to have the benefits without those problems.

It says the other main ingredients, at least on the front, are aloe vera and ginseng so this is fairly soothing with the aloe vera but the ginseng tightens the skin, at least I think that’s what it’s meant for. It doesn’t smell acidic or of alcohol like some similar ones I’ve tried, I think the main scent in this is the ginseng which is pretty strong to me in the bottle. When you apply it to your face it’s there for a few seconds but then it seems to evaporate and the scent goes so I don’t see it being a problem unless you’re very sensitive to smells or that scent in particular puts you off.

This product is meant to be applied with a cotton wool pad, or pretty much whatever you would use with a makeup remover type product, after cleansing as a toner. It doesn’t have to be washed off which makes it easier to use, especially when travelling, but it does have to dry before you add a moisturiser. It’s meant to even skin tone, brighten and leave you with a clearer complexion as it removes any dead skin cells.

As far as how effective this is I find it works really well for my skin, it’s one that’s in my skin care routine both the morning and evening and it’s not too strong for my skin so I don’t have a reaction to it and it doesn’t make it overly dry. I find that after using it my skin does feel smoother than just using a cleanser and it has definitely helped to keep the dryer patches I get at bay. I find that it actually means the moisturiser I’m using is lighter as my skin doesn’t have the dry patches so in turn that means I have fewer break outs, it’s a bit of a knock on effect. 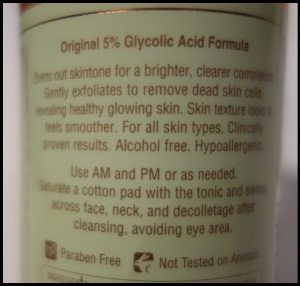 I would definitely recommend this as a product to try if you have skin that could benefit from an exfoliator but a lot of others are too strong. It’s a cruelty free product, it says it isn’t tested on animals, and also is free from parabens which I know is something a lot of people look out for now. I would say that, although it’s slightly more than I would often pay for a skin care product, it does last me a long time, one bottle will last me months using it twice a day, and with the way it helps my skin it’s worth it. They do sell these in the 100ml bottles, the smaller travel sized one I have, for £10 which may be the one to look at if you’re just trying this out as it does still last a long time and you save £8 if it doesn’t agree with your skin.

Basically if you’re on the look out for a new exfoliator or toner then I think this is worth checking out and it’s one that should be easily accessible. It seems to be one of the products that’s anywhere that sells Pixi skincare so if you know a place near you that stocks them have a look there.