This is the second Pusheen gift set I’m reviewing and this one was definitely better than the bath fizzers set from Monday. This is the Pusheen Nail Art Set and costs £8 at Boots, though it’s in the Christmas three for two offer. In the set there are three nail varnishes in the shape of upside down ice cream cones, a Pusheen shaped nail file, two toe separators, a black nail art pen and a sheet of Pusheen stickers (which may have been the main draw for me).

In the past I have bought a few nail art sticker sets and they all seem to have the same flaw of the stickers coming up at the edges quickly, I’m not sure I will ever learn that this happens but these were so cute and I do love Pusheen so I thought I’d give them a go. I know that I am probably twice the age of its intended audience, being 27, but I liked it and thought I’d review it in case any of you guys are interested in it, whether it’s for yourself or someone else. I do think it makes a very nice gift set with everything n there, like an introduction to nail art. 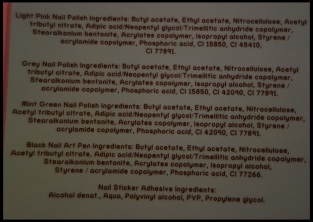 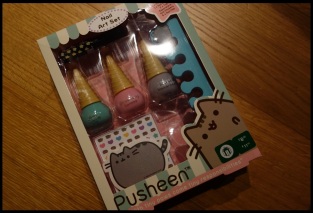 I really like the style they’ve used for the boxes in this range, the colours remind me of ice cream shops, which does go with the nail varnish shapes, so it feels like it might be more a summer gift set as Pusheen has so many seasonal versions they could have done a more Christmassy one. The back of the box has a list of what’s in the set along with directions on how to use it and ingredients. There’s also a box with three different nail art designs; easy, medium and hard, which give you some ideas on what you can do if you’re just starting out. The easy is simply apply a sticker, the medium is dots and the hard being a Pusheen face, which I did attempt but it looked kind of derpy so will need to practice that one.

I’ll write about the more filler items (at least to me) first. The nail file is a nice enough nail file, it does work well and it’s a cute shape to have out on the side but it’s nothing special. I do tend to find that nail files seem to disappear for me so I’ll definitely use this, you can never have too many nail files. The toe separators are something that I don’t think I’ve used in years, probably since an early beauty set when I was nine or ten, as my feet just don’t work with them due to the shape of my toes and where the nails are they don’t actually do anything to help. I do know people who find they help when applying nail varnish so if that’s the case these may be things that will get use for you. They do feel comfortable when I tried them and there is a Pusheen there, though the fact that he’s quite wide does make the gap between your big and second toe wider so he’ll end up squashed over time. 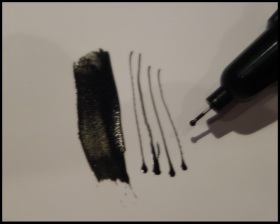 The nail art pen is quite a nice design. I like how soft it is and easy to tell, when you’re squeezing it to get the nail varnish out of the tip, when it’s going to appear as there’s more resistance. I’m not sure if anyone would use the brush as it’s quite a thick nail varnish brush, it’s thicker than the ones in the standard nail varnishes of the set, and the formula is runny and not that pigmented for a normal nail varnish. It did apply fairly well but it’s a bit runny and got quite blobby compared to other nail art pens I have. I think it’ll be a good one if I ever want to take a black nail art pen away as it’s a small size and I would have no worries about it opening in my bag as it’s pretty secure. 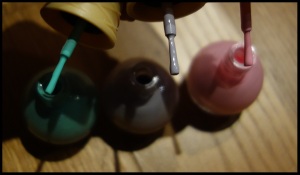 The nail varnishes looked nice but I wasn’t expecting much from them, being in an £8 set with the rest, so I was pleasantly surprised by these. I won’t say they’re amazing, they’re pretty thin and did need at least five layers to become opaque, but they stayed for four days without any obvious chips and no base coat so that was a nice surprise. I only removed the nail varnish because the stickers made them look scruffy and I’m not precise enough with nail varnish remover to only remove some nails and leave others. The bottles for these are nice, I like the upside down ice cream shape, and the cones are surprisingly good for handles as they made them easy to control and hold. The brushes are pretty thin but then it’s probably designed for smaller nails than mine and they were still easy to use and covered my nails well without as much overlap around the edges as I sometimes get. 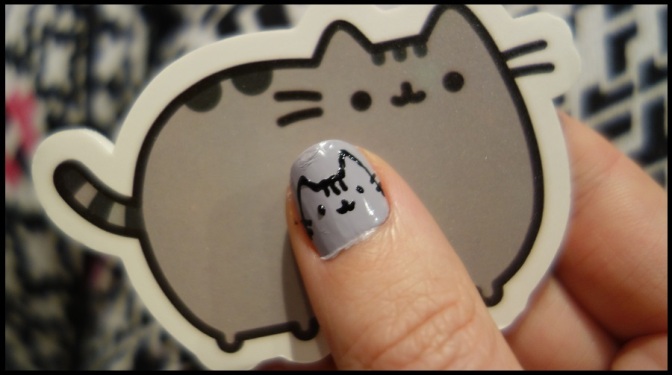 The colours are nice, though definitely summer or spring ones for me. There’s Strawberry Sundae (pale pink that’s surprisingly bright), Sweet macaroon (grey toned pale purple) and Mint Cream (pastel green, more on the blue side). I think they did all benefit from a matte top coat, it seemed to make them stand out more, but the colours were nice anyway. I will definitely be using Sweet macaroon as it’s a great muted pale purple, with the matte top coat it’s almost grey so worked well as a Pusheen base. I will probably use the other two colours as well, just not in the winter months. 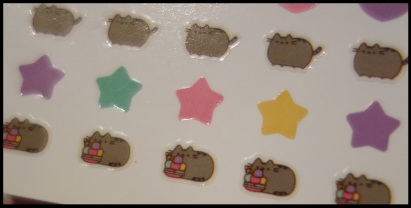 The main draw for me was the nail stickers and they are very cute and well detailed. There are three different Pusheen designs; one in a tea cup, one with ice cream and one plain Pusheen, and there are rows of hearts and stars in various colours. These stickers are semi transparent so they do show through the base colour, this is more obvious on the stars and hearts and the teacup in the one Pusheen design, the other two Pusheens didn’t get affected too much with the different bases.

I was surprised at how sticky they are, I often find that nail stickers rely more on the nail varnish than the stickiness to hold them but these seemed good. I did find them easy to apply as long as they didn’t accidentally touch another part of the nail, they left a bit of a tacky residue if they did that like when you try to remove a price off something and it doesn’t want to go. The only problem with these is the same problem I’ve had with a lot in that the edges in some of the peeled quite a bit. Within a day some of them were coming off and catching on things. I even did a second top coat and used some underneath to hold it down but that failed too. 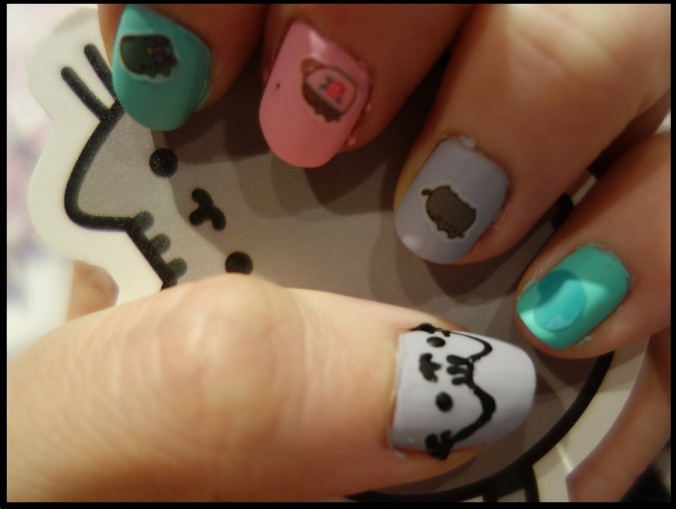 Finished look with the nail art, stickers and the matte top coat

I think these would work well to be used as nail art and applied on the day you wanted to go out but nothing that you want to last well. They were nice and flexible so I thought they may not have this problem as it’s often the thicker ones that don’t want to bend to my nails. It was also a bit odd that when I removed them the parts that hadn’t peeled really didn’t want to come off and underneath they actually seemed to have softened the nail varnish as that was slightly stretchy as if it hadn’t dried completely even though it did before I applied the stickers.

Overall I was very happy with this and think it’d make a nice gift for someone who’s a fan of Pusheen or just likes cute things or cats and nail art. It’s probably not one for people who already know about nail art, unless you think they’d like the Pusheen stickers, and more for beginners as the nail varnishes aren’t the best quality and the nail art pen isn’t the best either. They’re ones I will use but not ones I’ll be reaching for as regulars compared to others I already own. I think this set is one that could be worth getting as a treat for yourself or as a gift and, although it’s aimed at younger teenage girls I think, it’s one that older Pusheen beauty fans could enjoy too.