It feels a bit odd not doing anything Halloween this year, though I honestly ended up kind of forgetting about it in the lead up recently for some reason. I love Halloween decorations and movies and it somehow managed to creep up on me. I’ll probably end up watching movies and playing horror games for the next few weeks instead, November can be creepy right? Here’s a nice cute, fluffy Pusheen Christmas gift set review instead. 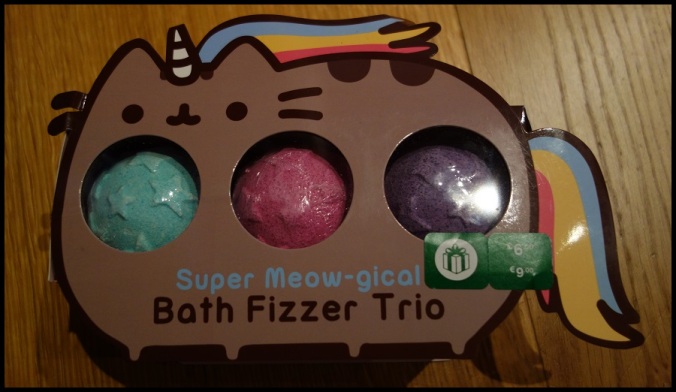 With the lead up to Christmas and so many gift sets out there I found a few that I wanted to try for myself and review for you guys. This is a small gift set with three bath fizzers in it from the Pusheen range at Boots and costs £6. It’s in the three for two offer they have on all of their gift sets around this time of year and this was the one I got free. I mainly bought it as I don’t have any bath bombs at the moment and was making a Boots order. I also may have a slight weakness for all things Pusheen and saw this after putting the nail art set in my basket. I’ll be reviewing that one later this week, or maybe next Monday depending on how long the nail varnish itself lasts.

This bath bomb set has a scent described as sweet and fruity so I was intrigued to see what that would be like, and how these bath bombs would work considering it’s a set for £6 and franchise products aren’t always the best quality for these kinds of things.

I think the main selling point for this is the Pusheen theme and the packaging is the only part of the set that really ties with that. It is a cute box but, after you’ve removed the bath bombs, I can’t see it being used much. My gerbils will be having some fun chewing it as I’ve removed the plastic windows so they’ll be jumping in and out of Pusheen but the writing on the front and widows make it less re-usable for storage. I do really like the unicorn Pusheen and it’s a cute set for a gift, I can’t see it being easy to wrap though!

The back of the packaging does have the ingredients for each of the bath bombs, the only difference I think is the colourants that have been used for each. There are a few warnings and instructions on how to use the bath bombs and they do all go with the Pusheen look with the font and the colours used but there’s nothing much there and no extra mini Pusheen graphics.

Each of the bath bombs is 100g, they’re a decent size for a bath but look small compared to a lot I’ve used before. The three colours all have the same scent, as far as I can tell having only actually used one in a bath. I have opened them all and smelled them and they have a sort of generic sweet, slightly floral smell to me. There is a vague fruitiness about them but they’re very powdery when dry, this does go when you drop them in the bath though. I guess the main smell I would say is like a sweet shop with a floral powder there, it’s a bit of an odd scent and seems like it could be overwhelming when you first open the plastic packaging but it does actually become less overly sweet when in the bath, either that or I got used to it.

These are pretty fizzy and the colour is fairly strong, the water ends up a slightly lighter version of the bath bomb itself and they fizz around for a while. They do dissolve completely quicker than some other brands but it does make the fizzing more bubbly.

I’m not sure that there were any benefits skin wise but it was a nice bath. The scent lasted and filled upstairs for the time of the bath, maybe half an hour or an hour before it disappeared. It isn’t as strong when in the bath as it is in the packaging, which was good for me as it’s pretty sweet, but it was there. It’s definitely not got the strength of more expensive bath bombs but I know some people find them a bit overwhelming so this may not be a negative for some people. The colours are bright but I didn’t have any colour transfer on the bath or my skin which is always a bit of a worry with brighter coloured ones for me with past experiences.

Overall this is a cute set, it’d probably be best for girls and I’d say it’s aimed at teenagers. If you know someone who’s a fan of Pusheen and bath bombs this might be a nice set for them but the scent itself definitely reminds me more of the products I used a lot as a teenager, and probably on the younger end of that, rather than a scent I’d choose as an adult. Then it does all depend on what scents you like. If you like really sweet or slightly floral scents then these might be a scent you’d enjoy anyway.

I’d say this is one of the gift sets that does work best as a gift rather than for yourself, I find that some gift sets this time of year are a good way to try new things and get a range that you wouldn’t normally or for a better price, this isn’t one of them. I’m undecided on whether this would be worth the £6 by itself as it wasn’t the strongest scent and you can get some nice bath bombs from other companies that will have a more obvious scent that lasts longer, getting it free as part of the offer though it is as maybe part of a present rather than the whole thing for someone. They’re fairly generic smelling but the Pusheen and the bright colours make it a bit different as a gift, nothing in the bath bombs themselves stands out.