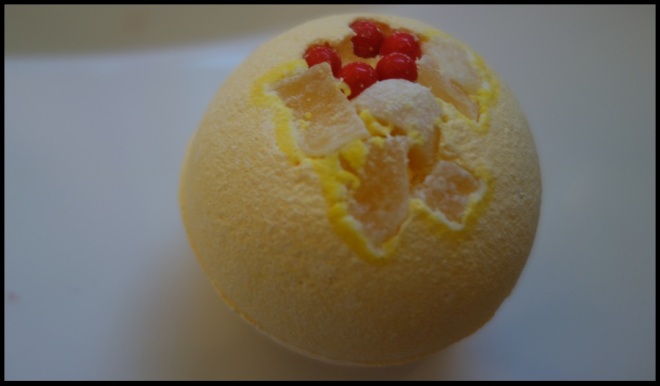 It’s definitely feeling like autumn and with these cooler days it’s the perfect weather for long hot baths. I’ve recently finished off the last of my bath bombs or bubble bars, I think this may be a first since I started buying them properly seven years ago, and mum picked one up as a present for me on her way home from visiting my grandparents. It was the Fantasy Island Blaster from Bomb Cosmetics, it’s a fair sized bath bomb at 160g and it was £2 at the service station mum went in, though it says they’re £2.99 online on their own store. I know they have stands in a lot of stores near me, mainly garden centres it seems, so the prices may vary from store to store or how long the stock has been there.

The ones online appear to have clear red balls on the top rather than the solid ones on the blaster I have. I’m not sure if this is something they’ve changed in the product since the photos were taken online, if this is an older batch that I got one from or if it’s just hit and miss with this.

I have had a few things from Bomb Cosmetics before and I know that my skin gets on with them but I do know that some people have a problem if they have sensitive skin as they tend to be more perfumey than some similar brands despite using natural ingredients. My skin is normally sensitive but this brand has been fine for me in the past but it’s just worth noting if you have sensitivities. As a brand they are cruelty free but I don’t know how many of their products are vegan friendly.

This bath bomb, or blaster as they call them, says it should have goji berries inside as well as the dried pineapple and orchid fragranced veggie bath pearls that decorate the top but I didn’t have any of the berries inside. I guess as they’re hand made it’s a bit of hit and miss as to which part of the mix you get, though I was happier without them in a way as it’s just more bits to collect at the end of the bath.

The scent for this is a true tropical fruit scent, it does come through the plastic wrap a bit so it’s fairly strong when dry but gets less sharp when in the water and mellows a bit as it fizzes. It’s pretty much passion fruit and mango to me and I don’t get any of the orchid scent from those little red balls on the top, though they did start to melt a bit they were still there, the white centre, when I let the water out at the end. Maybe it’s because I can’t have my bath that hot so they didn’t have the chance to melt away completely but I can’t see them adding all that much scent wise anyway. The scent is a more perfumey version of tropical fruit, like a lot of tropical bath products, rather than a fresh fruit scent, but I still liked it and it lingered throughout the whole of our upstairs for a few hours after the bath.

I was surprised at how bright the colour is, it’s almost fluorescent yellow, which I know could put some people off with it being a yellow colour, but it didn’t stain the bath at all which was nice. I’ve had brightly coloured bath products in the past that have, I’m looking at you Lush with the enchanter bath bomb that left me scrubbing the bath afterwards, which isn’t exactly what you want after a nice relaxing bath to have to spend half an hour scrubbing as the water goes out. The bits of decoration were a bit annoying, the pineapple stayed hard and was too large to go down the plug hole so I had to pick it out, next time I’d pull it off before I put it in the bath as I don’t think it added anything to it really.

I’m not sure that I had any benefit to my skin using this, then again it doesn’t claim to, but it didn’t dry it out like some of the fizzier bath bombs do. I found that after the bath I just used a moisturiser and my skin was fine. It did fizz well and dissolved quickly, it sunk to the bottom rather than floating as it fizzed but that’s not really a positive or negative to me. I did find that anything with bubbles didn’t work with this, I often find that shampoo sits on the surface when I wash my hair but this seemed to dissolve any bubbles pretty fast so it’s not one I’d say could be used in a bath cocktail with something bubbly. Not that it needs another scent but I know a lot of people like to make their own mixes, it’d work with other bombs or melts but nothing that you want the bubbles to last. 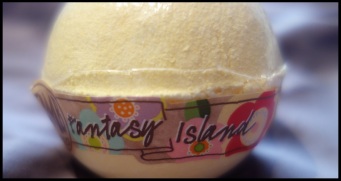 I know Bomb Cosmetics aren’t necessarily the most popular as, at one time, they seemed to copy other brands, or at least have a very close version on their site of other popular products, but I’ve found their products to be consistent and the kind of ones that I wouldn’t worry about not having any scent if I were to give them as a gift which is always a bonus and something that I have worried about or found lacking in certain brands in the past.

Overall I really enjoyed this bath bomb, it’s a good size, a nice scent that lasted and it didn’t react with my skin at all so it’s pretty much done everything I would ask of a bath bomb. It’s not got that fresh fruit scent like some do but it’s a nice bath bomb and a lot cheaper than some you get at the moment while being heavier and consistent scent and quality wise in my experience.