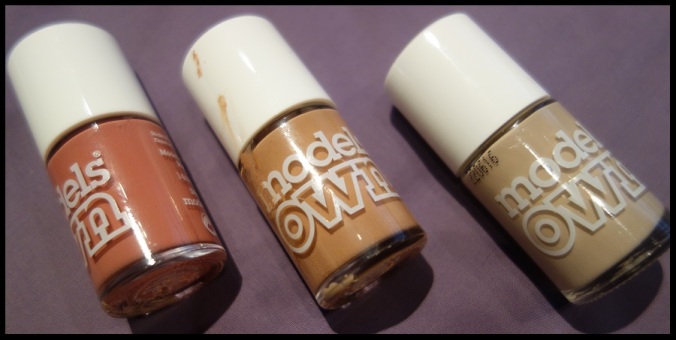 Models Own recently released the Dare to Bare collection, one full of products with neutral colours. These include Hypergel nail varnishes, an eyeshadow palette, semi-matte lipsticks (I reviewed a couple of them here) and a finishing powder. I love nude nail varnishes, especially in autumn, and I bought three out of the five nail varnishes available. The three I chose are Deep Tan, Skin Deep and Emperors Clothes, mainly because these three were the only ones available on ASOS at the time. These are available, along with the other two in the collection, on ASOS where they’re currently in an offer at £3.50 and all five can be found on the Models Own website where they cost £4.99 each.

Not to do with the nail varnishes but I bought these from ASOS, one arrived broken as you may see the remains of the nail varnish itself on the bottles. I have to say that the customer service I got was great, even when the form accidentally sent twice so I ended up with two conversations for a while. I got a replacement ,though unfortunately the wrong one first try so had to have a second one done, and it was all sorted within a week. Basically thumbs up for ASOS when it comes to sorting problems and I’d recommend them over Models Own due to problems in the past.

The nail varnishes in the collection are all neutral colours, though they have varying amounts of red in them, the two I didn’t get are Undertones, which appears to be a pale peach colour, and Suede, which is another pale colour and more pink based looking at photos online. The three I chose are closer to what I think of as nude colours, the palest being Emperors Clothes which is similar to the two I didn’t get in that it’s pale but it has a cooler, more taupey base I think.

All of the nail varnishes in this collection are Hypergels, the range Models Own do that are supposed to give that fake gel nails look so they’re a thicker formula than their standard nail varnish and do cover and ridges more, or at least with fewer coats. As with all of the Models Own nail varnishes the bottle is a straight cylinder, which I find makes them easier to store, and the lid has a larger handle than you’d normally find for nail varnishes which looks like it should be awkward to use but I actually find easier to control than a lot. I like the fact that it’s all white with the lid and the font, it does make the brand stand out amongst other nail varnishes in my collection though it doesn’t have the more expensive look that black would. It’s weird how that works but for me black seems to look more expensive with nail varnishes.

One difference between the Hypergel nail varnishes and the standard ones in the packaging is that these have a 3D sticker on the top in the colour of the nail varnish. I really like this as it means if they’re all stood up you know exactly what colour you’re going for, I wish more companies did this and they did this with their standard range too. Another difference is the brush, the brush in the Hypergel range is flatter and wider and has a rounded end. I think a few brands are doing these now and I do prefer them over the thinner ones as I get less overlap onto my fingers and two strokes covers it.

The formula for these nail varnishes is really nice, I’ve tried all three and they’re pretty much the same so there’s not hit and miss between them. They’re pretty thick, two coats would have been enough to be opaque but my nails are quite ridged, even after buffing, and I needed an extra one to make it completely smooth. It spreads evenly, especially as it seems to continue spreading and evening out as it dries, though it’s best not to have a thicker patch as it does seem to take quite a while to dry compared to a thinner layer, a bigger difference than with some other brands. Talking about drying time; these ones really impressed me with how quickly they dried. The first two coats I found that my first hand was dry when I’d finished my second so that’s a case of minutes. The third coat did take a bit longer, maybe five minutes before I was happy to put on the Seche Vite top coat but that’s still good for me. I was happy with the lasting power with these as well. I used them on my toenails over a week ago and it still looks good, no chipping yet. My fingernails have only been done a couple of days but they still look as good as new so that puts them above some brands I’ve tried in the past.

The colours themselves I really like, I am glad that these were the three I could get. I probably would have got all of them if they were available but having looked more at the others I don’t think I’d have used them as much. Emperors Clothes is a light nude, what I think is the closest to s standard nude shade in this collection. It works really well with my pale skin without making it look washed out which is good for a paler colour like this. I think that Deep Tan is probably the most orange in the collection and would suit people with a warmer skin tone as well. It’s still fairly pale, probably a mid tone, and looks good on my as an autumn colour rather than as a true nude as my skin isn’t tan enough. The final one I bought was Skin Deep which is a really nice warm terracotta kind of colour to me, at least I think that’s how you’d describe it. It’s definitely on the red or pink side of terracotta but still in that area and I think works well on me as a warm autumn colour.

Skin Deep is the darkest in the collection and, although it’s quite a bit darker than the three palest, I was surprised there wasn’t something darker than this with them calling it a dare to Bare collection as this seems too pink to me to actually match many skin tones as a naked shade. It is nice to see us paler people getting good nudes to match our skin that don’t wash us out but I think maybe one less of the very pale shades, especially with how pink the one looks, and another darker colour might have been nice for people with darker skin tones. I know it’s only nail varnish and it is nice seeing pale shades at last but it would have been nice to see a broader spectrum to me.

I am definitely happy with the three that I have, it’s a nice range of colours and they all suit my skin tone which is good when buying blind from online. I would say that Deep Tan looks oranger in person but the other two I bought are pretty spot on on the ASOS site. I think these are great neutral colours, especially if you have pale skin, and definitely worth picking up if you want a nice, cheap neutral nail varnish. Especially as they’re at £3.50 as I write this on ASOS, I’m not sure if that’s because they’re not going to be stocking them or something else but worth getting them from there if you’re happy to buy them blind online. 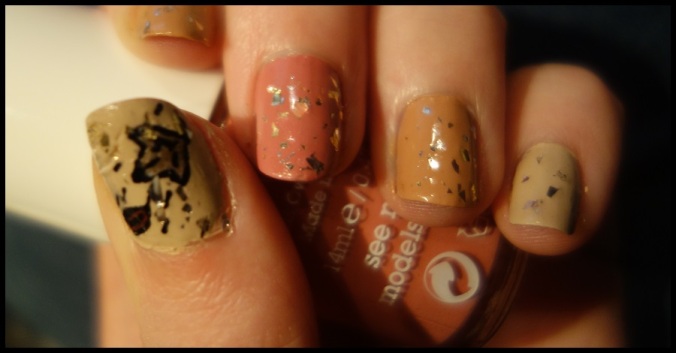 After doing my nails I decided to add a bit of nail art, well I guess it’s less nail art and more glitter on most of the nails. I used Nail Inc’s Magnetic Nail Varnish in London Town and Kensington Palace (not using the magnet I just love the colours and finish) for the leaves with the Rio Professional Nail Art Pen in black for the lines. On all of the nails I used the OPI Gaining Mole-mentum from the Muppets Most Wanted collection. I do love the rose gold glitter even if it is hard to remove.