Recently Models Own released a Dare to Bare collection which includes an eyeshadow palette, nail varnishes, semi-matte lipsticks and a pressed powder all in neutral colours. It seems like the semi-matte lipsticks are a product that have been released by different brands, I already have one some by Sleek so I thought it would be interesting to see what the Models Own version was like.

I chose two of the semi-matte colours, there are five in total, the ones I picked are 03 Kiss and 05 Naked, both of them are fairly light and are ‘my lips but better’ kind of colours. The colours appear very differently online to in person and vary quite a bit between the Models Own website and the ASOS one where I bought them. The ASOS website is a lot closer to the colour in person than their own site as they appear darker on the other site. These cost £6.99 each and have 4.5g (0.16oz) of product in them.

One thing about this range of lip colours that I really like, the first thing you see, is the card outer packaging. It has a nice neutral colour, towards the pink side of neutral, and a subtle blossom branch design on it. I can see myself keeping these though I don’t normally do that with lipsticks. They have the range name on the front and the side has the product name in different languages along with the ingredients. One thing I have noticed is that, although these two are different colours, they have exactly the same ingredients so I think it’s the same on all five of the colours. Each of the boxes has a sticker on the end with the name and number of the shade and the background is pretty close to the colour of the lipstick itself making it easy to tell which colour is inside if you keep it that side up. 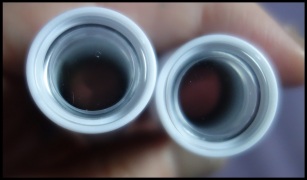 The lipstick tube is a bit odd in some ways, I think it’s the only one that I own that has a clear window in the top of the lid. It means you get to see the colour but it’s not that obvious and it just seems odd for a lipstick. The rest of the plastic packaging feels good but the fact it has half white and half the colour of the product does seem to make it look cheaper than some of the other drugstore level products you get in a similar price band. Both of the colours I chose are very close to the colours of the plastic coloured half, there isn’t much difference between the product in the stick to the plastic part. The stickers on the end are the same, very close colour wise and help you to tell which colour it is if you have that end up. I guess the fact that there’s the clear plastic at the other end means you could have the lipstick stood in any direction and you know which colour you’re getting. The twist mechanism itself is pretty stiff which means it does hold in place when you’re using it and it won’t accidentally twist up in your bag and make a mess in the lid. The way the lid closes does click closed nicely but it somehow does feel cheaper than other products, I think it’ll hold well over time though.

The colours available are all neutrals, though these I think are the lighter ones and those I thought I was most likely to wear. I don’t know how close any of them are to your natural skin tone if you have a darker complexion as it seems Naked is the darkest shade, I haven’t seen them in person, but both of these are nice colours if you have a paler skin tone. My skin is very fair and in the past there haven’t been that many good neutral lip colours other than really glittery ones for my skin tone so it’s nice that they’re releasing more. Although these are called semi-matte I’m not sure what makes them different from just mattes in general. The finish for these is pretty much a standard matte when you have blotted them, they feel fairly drying like mattes and they do need to be blotted to properly set. I know that a lot of people said about the Sleek ones that they don’t seem at all mattes when you first apply them and these do dry matte without the blotting but it takes quite a long time, after twenty minutes they still felt like they hadn’t set so I blotted them and it was an instant finish.

Kiss is a muted pink colour, though when it comes to applying the colour it does appear more pink on my lips than it does on my hand or in the tube. It does need a few layers to become truly opaque, one coat just adds a bit of a lint but going over it a few times brings it to the coverage I wanted. It does feel really soft and easy to apply, it almost melts on your lips rather than dragging them like a lot of mattes I’ve tried do. After about five minutes, even before it feels properly set if you touch your lips, it does start to make them feel dry. It’s not the kind of dry that makes your lips feel tight or the skin stretched and uncomfortable but more the kind that makes you feel like you need to lick them or add a balm onto them. This one is a nice colour from a distance but it does make my lips look really dry when you see it up close. I wore this one for four hours with drinking, having soup and eating and, although it did transfer a bit when it was wet, the colour stayed well and after the four hours there was still colour coming off on the makeup wipe. It wasn’t particularly noticeable on my lips but it must have still been there.

Naked is a more neutral colour, it’s definitely a slightly more mauve version of my lip colour so it doesn’t stand out that much to see the difference. Like Kiss it feels really soft to apply and doesn’t drag on my lips at all but it takes longer to appear and feel dry as, before I blotted it twenty minutes after application, it still looked like a normal lip stick, no matte finish but not particularly shiny either. After blotting it had the same feeling as Kiss, it left my lips feeling like I needed to use something to moisturise them but the colour stayed well. After four hours this one lasted as well as Kiss did, I ate and drank and it only transferred a bit when it was wet but the colour still stayed.

Both of the lipsticks survived well, there was still colour left on my lips even when it wasn’t obvious looking at them but I think that was more to do with the colours I chose than the product itself. It did make my lips feel dry and, in the case of Kiss, it made them look drier when up close than they did before. I wouldn’t say that my lips felt any drier after removing the colour than they were before which is a benefit compared to most normal mattes I have tried but I’m still none the wiser in the difference between a semi-matte and a full matte. I guess it’s the more moisturising formula of the lipstick, it doesn’t actually dry your lips out much or have that feeling of sucking all the moisture out of your lips even if it feels like dry.

I was impressed with these colours. They’re not ones I will wear all the time, as I’m not a fan of the dry feeling, but I can see them working well if I’m going for a meal out or something when I want the colour to last. As long as you’re not that bothered about a bit of transfer onto things, as I didn’t lose the colour when it did, then they’re good for meals and drinks. For the price I think these are worth it but it does depend on how you feel about matte finish lipsticks and your lips do have to be in good condition, mine are pretty good at the moment and it did make them look drier than they are. If they bring out more colours in this formula I would definitely consider getting them as they were well pigmented, lasted and are a reasonable price, even if you want a couple of different shades.

4 thoughts on “Review: Models Own Dare to Bare Semi-Matte Lipsticks”